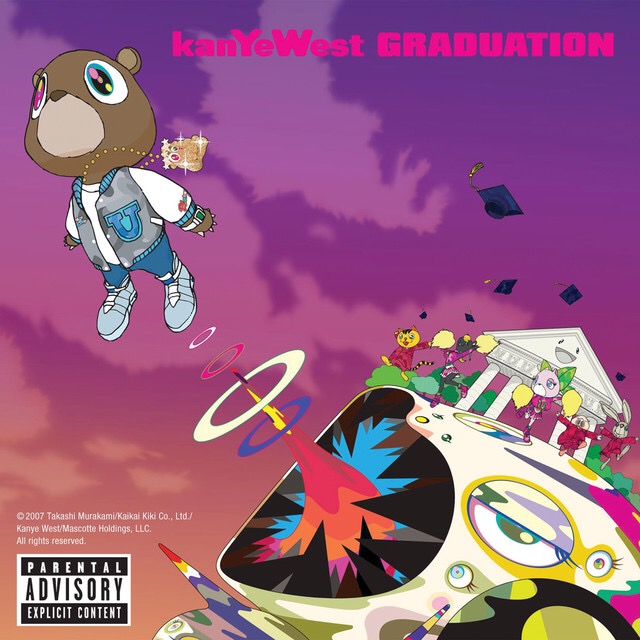 “Graduation” is my favorite album by Kanye West. I think it is fun to listen to, energetic and boasted some of his best bars and production. Below, I will rate the album, giving you my top 5 songs from it, in addition to the letter grade I think it deserves.

Wait a second, Kanye actually has feelings? That caught me off guard a bit.

On “Big Brother,” Kanye is spilling his feelings about the man that put him on (Jay-Z). I don’t know about you, but this song just comes across as a bit phony, to me. Deep down I don’t think Kanye likes Jay-Z, but hey, if they said we should believe they have a friendship, then I’m gonna believe it.

“Big Brother” has a significant build up, as Kanye makes his case on why he approached Jay-Z in the first place. The beat then shows it’s complete face near the end of his first verse, transforming into this rockstar-like anthem that mixes in some soul and hard hitting baselines.

I would describe the style of this song as storytelling. It is descriptive down to a tee.

4. CAN’T TELL ME NOTHING

Kanye sounds as arrogant as it gets on this track: He’s rapping slowly, aggressively, and nonchalantly. I wouldn’t be surprised if he was grabbing his nuts while laying his verses down in the booth. As for his content, it is finger pointing-esque, as he takes aim at his critics and wannabe’s

Jeezy’s adlibs on “Can’t Tell Me Nothing” adds a stamp of hood approval to it. Lord knows Kanye isn’t the poster boy for gutter, but Jeezy might be, so an occasional “YEA” or “HAHA” let’s the people know Ye has some certified hood support on this song.

“Can’t Tell Me Nothing” is great, and should be played before you go to court for child support payments.

“Everything I Am” starts with pianos that feels like it’s bringing you back to your childhood. It is immediately followed by some DJ scratches which brings out the 80’s rap dislodged deeply in your soul. It’s like Linus from Charlie Brown went to the club with DJ Marley Marl!

I love how “Everything I Am” switches tempos in the middle of each verse: It starts off sorta laid-back, then the pace picks up. It keeps your ears on edge, which is necessary for a track that is simple lyrically.

I thought saying that this was Common’s beat set the tone for this song. It pretty much let the listener know that he was gonna fit in to the beat even if ya’ll don’t think he can.

“Everything I Am” is the soundtrack to the ultimate underdog story. No soulful chorus, no major vocals, just honesty. All you need to do for a track like this is listen to Kanye’s words.

After “Flashing Lights,” it’s a roll of dice in terms of what the next best song is on this album — I chose good life.

What you have to keep in mind about “Good Life” is the time period when it was created: T-Pain was on top, Kanye was happy, and there was a lack of quality music. Nowadays, T-Pain works at Pier 1, a few new quality rap artists such as Kendrick and J. Cole have arrived, and Soulja Boy is dead.

The most important aspect about “Good Life” is it’s glow: It’s exuberant and full of energy. Kanye is coasting through his verses without a care to appease. It’s refreshing and natural-sounding.

T-Pain’s adlibing and content on the chorus to this song is chilling, as it’s effortless, but at the same time powerful.

“Flashing Lights” is the best song on “Graduation,” and there really is no contest. Kanye West is that one artist that shines when he lets everyone else on a song shine, and on this song, he lets Dwele, the beat, and the dull-voiced lady robot shine bright!

You would think Kanye’s rap style would give in to the cinematic feel of “Flashing Lights,” but it doesn’t, and that’s why we love him! To sum it up: The structure of this song is like a luxury restaurant, and Kanye is trying to pay for his meal with food stamps in that restaurant!

Dwele’s part is the absolute opposite of Kanye’s: It’s passionate, heartfelt, and appropriate for the production. When you mix that in with Kanye, you get a blend of two unique styles, which usually tends to lead to beautiful art!

“Graduation” is very underrated, and I think that is because, in a way, it feels very innocent. The fact that the album feels innocent is significant, because it is coming from Kanye West, who today, is someone comparable to Satan. All jokes aside, Kanye plays with several different moods on this album, and opens up in ways that he doesn’t in person or in his future albums.

What’s bittersweet about this album is its timing: It was released a few months before Kanye’s mother’s untimely death, so it really displays how his life was before losing a part of himself. His problems he describes on this album are minuscule as opposed to what he battles with today. How do I know? Because I lost my mother around the same time, and I can relate to the struggle that presents itself thereafter. I’ve always appreciated this album more than the next person, and ask for your forgiveness if you think I overrated it.

MAKE SURE YOU LET ME KNOW WHAT YOUR TOP 5 SONGS FROM THIS ALBUM WERE!