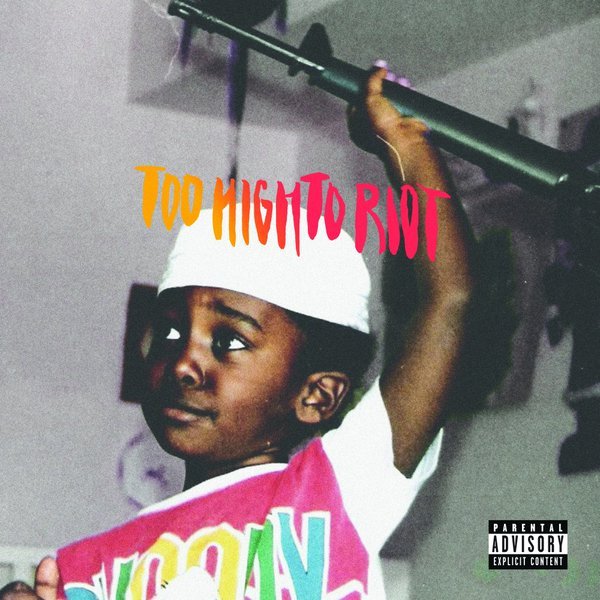 Too High To Riot is the sophomore album (not many people are aware of his first album ‘Last Winter’…I know…I know…) by non-other than Dreamville Records own – Bas. For those of you who heard ‘Revenge of the Dreamer II’, there is no doubt you are left with two obvious takeaways – #1 – Bas is a rapper that embodies a perfect blend of lyricism that include tales of righteousness and ratchetness. #2 – You became very familiar with a song called ‘Night Job’. On this song, J. Cole has a line that would seemingly prove to describe who Bas is and the eventual title of this album:

In a world filled with tragedy and triumph, Bas manages to overcome his many life obstacles by being Too High T…….. Y’all get the point. Now let’s get into this album review!

This is a great rap song. The beat is very refreshing and lively. I would classify Bas as an addict that is extremely aware of his surroundings and the state of society. Bas has been hitting them Xan’s so much he can’t even remember what unfolded the night before. To be fair – by the name of the album, this is not a surprise. The feature by The Hics adds a cool dynamic to the song. They give the song that crossover potential while still maintaining the quality of the music. Bas, you should be gaining a lot more fans after this one!

This song is dope as hell! I feel that this song is the epitome of Bas’s style. Bas has the uncanny ability to rhyme on beats in very unorthodox ways. His content is extremely raw as he states that “My best pick-up line is young ni**a with money”. The 90s Teddy Riley west coast talk box used throughout the song is a great touch that only music nerds will appreciate.

The sample flowing throughout the song is amazing. Bas finds his way in and out every time just before the sample drops. He clearly understands how to write a song, because one thing that you’ll notice is that there is always a heightened level of structure to his songs.

Bas is talking that typical rapper talk on this track. So bring out the money, hoes, bottles and every other hip-hop prop you can think of!

I cannot stress enough how talented of a rapper Bas is! His supreme delivery should be noted and on every track you can hear his struggle practically jumping out of the speakers. He is very open about his life from the drugs he takes constantly, his love for white women, his inability to trust people, and him missing his homies who are dead and gone…

It’s not a mystery that J. Cole is backing this guy. They’ve know each other for a long time and Cole has been one of Bas’s biggest supporters even when Bas was hustling in the streets of New York with no plans for his future. This is introspective rap for those who like this type!

This is a very interesting song. For those of us that have never tried Methylone, it is yet another drug that has been adopted (in this case unknowingly) into hip-hop’s drug community. After this song, Bas may be making a late push for the Xanny Family oval office, which is currently being occupied by non-other than Future.

Long story short – Bas was popping pills which he thought was Molly, but it was only after using an at home drug testing kit that he later learned was in fact some random drug named Methylone all along. He then thought to himself, what if life was as black and white as the results of a drug test? What if you could use a testing kit on someone’s true intentions and even their heart? Wouldn’t things be much simpler that way? These are great questions…questions that can only be formulated by a Methylone induced individual…so thank you Bas!

Nevertheless, this type of out of the box thinking mixed with the melodic hook make for a great song. Enjoy!

Let me just start by saying even though this song was featured on Revenge of the Dreamer II, you will be hard pressed to find a more complete song. The combination of Bas’s delivery/flow, metaphors on this smooth beat is similar to when Mark McGuire and Sammy Sosa used to hit homeruns during the MLB steroids era….It is beyond a normal homerun!

The chemistry between Bas and J. Cole is organic and effortless. Just listen as they go bar for bar taking turns rapping in and out of the verse. You can tell that they push each other to create some of the most surreal and deep lyrics that they are capable of producing.

This song is easily at the top of the album!

This is a really good album. It was well thought out from the beat selection, metaphorical lyrics, structure of the songs and down to the adlibs. Bas got a chance to formally introduce himself to the hip-hop world with his memoirs in the form of music.

His style and presence has a special place in music for people who appreciate quality music. Even though he’s cut from the cloth of J. Cole, he was able to stand alone and with this album his core and potential audience will get a chance to understand why he should and WILL be taken very seriously!