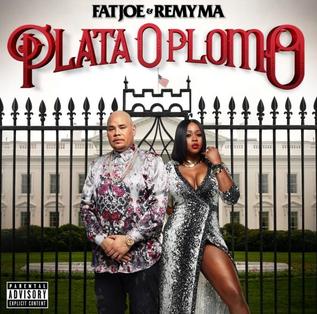 Is it fair to say that Fat Joe and Remy Ma are the closest thing to Kim and Big in todays hip hop? With Fat Joe being such a polished veteran in the game, he is able to provide this star appeal that translates well into major club hits – Remy Ma is a bit more street than Joe, bringing this gutter MC sound; when you combine the two styles, you should be excited as a hip hop fan for this album.

‘Warning’ is a really tough record by the duo, as it has this heavy hitting street sound to it that sets the tone of the album wonderfully.

Kat Dahlia makes an appearance on the track, giving it this pop sound that is absolutely misleading when you actually pay attention to her lyrics (She talking about people dying without anyone knowing – Baby girl that’s cold).

In all honesty, both rappers could be a bit better lyrically on this song, but I think their main goal was to give off this tough ass sound delivery-wise instead (which they accomplished).

To say this is an interesting sound for the rappers on this song is an understatement, but it definitely fits what The-Dream is trying to do. I’ve always felt like The-Dream had this voice that fits happy-go-lucky tracks like this one, so he totally nails it.

Remy and Fat Joes parts are so laughable to me, but at least they gave us a few sing-along lines throughout their verses. NY thugs simply don’t sound right on songs like these.

Can this song get club burn down the line?

‘Cookin’ sounds like an angrier/more lyrical version of ‘All the Way up’ doesn’t it? It’s like ‘All The Way Up’, but after standing in line at the DMV for two hours.

This song might be the best lyrically on this album: The NY sounding beat helps Remy and Joe go back to their roots, as they are way more aggressive on this track than the others.

If there was ever a second single sounding song I heard in my life, this is it! It sounds like the safe second single that the A&R tells you to release when you’re poppin’ for the first time.

Ty sounds sensual on the song, but still keeps his gangsta ass lyrics on fleek. BTW, will he ever take that damn sudafil for his stuffed up ass nose sounding vocals?

It’s a love song, but Joe brings that OG/cook cold crack sound to his verse on this one; I would think that if he had this ability to spoil her, he wouldn’t have to come off so aggressive!

Remy is a boss ass chick isn’t she? She just comes across like a lady pimp on this s–t. Why do I feel like Remy can book me?

This is one of the only songs on this album that is good all the way through.

At 46, Fat Joe might hold the record for oldest n—a to get the club jumping with this song!

While I love Fat Joe’s wit, French Montana’s catchy ass chorus, and Remy Ma’s tough verse on this song, I think the beat is the biggest highlight! When you combine the knock from the bass with the trumpets, you get this beat that demands your attention. As a lyricist, it should be a dream come true to rap over this s–t.

This album is the definition of the word ‘Meh’ to me… Don’t get me wrong, the album has a lot of good stuff on it, but it never exceeds good at any point.

Lyrically, Fat Joe is not great, as I feel like he’s trying too hard to say the coolest thing that comes to mind; while Remy for some reason sounds extremely off on her delivery (maybe it’s a new style of rap she wants to create.). Maybe I put these guys in too high of a regard, but I was pretty disappointed in their contributions.

The best part of this album is the contributions from everyone else: Production-wise, they picked some hard knocking beats that give you a flashback to NY rap in its hayday, and also some beats that incorporate the joyous pop-hop sounds of today. Feature-wise, the 20 contributions from Kent Jones were surprisingly useful, and the R&B choruses we’re definitely needed.

This album is not great, but I’m not sure Fat Joe ever made great albums to begin with anyway.. I’ll tell you why you need to enjoy it though: Enjoy it because it is truly a rap album and not some rappers trying to be singers type s–t.