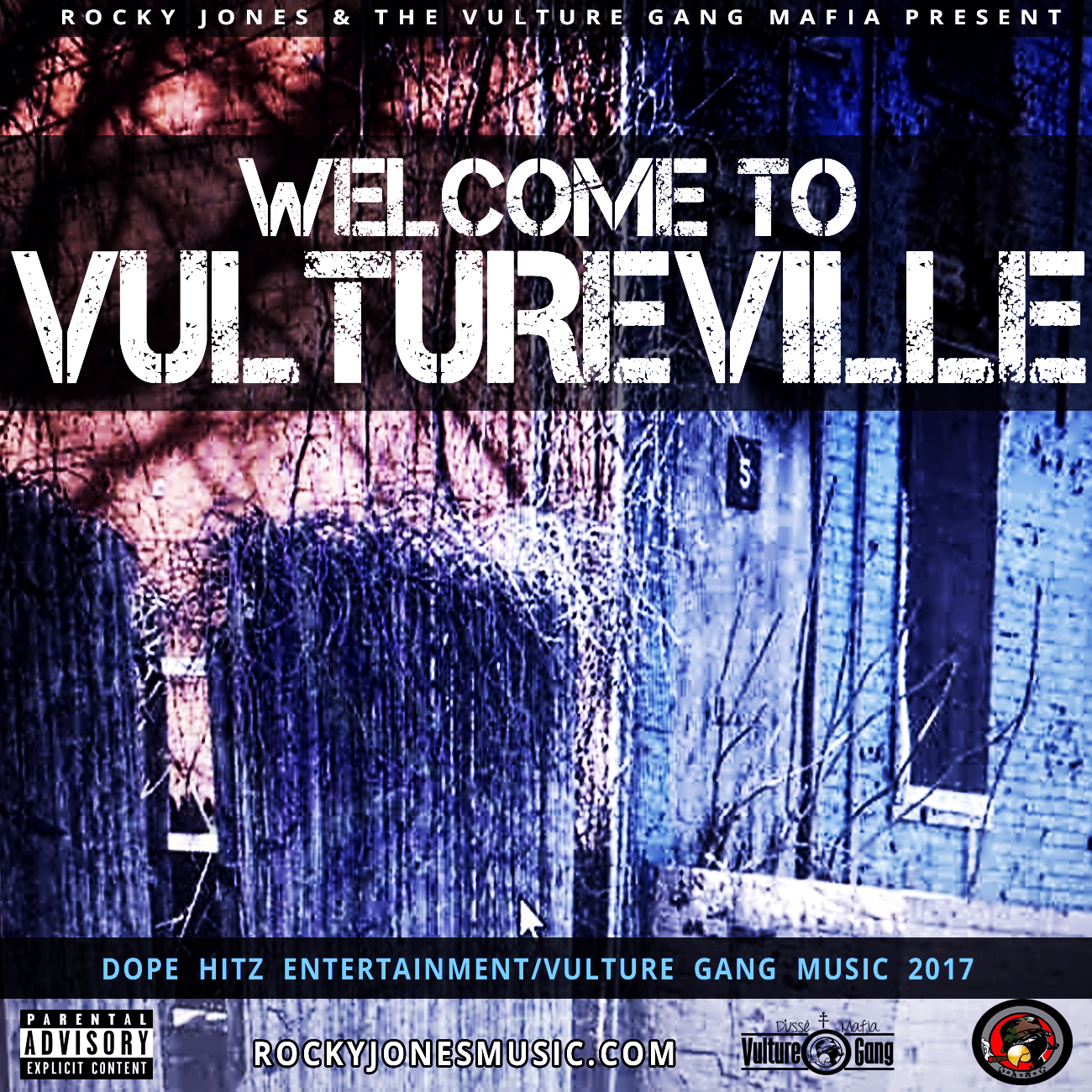 Rocky Jones has been on his grind these last couple of years, resurrecting that hustling spirit that seems to be missing in rap nowadays. With his hot new track ‘Single For The Summer’ prepped for a June 20th release, Rocky looks to expand on his growing fan-base by winning over some of the listeners that are in the mood for some good vibes for the summer. In the meantime, I look to rate Rocky Jones new project called ‘Welcome to Vultureville’, in which you get to hear just how special of a rapper the NJ native is overall.

‘New Years’ is a toast for all the accomplishments Rocky has achieved thus far… It is also a toast to the haters too (That’s thoughtful of him to acknowledge the haters).

The beat is very laid back on this song, which will more than likely have you nodding your head throughout. Rocky takes advantage of this sound by flowing in this nonchalant way. Content-wise, Rocky comes across as motivated, as he talks about the ups and downs that he went through in the past year. Regardless of what happened, Rocky decides to still champagne pop, turning up for the new years like he deserves to.

Something about a rapper saying some real s–t on a laid back beat is always real to me!

BOOMIN’ IN THE TRAP (TIE)

‘Boomin’ in the trap’ is that tough ass track that banned any smiling during its making.

Though I consider the song to be some tough s–t, the beat does have these club elements to it that is very infectious. Rocky takes advantage of the club sound the beat gives off, laying down this gutter ass chorus that is the perfect setup for all the savage lyrics you get from each rapper.

The first verse is some scary s–t, with Slang entering the song sounding like a super villain. Even though I am hiding under my bed listening to his verse, I get some solace from the fact that he is being a little laid back on his lyrics. Overall, I think his part is the perfect compliment to the usually cool Rocky.

Rocky does this s–t in his sleep, hitting us with his usual witty bars. I feel like the beat is perfect for his style, as it allows him to do some of those dynamic things rap-wise.

‘I Got It’ has this gutter sound that was created for Rocky’s persona! You will definitely enjoy the flash back in time the song gives off, reminding you that old school hip hop will always rain supreme.

Rocky takes advantage of the bop that the production provides by dropping jewels on every single rhyme. He mixes in some real s–t with his past drug dealing ways, delivering something inspiring to his fans all over.

I think the hook on this song is very dope! It just reminds me of a few homies chillin’ on the footsteps in the block having a quick cypher.

On ‘My Money (Intro)’, Rocky talks about his love for money, but also warns listeners about the potential horrors it can cause for you.

If you are a fan of Rocky, you know that flossing is something he doesn’t mind rapping about, but on this particular song, you get this humility from him that is noteworthy. On his verses, Rocky gives advice on how you should move when the money starts coming in, giving specific examples on what he did to find solace with it. Though the song is short, the message will definitely resonate with you.

‘Dusee & Champagne’ is a song in which Rocky flips Snoop’s classic ‘Gin and Juice’ record, making his own Vulture gang inspired version.

Rocky’s demeanor when he raps is beyond solid to me! He comes across as laid back on tracks, delivering his bars with this ease that is similar to the greats. On this song, he nails the delivery, mixing in some catchy phrases with straight bars. Overall, Rocky was able to create this picture perfect depiction of a party full of beautiful women, poppin’ music, and of course lots of good drank!

Slang opens the song up, and he hits us with some street s–t that fits the dramatic beat perfectly. To me, every word he spits seems authentic, as he represents that goon of the group that will never be walked over.

Rocky has the second verse, and he brings the conscience element to the song. As usual, Rocky glides through his verse, talking about the struggles the people are going through in the hood. I think I like hearing Rocky get political on tracks.

Nezz brings some animation to the song, portraying this general that is great at motivating the wolves. He doesn’t hold backin his words, keeping it 100 from start to finish.

Mega closes the song out, showing tremendous wordplay from start to finish. His verse is tough as hell, as he uses some very clever punchlines to proclaim his superiority in the rap game.

If you are a fan of real rap music, you will love this song.

Rocky brings that hunger for rap every time he hops on the mic, something that I’ve always appreciated as a music fan. No matter the sound of the beat, he comes with the same tenacity, ensuring the listeners that the lyrics he is giving us is all the way real. To take it a step further, Rocky does such a great job of painting pictures of what he’s gone through, almost presenting to us an autobiography through the music (Isn’t that dope?). Overall, he is very relatable, and even more so engaging as he delivers his rhymes from song to song.

All in all, if you like some ‘all the way’ real rap music, this is a project you should check out for sure! Rocky and his crew doesn’t disappoint, as they cover all bases when it comes to authentic hip hop. I find this album to be refreshing, and something that I will go to whenever i need that lyrical fix.