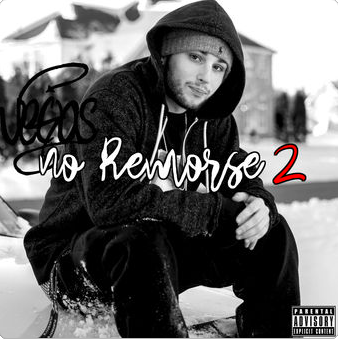 It ain’t hard to tell that Devin Vegas is one hungry MC. On the first installment of his “No Remorse” series, not only was he the main dude you heard rapping, but he also wrote, mixed, engineered, mastered, and produced everything you heard. Less than three years later, Devin is back, delivering yet another complete project full of hefty bars, unbreakable flows, and real ass content in “No Remorse 2.”

“Switch Sides” is hood emotional, and has a nice little tempo to it. I think it is the perfect representation for what the album is all about, which is street inspired hip hop that combines dynamic rapping with some of the most brash lyrics you would hear in music today.

I feel like Devin and Young Dutchie play the perfect tandem on this song. They feed off of each other pretty well, bringing the same explosive energy on both of their verses.

Much like “Switch Sides,” Devin isn’t playing with folks in “Active,” taking aim at his enemies by reminding them that he’s all about that action when it comes to street wars. You’re going to love the aggression that Devin raps with on the track, as he delivers some pretty heinous threats through some very relentless bars. As the song goes on, you can hear Devin noticeably getting angrier and angrier, barely taking a breath in-between lines. If I were to guess, chairs were flipped over, walls were punched through, and pictures were knocked over during its making.

Each artist featured on this song (Vegas, Young Dutchie & Rugga) drop some real ass verses that I think is relatable to your average bachelor. They touch on topics such as obsessive arguing, reckless behavior and gold digging habits from their now exes, showing this nonchalance that I think perfectly describes how your typical guy feels when we know a relationship ran its course.

The fellas on this song showcase some pretty decent artistry, dropping some heavy bars but at the same time doing a little bit of singing, too. No need to worry, folks, everything sounds organic, as each spitter gives reasonable justification into why they decided to move on.

“IDK” is an absolute club banger!

You know what I find very unique about this track? It mixes in some pretty tough bars with this very infectious rhythm. As expected, both Devin and Young Dutchie are ruthless content-wise on the track, never sweating a chick or shying away from riling up their opposition with relentless lyrical blows. Nothing about the song is soft, which is why I can see this track being perfect for amping up a restless audience.

Devin is an open book on “Nevermind.”

The production on “Nevermind” is cold, but Devin raps with this impassioned style on his verses. It’s almost like he’s using his bars to let out some stress, as he battles with the idea of conquering the world all by his lonesome. I love the rigorous approach he uses in his delivery, and think his lyrical content is as candid as it gets.

Devin Vegas’ love for rap music is evident. In all 23 of the tracks on this album, he raps with this passion that will ooze through your speakers. Aside from that, the Long Island rapper shows off a myriad of skills musically, singing, rapping, and even combining the two whenever he gets the chance.

“No Remorse 2” is a must-listen. Make sure you check out all 23 of the tracks on all the major streaming services. Also, don’t forget to let me know what your top 5 songs off of the project is in the comments section.