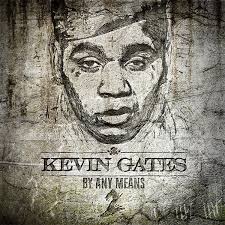 Think about all the rappers that ended up doing jail stints when they were in their prime: You got Tupac, Wayne, Tip, Gucci Mane, and now Kevin Gates. Even though I associate Gates with this group, something about his stint is a little different than the other rappers I mentioned in that list. I feel like Gates is this highly spiritual guy that has a lot to say, so when you put a muzzle on him, I anticipate all those bottled up feelings to manifest itself on a platform like this album.

I never really saw Kevin Gates as this lyrical assassin, but on this song he definitely gives off this persona that traditional rap fans will love.

I always knew Kevin can drop a pretty decent verse when he wants to, but not like this. On ‘Attention’, the Louisiana born rapper shows off his ability to drop some very tough bars, also showing that he can flow in many different ways. Sounding like a complete boss, Kevin imposes his will over the track, making sure the numerous blows that he delivers is accepted by the listeners.

‘GOMD’ by Kevin Gates has a completely different sound than J. Cole’s ‘GOMD’. I feel like Kevin Gates version literally sounds like he had some leeches on his d–k.

I hear a little bit of Pac in this song, but it’s mainly just Kevin being Kevin (Hurt and paranoid).  On the hook, Kevin sounds very cold, reminding me of a mob boss that is ready to blast his gun on anyone that tests him. As far as his verses, he is very revealing on it, giving personal stories that explain why he has become the individual he has become.

This is that one song that will make you miss the hell out of Mr. Gates.

There is lots of  harmonizing on this song, and I would want it no other way! Kevin Gates delivers a passionate performance throughout, reminding the people that his grind isn’t stopping despite the issues that he comes across on a daily basis. Like he’s done in the past, Gates was able to come up with something both catchy and emotional, sounding like a preacher for the streets.

This song is strictly for the motivated, as PnB Rock starts it off with this passionate/sensual hook. Gates feeds off of PnB Rocks contributions, doing his best to make an anthem for the dogs out there that doesn’t mind spilling their guts out.

While I think their collaboration works, PnB Rock definitely outshines Gates on this song.

Kevin Gates has a message for you from jail: “F everybody” (Phone drops).

Kevin Gates is adamant that he isn’t looking for our love on this song, and I feel that sentiment on every bar he drops. While at times Kevin can be a little light-hearted with his content, on this song he is nothing less than serious, as he sings and raps with this numbing sound throughout. Overall, the song sounds eery, and almost like a posthumous effort (Weird right?).

I’m not going to lie, I missed the hell out of Kevin Gates while he was gone. I find something about his style to be highly unique, especially since everyone wants to sound like Migos these days (SMH). On this album, you get classic Gates, which means you get some well written hooks and lots of realness content-wise. You can tell during the making of these songs that Kevin had tunnel vision when it came to what he wanted to accomplish, and that was a consistent body of work that had no influences from the outside.

I feel like this album is simply OK. With Gates being locked up behind bars, Most of the duties pertaining to this album were handled by his wifey, so if there was any major changes he wanted to make, he was simply unable to (Maybe that’s why the album flows a bit weird to me). But when it’s all said and done, I am happy to hear from the Louisiana boss again.