A Boogie Wit The Hoodie – The Bigger Artist (Album Review) 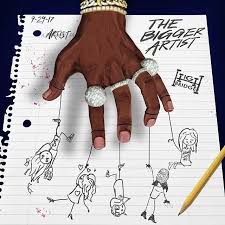 You won’t find a bigger fan of A Boogie Wit the Hoodie than me! With his carefree Harlem style, Boogie makes sure he catches our attention in ways that are both unpredictable and unconventional. With ‘The Bigger Artist’ (Which I find to be a pretty blah title), the 2017 XXL Freshman looks to dive into rap stardom head straight, making sure we all understand the importance of joining his wave early on in his career.

The trio of PnB Rock, A Boogie Wit The Hoodie and YoungBoy Never Broke Again exhibit this grittiness that is refreshing to hear if you are a hip hop fan; they are like the rap version of the Oklahoma Thunder big three of James Harden, Kevin Durant and Russell Westbrook when they were on the come up.

Maybe I’m crazy, but the energy level on this song is a bit lacking to me on all fronts….Other than that, I find this song to be extremely solid. In their own special way, each rapper imposes their will on the beat, touching on their ballerific yet hood lifestyles. As expected, PnB Rock stands out the most, but A Boogie and Young NBA’s criminal behavior sounds the most believable to me (That should count for something right?).

You can never have too many Sesame Street sounding rap tracks, especially when you add savage ass lyrics like this to it.

On ‘Say A’, A Boogie shines brighter than he’s ever shined solo, sounding like Mr. Rogers drug dealing, gun toting, African American cousin. Overall, I like the pace that he raps with on his verses, barely taking a breath in between lines.

‘No Comparison’ is on some mafia/GodFather type s–t, led by this cold ass Metro Boomin’ produced beat.

For majority of this album, I find it hard to believe that A Boogie is this cold-hearted thug, but you cannot deny that his tough talk on this song does hit a chord a little. I love how he aggressively calls out his rivals on his verses, letting them know that nothing they can do can match up with the savage s–t he’s capable of doing.

I like the combination of A Boogie and Metro Boomin’!

I like when rappers get all mushy like this, especially ones that rely heavily on harmonizing and melodies like Boogie. On this song, A Boogie opens his heart up all the way, showing a side that his dark skin friends probably never seen.

Metro Boomin’ never disappoints when it comes to providing a complete instrumental, and in ‘Get To You’, he literally made his contribution sound like an artist. I feel like the beat Metro created literally exudes a myriad of emotions, almost sounding like the woman that A boogie is having issues with.

This is the song that will make you see A Boogie as more than an average rapper.

This isn’t just the best song on this album, it is also one of my favorite songs of 2017 too. I love the fact that these two hood rappers decided to embrace this opera-like sound.

A Boogie absolutely kills this s–t! He raps with such a good pace, combined with some young flashy lyrics that sounds good on the beat. Throughout his verse, I feel like he drops his bars so effortlessly, making the song feel laid back from start to finish.

Kodak Black always sounds gutter as hell to me, and even though this particular beat is gentle, for some reason they compliment each other pretty well. I love that Kodak’s bars are a bit comical on his verse, further proving my theory that he is one of the more charismatic rap artists in the game.

I’ve played this song 50 times in a three months span.

From the moment you press play on this album, you can tell A Boogie wanted to do everything he could to convince listeners he wasn’t your average artist. It is evident Boogie tried to showcase his versatility from song to song on this album, catering to both the hardest of thugs and glossiest of women out there. Both approaches certainly fit his unique style, which is why I think this debut is one of the more dynamic hip hop releases this year.

The production on this album is pretty good! With help from superstar beat makers like Metro Boomin’, DJ Mustard, and Murda Beatz, Boogie got a chance to be setup nicely before even saying a word. He does rise to the occasion when it comes to each beat though, never letting any of them outshine him. (One of the key elements to next level success in rap is to never let the production outshine you)

The features on this album were pretty decent… I preferred the features from dudes on the come-up like him (aka Kodak Black and PnB Rock), and really disliked the ones from the superstar artists (Robin Thicke and Trey Songz). I will say that I’m impressed he was able to collaborate with these guys though, because their presence alone will draw a few fans his way (fake fans are still fans).

All In all, I feel like this album is a less crazier version of a Lil Uzi Vert album. He has LOTS of radio friendly hits on it, but at the same time has a few throwaways too. Nonetheless, there is lots of good energy on it, and most importantly, lots of teenage mutant n—a carelessness too!