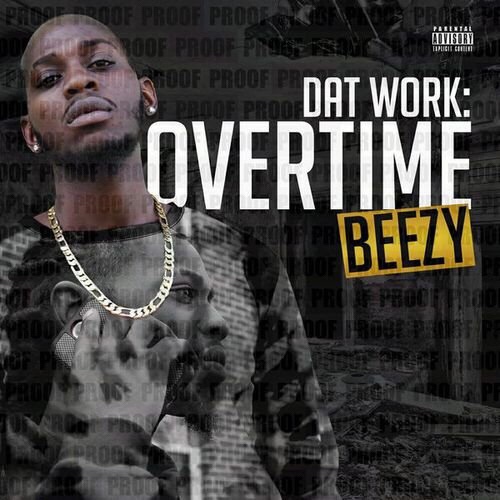 It’s not very often that you come across a rapper that is able to display as much confidence as Beezy does in his raps, yet still remain true to himself content-wise. Not only does this make for some pretty satisfying music, but it also creates this level of engagement between the artist and the listeners that is as close-knit as it gets. With that being said, I expect ‘Dat Work: Overtime’ to speak directly to me when I hear it, as Beezy gets his chance to tell the world his underdog story.

How cocky is the approach that Beezy takes on this song? We’re only at the intro to this album, and he already decided to spit over this triumphant instrumental that indicates that he’s reigned supreme over his competition! I ain’t mad at it, because I’ve always felt like the throne should be snatched and not politely handed over. Anyway, over the amped up beat, Beezy raps in this unorthodox way that gets more and more aggressive as the song goes on. When it’s all said and done, the track gives listeners a quick reminder of how astute of a rapper Beezy is — especially when he’s given an intense beat like this.

If overtime Is Beezy’s victory lap, then “We Good” is his theme song.

On “We Good,” the proud southerner let’s the world know the type of force he is over some heinous production. On each bar he drops, blows are delivered to his haters, as they can only sit and watch as he dissects the beat like an absolute pro.

Not only is this track tough, but it’s also a bit of a “put you in your place” type moment for his critics.

If I were to guess, “Bigger RAX” will end up as one of the main singles for this album, because it has this infectious sound to it that I think lots of hip hop fans will enjoy (especially club goers). On it, Beezy shows off a couple of musical skills: An ability to harmonize, switch flows, and giving us something that is catchy as hell. Content-wise, he gives us something a bit galvanizing, as his lyrics focus on getting to the money while staying true to his hood.

This is as complete a Hip Hop song will get.

There is absolutely no smiling on ”Go hard,’ just a sinister beat that is accompanied by focused bars from Beezy. Believe it or not, I think this is his best sound, because it allows him to be this menacing figure that I think puts fugazzi rappers in their place.

“64 Barz” contains nothing but pure/unadulterated bars by Beezy, which means competition should be terrified!

Throughout his rap career, Beezy has shown that he can spit in a variety of ways, which to me shows his great versatility. But there is one rap characteristic that I think he shines the brightest in, and that is delivering some serious punchlines. On “64 Barz,” punchlines is all you get, as Beezy drops verses that contain some pretty good metaphors — and those metaphors power his overbearing persona. All In all, it’s a lyrical exhibition like none other.

Every hustler out there deserves to brag and boast a little, right? Well on ‘Bodies,’ Beezy cleverly uses the word ‘body’ to describe his success rate when it comes to woman, money, and violence. He does this through this infectious melody that fits like a glove over the summer-like instrumental.

On a couple of tracks on this album, Beezy has shown a pretty decent ability to harmonize when a song asks for it; on ‘Flexin on Em,” he goes full out crooner! What I do find impressive about his singing on the track is that he was still able to maintain this gutter sound throughout, finding a way to flex on em without sounding like a pushover.

Don’t you believe every threat that Beezy drops on this song? It’s like his street card is valid thru 2055, or something….

Do you like rap songs that have a horror movie feel to it? If that’s the case, you will love this track!

Over this slow tempo’d/dark instrumental, Beezy uses this zombie-like approach to let the people know how him and his homies are living. I’m not going to lie, the song sounds pretty unique, as it combines two different styles that you would’ve never guessed would cross paths.

You know what I like most about “Big Knots?” The topic at hand shows us up and coming hustlers the correlation between ‘hard work’ and having the ability to splurge. In one phase of the song, Beezy sings passionately, letting the world know about the trials and tribulations he had to go through to get to the money; while in the other phase, he lets the world know how fabulous it is to be in the winning side of the fence.  It’s like an emotional roller coaster for listeners, one that can have you feeling both club and calming vibes.

“Double Time” is easily my favorite track on this album!

Isn’t this song the perfect outro to the “Dat Work: Overtime” album? It definitely leaves you wanting more, as Beezy ignores all possible distractions and simply gets to it lyrically.

Based off the way Beezy’s rapping on the song (His stretching out of lyrics to add emphasis on his content, the fast flow he utilizes, and the strong punchlines he delivers) you can tell he wanted this song to feel like a final exam for listeners, as he aims to quiz us on how much we learned from the last 9 songs we heard prior to this one.

I was thoroughly entertained with this album! I feel like Beezy created a project that catered to all of my hip hop needs, and as a rap junkie, I couldn’t ask for more. Aside from that, his passion/hunger is a major factor onto why his words will stick out at you, as he somehow makes you feel like you personally knew him through his lyrics. I know 10 tracks is a bit of a small sample size, but on each track Beezy will leave you feeling like you got your money’s worth, something I think will make you want to join his wave.