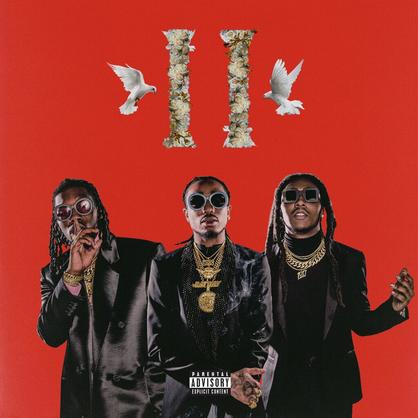 Whether you like it or not, Migos are leaders of the hip hop culture right now, and to me, they confirmed that in their previous album.  Not only did ‘Culture” have a myriad of hits, but I feel like the style they rapped with on the album was also emulated by everybody and their mama! So could you imagine if they had that same impact with “Culture 2?” Let’s find out…..

Migos and their underdog story comes to full fruition on “Made Men,” as they give us a couple of humble bars over this sentimental beat. No we don’t have as much money as they are talking about having on this song, but for the first time in a while I feel like these dudes are close to human.

With the song having the underdog feel, it’s only fitting that Takeoff shines the brightest on it. Not only does he drop this powerful hook, but he also sets the tone for the track masterfully. is 2018 the year Takeoff finally take’s off?

I f–ks with both Quavo and Offset’s verses, especially when they drop meaningful lyrics. I don’t think a single word was forced by either of them, something that makes the song sound extra authentic.

If “Made Men.” doesn’t make you do that proud father smile after listening to it, you must’ve grew up extra privileged!

After hearing the album in its entirety, you will appreciate “Stir Fry” a lot more.

With majority of the songs sounding like each other on this album, ‘Stir fry’ is that one track that has the group doing some experimenting. Over this quirky instrumental that has Pharrell’s name written all over it, each member in the group gives us this spirited performance, rapping with their usual style at times and in others rapping with this crowd-galvanizing one.  I actually think quirky works for the trio, mainly because their erratic flows are capable of coming alive over any unorthodox beat.

If you asked me how I felt about this song earlier, I would’ve told you that I thought it was “Aight.” But as time went by, I started to like a few things about it, and now I view it as one of their hotter tracks on this album. One thing I really like about “Motor Sport” is that neither member in the group is trying to out-stage the other; they simply speak their s–t and let the ladies do their thing. Do you realize how polite that was of them?

Cardi B’s verse is pretty good on this song, as she gets all competitive for us. I feel like she has lots of noteworthy bars on her part, even referencing her relationship with Offset on it. Cardi B definitely won this song, to me.

Nicki Minaj only raps to put people in their places these days, and this is one of those songs where that mentality actually fits. While I can dig her aggression, I think her punchlines are a bit weak on her verse.

When Gucci Mane and Migos link up, they usually make hits.

“CC” is your clichè bando track in which each rapper discusses their love for ice, drugs, and big booty thots. I ain’t mad at it, though, because that’s when they sound their most natural.

Quavo hasn’t been my favorite member of Migos the last couple of months, but on “CC,” he channels that version of himself that was killing hooks 1-2 years ago! I love how he rides the songs amped up beat, dropping this dynamic hook that is exact with its words. Honestly, I can care less about the other two members of Migos on this track, I’m OK with letting Quavo be the QB, RB, and wide receiver for this song.

This is one of Gucci’s best verses ever! (Yea I said It!) Gucci takes his time with it, laying down some lyrics that are both clear and concise. Anytime you can get a clear and concise Gucci, you have to appreciate it like a new born baby.

I hear similarities to “I Get The Bag” on this song…..I’ll let it slide, though.

Can you believe it’s been five years since Drake and Migo’s “Versace (Remix)?” I listened to the track the other day, and the swag that Migos came with on it was so far behind Drake’s at the time. It’s funny how s–t can change in five years.

A herky Jerky hook, dark instrumental, and lots of brotherly love dominate “Walk It Talk It” (That’s a helluva combination).

On their respective verses, each rapper gets a chance to tell the world about their trill ass personality, each saying two or three things that will make you want to punch them in the face. I like the animation Quavo raps with on his verse, love the confidence Drake raps with on his, appreciate the flow Offset brings to his verse, and feel like Takeoff’s grittiness completes the track. It’s truly a dynamic collaboration.

The song has a great rhythm to it, but straddles the thin line between catchy and annoying.

There was a comment I read about Migos on Twitter that I thought was pretty funny: Someone said they don’t think Migos has 24 songs worth of vocabulary to use on this album. While vocabulary (Or the lack-thereof) hasn’t historically been a deal-breaker in hip hop music, I do think a lack of lyrical substance is, and after listening to all 24 tracks on this album, I’ve concluded that they aren’t talking about s–t on it!  Too many times I found myself yawning at their subject matters, and when you combine that with average music, it starts to sound extra ‘blah’ (As a hip hop artist, you never want to sound blah). They do have a few bangers here in there, ones that I think you should extract from the album and mix in with your other hot s–t from 2018 (See My Top 5). I also like when the group deviates from their typical sound, deciding to challenge themselves musically on tracks like “Narcos,” “Gang Gang,” and “Stir Fry.”

So the million dollar question is: “which member of Migos won this album?” in my humbling opinion, it was Takeoff. I think his hunger was evident for each song he was featured on, giving the album a true Hip Hop feel. I think Offset coasted through the album, sounding a bit uninspired, and Quavo tried a little too hard to be a pop star on it.  Maybe Takeoff wins by default?

So the five hundred thousand dollar question is: “Who had the best beat on the album?” Migos did a great job of spreading out production responsibilities, even letting their guy Quavo get involved at times. I think this makes for an album that sounds a bit erratic, and personally, I prefer that consistency/cohesion you get when one producer produces majority of an album. With that being said, I love the ‘Flooded’ beat, and can definitely get down with “Made Men”

So the .009100 Bitcoin question is: “Who had the best feature on the album?” Drake. His verse really pumped some adrenaline into the album, especially when it entered that dull middle stage. Aside from the 6 God, I liked Post Malone’s feature quite a bit on “Notice Me,” and thought Sean came pretty tough on “White Sands.”

You know what’s scary? I’m not sure Migos can hold onto their Culture title by the time “Culture 3” releases. I feel like they sound like themselves on this album, but something about the results simply weren’t the same. The good thing for the group is that our peers will hammer the album into our heads, so I’m sure we will get 9400 opportunities to become believers in it. Worst case scenario, I will enjoy the album for every ad-lib they bless us with. (God Bless these ad-lib kings!)