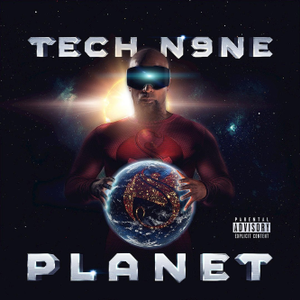 At the tender age of 46, Tech N9ne has not lost a single step yet. He is still able to break down beats as easy as ever, giving us his signature tongue twisting style on whatever type of production you give him. In his newest album “Planet,” Tech looks to continue his reign as the boss of strange music, delivering a body of work that is sure to be the most unique thing you heard this month.

On “Drink Up,” Tech N9ne is an advocate for alcoholism, and I wouldn’t mind being his running partner.

There is nothing simple about Tech N9ne when he raps, which probably made you think that you were going to get a complicated track by him here, right? Not exactly… On ‘Drink Up,’ Tech N9ne takes a more simpleminded approach to rap, uncomplicatedly (can’t believe that’s a word) spitting about the many things that go on in his head when he’s around liquor and women. For majority of the song, it comes across as an anthem to the real ones out there, and in others, it sounds like a song that was made by a stubborn kid that doesn’t want to be put in timeout.

I freakin’ love how Tech dissects this songs beat!

That bad Juju occurs when you pick up money from the ground in Nigeria.

I feel like Tech N9ne has dropped some of the most interesting songs of his career this year, with this foot stomping/African fight song proving my theory to be true. Tech definitely does his thing on the track, rhyming some of the most interesting words together on his verses. I love the overall approach of the track, and can appreciate its “Shithole Country” roots (SMH).

This song would’ve been perfect for the Black Panther Soundtrack.

“No Reason (The Most Pit)” is carefree — a sound that I think fits everyone involved in its making.

There is not a better sight to see (or hear for this matter) than a couple of frustrated underdogs. Just like in sports, when we would underrate the Tom Bradys and the Kobe Bryants of the world, they would usually come out with this “I got nothing to lose” type mentality, which typically results in defenders getting their asses kicked. Well that’s what you get on this song, a track in which Y2 gives off this numbing vibe, Tech N9ne challenges the norm, and Machine Gun Kelly demands your upmost respect.

I’m sure listeners will enjoy the rapping ability everyone showcases on their verses, but I think its the fed up lyrics that each rapper drops that should be paid attention to the most.

“Sho Nuff” is one of the many tracks on this album in which Tech lets the world know about his success story. In this particular episode, It’s truly nothing but good vibes, as the Kansas City native gives us these celebratory bars over this dreamy instrumental.

For those of us (Like myself) that didn’t think Tech was capable of making that heavy-hitting club banger, “How I’m Feelin” will prove us all wrong. Not only is it catchy, but it also has this infectious bop to it that will involuntarily make your ass shake.

Navè shines bright as hell on this song, approaching the track with confidence comparable to Trigga Trey. I like his energy on the hook, and feel like his swagger really gives the track that boost it needs.  Tech and Snow Da Product take care of the rapping responsibilities, exhilarating the listeners with immaculate bars, unhinged flows, and lots of competitive lyrics. When you add the two styles together, you get this explosive track that never lets off the gas pedal.

Snow Da Product seems so infuriated on this song. Whoever is stealing her flows needs to stop!

I’ve never really been the biggest Tech N9ne fan on this planet, but I’ve always felt like he was an underrated rapper in the game. No he doesn’t mumble rap or use auto-tune in his music, instead, he is able to make tracks that are unique and extremely lyrical. Knowing his lane, Tech never really deviates from it on this album rap-wise, but he does experiment from time to time with different genres such as Pop, Gospel and even African Jazz.

The rapping on this album is an A+. Throughout, Tech shows off this ability to break down beats like an absolute lumberjack, giving us dynamic flows and out of this world wordplay. However, what surprised me most about this album was Tech’s content. Through you had times in which he showed off his ability to be a bit of a savage, for the most part, this album boasted positivity! I loved when Tech rapped about our beautiful culture and rise to success, but also enjoyed how he was able to mix that in with I wish a n—a would-esque lyrics. Nothing seemed forced from the boss, something that makes his words stand out even more.

I can honestly say that there isn’t a bad song on this album. From start to finish, Tech N9ne keeps listeners entertained by being unpredictable when it comes to features, instrumentals, and topics. Though we find ways to put rappers like himself into these little boxes, I think this project will make you say “F–k that box!”

I WANNA HEAR YOUR TOP 5’s FROM THIS ALBUM IN THE COMMENT SECTION!