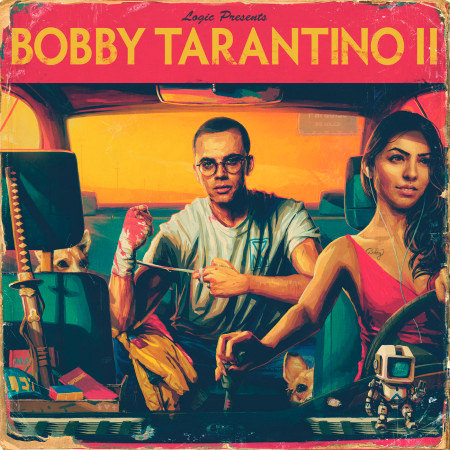 Last year, Logic got his sentimental album out the way with ‘Everybody’ — a project that focused on racial equality and practicing the act of kindness amongst each other. Today, it looks like he is back to his ass kicking ways, releasing the follow-up to his “Bobby Tarantino” Mixtape from 2015. If you didn’t know, his first Bobby Tarantino album was fiery, containing unapologetic bars, sick ass beats, and this care free version of the rapper that his day 1’s loved. I expect much of the same on this second installment, which might catch his new iHeartRadio ass fans off guard.

On “Boomtrap Protocol,” Logic blends a couple of sounds together, creating this absolute banger that is perfect for a turn up session.

Logic kills this track lyrically, but I think its his daring vocal performance that stands out the most. Not only does he aim to break a few glasses on the catchy ass hook he drops, but he also utilizes auto-tune quite a bit. Teddy PenderLogic anyone?

“Wassup” is one of the toughest tracks on this album, and it contains two of Hip Hop’s quirkiest rappers going back and forth about putting some respect on their names.

Big Sean is one of the few dudes in the game that can keep up with Logic in all phases of rap, so it is to no surprise that he put up a pretty solid verse on this song. On it, I like the wittiness the Detroit native raps with, as he aims to hit us with a bunch of rhymes that reminds us how competitive he is whenever a mic is close in sight.

Speaking of competitive, is there another rapper that is more competitive than Logic? On his verse, he starts off pretty gentle, but ultimately turns into this ass kicking machine that is intent on holding the instrumental hostage. It’s not a matter of whether or not his verse was better than Sean’s, the real debate is whether or not he took a damn breath while he was rapping.

Initially, I hated “Everyday” due to its pop roots, but it’s grown on me since then. Now I don’t hate it, I only want to punch it in the face (That’s a huge improvement!).

From the moment you press play on this track, Logic gives you nothing but energy. Whether its his boisterous lyrics or rambunctious singing, he sounds excited as hell on it, which translates to this fun-loving tune that has him literally sounding like a child that just found out his school was closed due to a snow day.

From time to time, Logic focuses on having a good time when he raps, releasing records that have colorful instrumentals and loosey goosey lyrical content. That is what drives “Overnight,” a fun tune by a blooming rapper that is enjoying his unforced stardom, hefty bank account, and rise to the top that sorta caught a few people off guard. Correct, his raps are solid on the track, but I think the focus for this song should be on the bangin’ instrumental and energetic vibes.

“44 More” is simply a lyrical exhibition by Logic. From start to finish, the Maryland rapper destroys the hypnotizing beat, showing off a myriad of flows throughout. Content-wise, he discusses topics from world domination to his hustling ways, sounding like a guy that’s obsessed with being great. This is the version of Logic that I prefer to hear, and unfortunately, you only get a little bit of it on this Mixtape.

First off, I love both the album artwork and the intro to this album! I feel like recreating that whole underdog feel on the artwork to this Mixtape was genius, especially considering the fact that Logic could’ve lost a lot of his true fans when he went on his little pop journey late last year. As for the Rick and Morty skit, I loved the creativity of it all, as it further tapped into that nerdy side of the Gaithersburg rapper that isn’t ashamed to admit that he likes things other rappers are probably too cool to admit they like. I thought those two aspects were a good look for him.

Logic’s rapping on this album is unbelievable! He gives us crazy flows, shows lots of grit lyrically, and most importantly, reminds me of the Logic that was on his grind trying to make it to the top of the rap totem pole a couple of years ago. I have no complaints when it comes to that department.

One thing I didn’t like about this album was all the damn singing Logic was doing. Don’t get me wrong, he can certainly hold a note, but I feel like lately he has been relying on his singing ability a little too much when he makes music. Yes, I know that at times it is appropriate to show us you care about a certain topic by harmonizing, but too many times I felt like he was half-assing his singing on this Mixtape, almost waiting for someone to tell him: “Hey, can you stop messing around and get serious.”

I thought the features were pretty pointless on this Mixtape. Correct, Logic called on some of hip hop’s heaviest hitters for this project, but strangely enough, I don’t remember a single word any one of them said on their verses. Is it because Logic blew them out of the water with his far superior rapping ability? Or is it because their styles simply don’t match with that of Logic’s?

I’ve always felt Logic has had the right tools to be considered one of the best rappers in the game, but just always seems to be missing something that can take him over the top. I think those sentiments perfectly describe this Mixtape, as I see “Bobby Tarantino 2” as a body of work that has some of the hottest verses I’ve heard this year, excellent beats, but still missing that one thing that can make me feel satisfied overall…