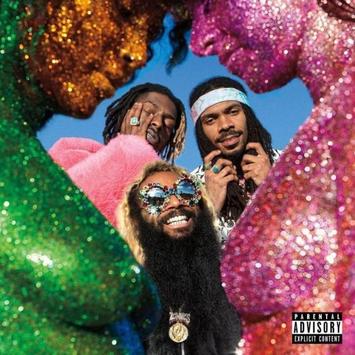 The Flatbush Zombies are not quite household names, but if you are a fan of raw/unadulterated rap, these guys might be just for you. Each member in the crew has bars, they each have unique styles, and their cohesion when they make music together is pretty solid. In this 19 track project, the crew looks to win over even more fans, as they attempt to bring outlandish hip hop music back to the forefront.

For some odd reason, I like “Chunky” despite it sounding like a joke at times. It starts off with Meechy Darko sounding like a mad man, using this grouchy approach to randomly let the people know all the vacations he has planned out. The song eventually turns normal, as DIA gives us something melodic on the post-hook while Erick Arc Elliot and Zombie Juice drop two pretty solid rap verses. But when it’s all said and done, it’s Meechy’s bizarre contributions to the track that makes this song special.

“HELL-O” isn’t even a song, it is a formal introduction to the crew. There is no hooks, no major ad-libbing , just every member in the crew dropping these animated bars over this menacing beat. Am I scared? Absolutely.

”Leather Symphony” is a good combination of both street and Beethoven-esque. A$AP Twelvy and Zombie Juice are the only two artists featured on the song, and they each take advantage of the dynamic beat by laying down these exhilarating verses that has them celebrating the grind it took them to see success. I love the chemistry on the record, as it feels like their main goal was to show unity between both crews in NY. (Especially with the Yams shoutout)

“U.I” is soulful, it’s real, and different. Everyone featured opens up more than they did on any other song on this album, each painting a picture revolving around brotherhood, this crazy world, and their tough come up. When it’s all said and done, I wouldn’t be surprised if these n***as cried during the making of it.

For all the people that love club music, “Vacation” is perfect for you! On it, the crew have a little bit of fun with it, each providing the track with these appealing bars on their verses. I love how the group gives us something melodic on the hook, lyrical on their verses, and rowdy in-between. If that’s not enough to draw you in, Joey Bada$$ is also featured on the track, and he makes a Giannis Antetokounmpo reference!

Don’t let the outrageous artwork fool you, these dudes were actually able to put together a versatile/astute body of work with this album. I know we all expected the bars to be tremendous on the album, but I’ll be honest, I didn’t expect them to have so many different sounds on it. Whether its the clubby “Vacation” or the sentimental “U&I,” the band shows they are more than capable of emulating your favorite rap artists of today.