Ugly God – just a lil something before the album…(EP Review) 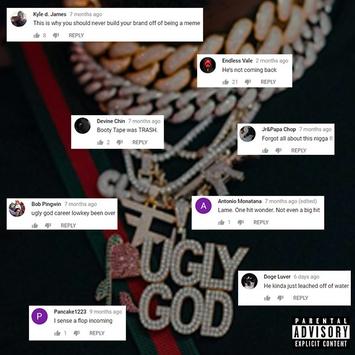 Ugly God was nice enough to drop off a 4 track EP in anticipation of his new album. It’s safe to say that hip hop was blessed today.

I have reason to believe that Ugly God’s rap skills has improved since he first emerged onto the scene with “Water.” Don’t get me wrong, he’s still no better than Nas suffering from concussion like symptoms, but it feels like he’s gotten a tad bit more serious about the music he’s putting out. With that being said, “Leave a Tip” contains a version of the rapper that merges both worlds, as he continues his reckless ways, but at the same time, gives us something that flows steadily on the beat and is a bit comparable to what everyone else is doing. I repeat, I thought dude was awful when he first came out.

Splash Drexler sounds confused on this track. You can’t have such a historic name and sound confused my dude.

“Tropics” is one of the most shameful bangers I’ve heard in my life. It’s part nursery rhyme, part strip club induced, and part remedial.

Ugly God’s skills are beyond choppy on this song. At times, he spits some real s**t, flowing decently. Then in other times, he stumbles on his words, and hits you with the most childish lines you would hear in your lifetime. Not only is it an inconsistent effort from him throughout, but I am also pretty sure he doesn’t know how to spell ‘inconsistent’ based off the s**t I just heard. With that being said, let loose and let the 15 year old in you have a blast listening to its catchy roots.

There isn’t much to see here. Ugly God continues to have some appeal to him (Stupid appeal, but still appeal), as he navigates through the album touching on random yet interesting topics such as petty beefs, asses clapping, and spiking party juices. However, my biggest takeaway from the album is that the former computer science major has officially developed a sound for himself that is slightly distinguishable from his peers. He typically raps in this nonchalant way over 808 boomin’/colorful beats, utilizing its most stand out features to his advantage (i.e. the claps you heard on “Tropics” and how he used it to make a point. I’m on to his artistry, and I kinda like it!