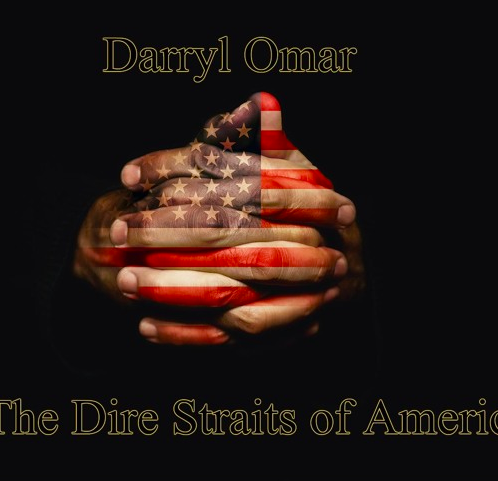 DMV Darryl hails from my hometown, the DC metropolitan area, and he’s one of the few MCs in the game that has this willingness to keep it all the way real on a variety of controversial topics. On his newest project, “The Dire Straits of America,” Darryl looks to leave the meaningless records we’ve been hearing in hip hop lately to his peers, and opts to focus on music that contains a message instead. Lets keep it real, we don’t get enough music like this on a daily basis, so I’m going to go ahead and indulge in this ten track project for the next couple of minutes.

“Land of the Flee” is nothing short of fly. Over this bass boomin’/vibrant instrumental, our hero touches on a myriad of topics such as being a slave to the money, materialism, and avoiding the gold-diggers of the world. His bars come across as both honest and poetic, and it feels like he never stresses a single bar on both his verses and the hook. It’s definitely put together really well.

Part of “Godwin’s Law” is a heinous diss track towards Bill and Hilary Clinton. I can honestly say that I didn’t see that coming.

Is there any instrumental that encourages more heinous bars than Biggie’s classic “What’s Beef?” instrumental? I feel like it’s tone is so sinister that it will make you want to diss your own momma if she ain’t down with your beliefs. Anyway, over this altered version of the classic beat, DMV Darryl goes at individuals he sees as modern day Nazis, calling out what he perceives as crooked behavior, unfavorable laws and racist behavior. The way he raps on the track feels like one big peaceful riot. I’m always down for a peaceful riot!

On “Sippin’ On Some Aqua,” DMV Darryl flips the classic “Sippin’ On Some Syrup” track, delivering this candid tune that has him questioning our youth’s infatuation with luxury items, the government’s lack of empathy for the Flint water crisis, and giving some advice on how we can represent ourselves in a respectful manner . The song has this clubby vibe to it, and is probably the most catchy on the album.

In “Devil’s Poison,” DMV Darryl gives us a lesson on the history of drugs in the black community. The instrumental that he raps over is both soulful and colorful, and the flow that he raps with is pretty steady. But what I love most about the track is how direct he is in explaining the many reasons he believes drugs are bringing the black community down, showing no fear of calling out names and even giving his own fortright advice on the matter.

DMV’s Darryl’s urgency to call out individuals that abuse drugs on this song is well needed.

1. HOME OF THE BRAVE

There are a lot of powerful songs on this album, but “Home of The Brave” might take the cake as the most powerful. It’s rebellious nature will resonate with you, as DMV Darryl holds nothing back when it comes to taking aim at the US government. I love how indignant he sounds on his verses, as he aims to unite his people through some pretty heavy-duty lines.

Production-wise, this song has such a great bop to it, prompting listeners to nod your head through some heavy-hitting baselines. DMV Darryl does a great job of riding the beat, starting and ending his bars masterfully.

DMV Darryl  sees it as an obligation to speak his mind when it comes to a myriad of  issues, and doesn’t hold back a single moment on this album. Throughout “The Dire Straits of America,” you get music that is fiery, knowledgeable and raw. On it, Darryl isn’t the type of artist that wants to out-rap anyone or give us some gimmicky s**t, instead he approaches each and every song like it’s a rally, making sure listeners digest his powerful words. Aside from that, the 10 track project has a couple of polished beats that range from soulful to clubby, and I love how Darryl gets lost in them every chance he gets. (I love when artists take the time to appreciate the production they are rapping over)

All in all, “The Dire Straits of America” is a short but sweet canvas that I think true hip hop fans everywhere should take a listen to. I do caution you, there’s a good chance you might not be able to take the candor he delivers on it.