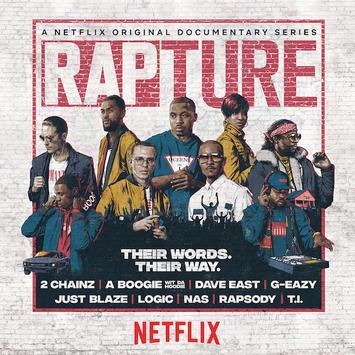 If you haven’t seen Netflix’s Rapture show yet, drop everything you’re doing and watch it. It’s a very entertaining series that follows some of our favorite rappers in the game around to find out where their brand originated from. As a special treat to their fans, the good people behind the documentary was able to gather all the artists featured on the show together for this six track project. Today, I rate it.

I’m convinced that anytime you let T.I. rap over an old school/detective sounding beat, he comes out with fire.

T.I. may not be the most sought after MC these days, but that doesn’t mean he lacks appeal. On “Care To Say About It,” the Atlanta based rapper drops something vintage for us, spitting with this patchy flow and coming across like a veteran pimp both lyrically and vocally. It definitely reminded me of music from his prime-time years.

Rapsody can spit, and she is probably better than 90% of the rappers in the game right now, so when she has reason to want to kill some s**t, she’s damn there Golden State Warriors impossible to guard. On this track, she throws hay-maker after hay-maker at the 70’s inspired instrumental, clearly showing an interest in proving anyone else in the world that doesn’t believe she can rap wrong.

Watching G-Eazy’s episode of Rapture taught me that he has this low-key want to be one of the best rappers in the game, and this song confirms that.  in “Let Me Work,” a Just Blaze production, he comes out swinging like a heavyweight boxer, delivering blow after blow over this triumphant beat. Initially, I thought it was weird that they chose G-Eazy to open up the soundtrack, but after listening to the track, I see why.

“Nycha” contains two New York rappers spitting tough over this smooth instrumental. Matter of fact, I wouldn’t be surprised if it was written and laid down on the steps of an apartment building in Queens-bridge.

The wordplay on this song is nothing short of amazing. The way both Dave East and Nas are able to put their words together so seamlessly shouldn’t be ignored at all.

This project contains six solid tracks that accurately show the hunger, influence and rapping ability of some of the most focused rappers in the game. It’s nothing special, just a solid body of work that compliments the outstanding Netflix series perfectly.