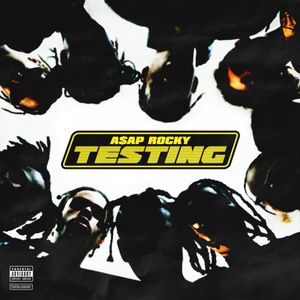 This whole trend of rappers randomly releasing albums without even releasing any singles has been slightly frustrating. First of all, avid piraters no longer have the means to illegally upload s**t anymore, which means great American companies like Napster have seen a disturbing trend of unhappy users. Secondly, and most importantly, for artists like yourself, a warm up track or two would be nice. Out of the last five tracks you’ve released, four of them were unfavorable, and the other one was OK, and that was simply because I was multi-tasking while I was listening to it. You haven’t quite been on your A game as of late, Flacko, which has cast doubt in many. With this new album called “Testing,” I have a feeling that you recognize fans like myself’s frustrations, and was looking to release something that is so experimental that even if you hate it, you can’t knock it because you stepped outside of the box. But I say, f**k the box, Flacko, I’m going to need hear some heat or I’m demoting you to the second best A$AP 😤.

While listening to this song, I felt like killin’ a n***a in some jump rope.

In this very experimental album, “Praise Da Lord” serves as one of the simpler tracks. With the instrumental being fast in pace, A$AP and Skepta trade verses largely centered around flexing and the sticking out of thine chest. In my opinion, A$AP goes off on his verse, riding the flute-heavy beat pretty flawlessly. Skepta also rides the beat well, opting to use the infamous start and stop flow that made the Big Tymers legends in the game.

Do you realize that we are living in an America where a UK rap feature is no longer unheard of? That will never happen in DMX’s era.

What a random combination of artists A$AP got together for this track (T.I., Moby and Kid Cudi). With such an epic lineup, the track does give off this epic feel, boasting this cloudy instrumental that has bass so strong that it can knock off the 96′ Bulls. Fortunately for us, A$AP goes ham on the one extensive verse he has on it, rapping as aggressively as you’ve heard him rap before.

With the first track on this album feeling like this reintroduction to the self-proclaimed, Pretty Flacko, this track feels more like an ass kicking session for his foes. Throughout his rapping, our hero reverts back to his reckless Harlem ways, paying homage to his day one homies while talking about his habit of disrespecting our beloved women. It’s Flacko in the purest form, and I love every second of it.

I’m starting to like T.I. more when he talks rather then raps. I feel like his words always strike a chord with me, especially when he’s on some bigging up s**t. As for Cudi, his emotional lyrics add quite the plot twist to a song that is already high on dramatics.

I love that this song turns into a 90’s Sade jam at the end!

“Brotha Man” sounds like the Good Times intro under the influence of PCP.

There was a couple different things that A$AP did on this song that I found amazing: First off, he allowed French Montana to takeover the song with some pretty decently laid down harmonizing — something I didn’t see as possible literally three minutes ago. Secondly, he was able to get Frank Ocean to sound like the toughest n***a out of the three of them (Correct, “Forrest Gump” making Frank Ocean sounds the toughest on this song) And last but not least, the Harlem native was able to make this soulfully based song sound like perhaps the toughest record on the album by instilling a few gangsta lines here and there into it. Very well done, A$AP.

“Buckshots” is bizarre, but really good. It sounds half interlude/half song, but it’s lively instrumental, slick lyrics and infectious hook all catch my attention. I also like it’s unorthodox nature, as A$AP made sure to throw us all off by mixing random ass sound bites with trill ass lyrics and some unknown crooner taking over the song at the end.

“F**k Sleep” will be everyone’s favorite song on this album. It has an infectious melody, controversial lyrics towards the police, and a bizarre ass feature by FKA Twigs. It also has mainstream appeal, but is organic enough to get that coveted creative stamp of approval.

This song sounds like it was made by two passionate homeless people. Correct, I hear fire, but I also felt like I needed some hand sanitizer after listening to it.

This is A$AP Rocky’s best work to date. His artistry is put on full display on this album, which means it might take some time for you to fully gauge its sound. I don’t know about you, but that’s what I f**kin’ want from an artist I listen to.

Based off the sporadic nature of this album, I am convinced that A$AP is still under the influence of LSDs. I don’t think it’s possible for a normal human being to mix together some of the sounds I heard run rampant on this album. With that being said, the various producers he worked with had to be in the zone during the making of it, cause on some on real s**t, it felt like I was listening to the musical version of “The Cell.”

The features on this album were fantastic! I feel like everyone brought something unique to the table — even if it was something as simple as adding some ad-libs to a track or stepping outside of their comfort zone on a verse laid down. Most importantly, I love how A$AP pieced everything together, playing the role of orchestrator phenomenally.

Despite his experimenting, questionable fashion and constant AWOL behavior, the one thing that has remained unfazed throughout A$AP’s career is his pen game. It continues to be stronger than ever, which brings quite a bit of joy to my heart. His tales inspired by sex, Harlem and imitators never gets stale, to me, and I think it’s because his cooler than a cooler demeanor never allows it to. This is the best of the album.

Tagged as: Album Review, The Front