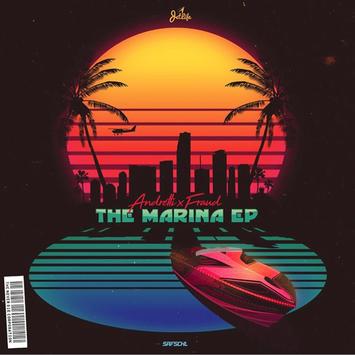 When I tell you that Curren$y has more projects than the city of Detroit, I’m telling you the GOD’s honest truth. This man is constantly working, often giving us the real through some pretty mellow bars and unorthodox flows. In his newest work of art, the infamous stoner links up with the semi-legendary hit-maker, Harry Fraud, for this nine track project that boasts some pretty good features, and based off the titles of the songs, interesting music, too.

“Scarab 38” is one interesting song. The production behind it is pretty smooth, reminiscent of some old school Marvin Gaye s**t. Action Bronson’s verse, the first out of two on this song, is pretty outlandish, as he blurts out random ass s**t like counting stars and seeing Puerto Rican Zebras in his imaginary sea world. As for Curren$y, he comes pretty hard on his verse, grabbing a strangle hold of the beat with some confident bars that revolve around nothing but his fortunes. When you combine all three styles together, you get this track that literally has three drastically different sounds attached to it.

“14 Packs” is short but sweet. First and foremost, the instrumental gives off this riveting sound, boasting heavy-hitting drumming and some fine organ play throughout. From there, Curren$y hops onto the track, and as expected, he approaches it somewhat offbeat yet at the same time relentlessly.

In my humbling opinion, Smoke DZA’s verse is the best thing about this song. On it, he mixes gritty bars with this sly ass flow that slips it’s way through the beat like it was coated with butter. To me, it just felt like a real ass verse from the talented Californian, and you know me, I’m always drawn to realness.

The production on “Radar Tower” sounds like a mix between a bad western movie and a dope ass trap beat.

When Curren$y is rapping like the way he’s rapping on this song, he’s one of the top 30 in the game. Not only does he stay on beat throughout his verses, but he also has this level of aggressiveness to his approach that makes the instrumental truly come alive. Aside from that, I love how he comes across like a boss n***a that is putting us onto game when it comes to stacking up.

“The Visitor” is as tough as a song is going to get. Powered by this dramatic instrumental that sorta reminds me of the theme song to New York Undercover, Curren$y spits like his life depends on it, finishing his bars flawlessly and showcasing some really good wordplay. Additionally, the motivational raps he drops on his verses are nothing less than inspiring, as he does his best to explain to the world that the only route to success is through yourself.

I’m ecstatic that Wiz Khalifa and Curren$y continue to have a musical relationship. The whole cast of Roseanne can learn a thing or two from the duo.

The chemistry between my two favorite stoners is alive and well! In “The Count,” the duo gets a chance to trade verses, each imposing their own unique styles over this soulful instrumental. Despite the fact that the beat has these vibes that are catered for a weed smoker to get high to, both rappers were able to also mix some grown-up bars into the equation to show their maturation when it comes to how they move in their personal lives these days. Don’t get me wrong, they still talk about rolling up on each of their verses, it’s just done in a more debonair way this time around.

I’ll be the first to admit to you that I’m not the biggest fan of Curren$y’s music. Maybe I have to be a stoner to truly enjoy it, but since hearing him emerge onto the scene in 2005, I simply haven’t understood his style. With this new “Marina EP” with Harry Fraud, I can honestly say that for one of the first times ever, I felt a good chunk of the contributions Curren$y put together on a project. Even though our hero had a few ho-hum tracks on this project, majority of them were exciting and quite riveting. I also felt like Curren$y rapped with quite a bit of energy throughout the EP, indulging in the newfound boss-like duties and responsibilities that come with being in the game for over ten years. Overall, our guy Spitta was definitely solid on this EP.

Nowadays, producers deserve just as much credit as the artist they work with, which is one of the many reasons you see projects featuring the producers names in the title as of late. In “Marina EP,” Harry Fraud definitely proves his worth to the listeners, delivering nine fantastic instrumentals that do a great job of blending subtle hip hop elements with deeply rooted soulfulness. What I love most is that the production on the project feels interconnected, with each song sounding like a continuation of the other. In my opinion, it’s what makes the project a keeper, and is also the reason that “Marina EP” feels different from the other 93 projects Curren$y has released in the last two years.

This album was that gritty summertime gem that I was expecting to hear the moment I pressed play on it. The vibes it give off are a good mix between soothing and assertive, and the lyrical contributions that everyone involved in the project were able to lay down were pretty solid. All in all, if you’re in the mood for some smooth rap s**t to hold you over for the time being, this project is perfect for you.