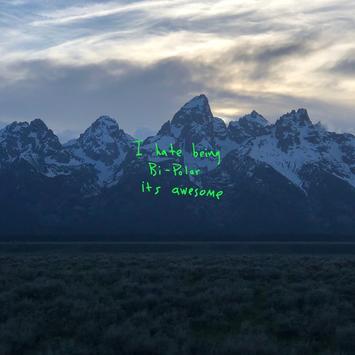 I feel like having something bad to say about Kanye West is the new black, and rightfully so, because he does and says a lot of questionable s**t whenever he’s around either a keyboard or microphone. But one thing I refuse to do is ignore the fact that he belongs in the conversation when it comes to being one of the greatest hip hop musicians of all time. In my opinion, Kanye’s ears for music is astonishing! When he’s wearing his producer hat, he is able to piece together sounds from different eras, genres and wavelengths so masterfully that you’re often reminded that music is a form of art whenever you hear a song he produced. When he’s wearing his rapper hat, he is able to generate so much interest in every word that he spews, taking full advantage of the term ‘free speech’ whenever he hops on the mic. With all the s**t going on in his personal life — the beefs, the inevitable f**kery that comes with being involved with a Kardashian, the erratic tweets, etc., we tend to forget that Kanye has a winning record when it comes to this music s**t, and with this brand new album called “Ye,” he looks to continue his dominance in the genre despite what we all think of him.

Kanye is thirstier than a “Naked and Afraid” contestant on this song.

Ty’s part is shorter than Earl Boykins, but his sanity is well-needed for the track.

“Wouldn’t Leave” is all about rising above negativity; hell, it starts off with some off-kilter singing by Young Thug, so it already had to overcome negativity in the first couple of seconds.

Kanye is pretty brash throughout this album, but on this particular song, he’s that gentle version of himself that wouldn’t send a negative tweet to a fly. With the song giving off this soulful feel thanks to a gentle hook and some heavenly harmonizing by Ty Dolla $ign and Jeremih, Kanye is encouraged to show some vulnerability, and he does, touching on topics such as the aftermath that occurred after his twitter scandal, his brand new mindset towards the people around him, and the loyalty his wifey showed him throughout all his recent drama. Even though he doesn’t quite sound sympathetic for his actions on this song, you do feel this urge to forgive him for at least one of the many foolish things he did/said in the past couple of weeks.

“Yikes” is this album’s version of “Famous.” it has the same high powered energy, and Ye’s insistence on being messy is pretty evident. What is a bit different about this go round is that Kanye does a bit of singing on the hook, delivering something that sorta plays the polar opposite to his aggressive verses. I always thought Kanye’s
ability to sing was a bit underrated, so I’m fine with him adding this element to the song.

I spent a lot of time talking about the singing Kanye does on this track, but it would be negligent of me if I didn’t also mention his fiery raps, too! Kanye throws nothing but lyrical haymakers on his verses, showing absolutely no fear in touching on topics such as the #METOO movement, his unstable mindset, and the mass media’s opinion on him.

Anytime Kanye makes you want to punch him in the face, he’s on his ‘A’ game.

Ya’ll said you wanted that old Ye back, right? Well the old Ye made his triumphant return on “No Mistakes!”

“No Mistakes” features some soulful vocals by Charlie Wilson, some old school samples from Slick Rick, and some soothing R&B elements production-wise. On his verses, Kanye talks about some lessons he learned from the past, letting the world know that he refuses to be bullied by the middle class or light skin people anymore.

“No Mistakes” is too short! Kanye, give us at least three minutes of this musical therapy, please!

I talk so much about how good Kanye’s ear for music is, and on this song, that talented ear is on full display! On it, our hero plays music connoisseur, outstanding producer, a great recruiter, and a pretty damn good singer.  I’ll break down all four roles he played below.

Music Connoisseur/Outstanding Producer: In order to successfully merge all the sounds you hear on this song together, you need to have a level of appreciation for music that is top level. You had to have studied hip hop, R&B, soul and rock-n-roll, broke it down to a decimal, than tried to mix certain pieces of each genre together to accomplish the sound I heard production-wise. It’s truly something special.

Great Recruiter: Once you have the production down pat, it’s time to find the right people to plug in to the equation. In my opinion, you can’t just throw Future onto a song like this and hope it fits, you need a couple of artists that are versatile, capable of successfully crossing genres, and has a bit of edginess to them (Cause the production does have some edginess, too); that literally defines 007 and Kid Cudi’s artistry. Kanye did a great job of picking the right artists to feature here.

Singing: I said it before and I’ll say it again: Kanye is a great singer. When he lays down a note or two, he knows how to make you feel his words, and I think this is because he is so good at developing a melody.

This song sorta gave me the chills, guys.

You know what’s interesting about Kanye and all of his albums? It seems like every one of them has its own unique persona. This particular album felt like we got ‘free-willed’ Kanye: a dude that is reflecting on some of the bad decisions he made in life, and doesn’t quite want to deviate from it. Throughout this project, whenever he rapped, it seemed like he wanted to prove to the world that he still had mic skills, but also justify why he thinks the way he thinks. At times it hampers the mood of the project, and in others, it makes it feel like you’re listening to a kick-ass confessional from a troubled musical artist.

My favorite aspect when it comes to Kanye’s music is the production, but quite honestly, this aspect was simply alright on this album. It contained a bunch of samples, some soulfulness, some grit here and there, but never really blew me away when it came to creativity (Besides “Ghost Town”). With that being said, I think this album was all about Ye’s lyrical content, so I’m not going to focus as much on the production.

There was some pretty big features on this project, and half of them were forgettable. For instance, Ty Dolla $ign is on track number five, and I swear to you, if you went to the bathroom to get a Q-tip,- you would’ve missed his part. Kid Cudi, Charlie Wilson and Lorde all had more defined roles, but was still overshadowed by the brashness of Ye. Honestly, I hope these guys didn’t all make the trip to Wyoming to appear on the album for at-best minuscule contributions.

So was this album made for us or Kanye?  He gets a chance to do so much venting on it, which makes it feel like you’re listening to one of his psychiatric sessions and you’re playing the psychiatrist. initially, I didn’t like that this was the route that he decided to take, but the more and more I listened to the songs, the more and more i appreciated the approach he took for its realness. Now that you got that out of your system, Ye, we need you to lock in on something more dynamic.