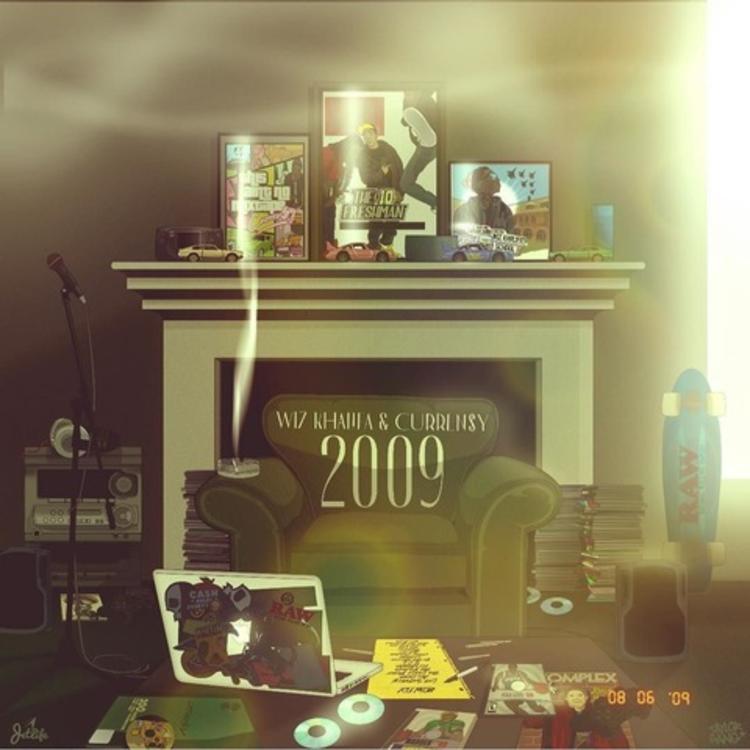 So what does the year 2009 represent for Wiz Khalifa and Curren$y? It was a time both rappers were on top of the game, as together, they were able to usher in a brand of hip-hop music that was loose, relaxing and catered to the stoners of the world. Today, listeners get a chance to relive some of their high moments (pun intended), as the dynamic duo decided to link up once more for “2009.”

“Getting Loose” isn’t the greatest song to listen to, but I do f**k with its energy.

Much like Problem and Wiz’s previous collaborations, “Getting Loose” features a great tempo and lots of club vibes. Despite all of this, Curren$y almost ruins the song with a mundane ass first verse, before Wiz picks things back up on his verse with some gritty/boisterous bars. Thank GOD for Wiz and the beat here. They definitely saved the day.

So many lessons get learned on “Find A Way.”

Over an instrumental your grandfather would probably f**k with, both Wiz and Spitta give listeners game on how to ball effectively, hustle smartly and provide for fam. I love the boss-like demeanor our guys show us throughout the song, as they never stress a single bar or trip that they are being gassed up without a hook backing them.

Lyrically, I think you get the toughest version of both rap acts on this song.

“10 Piece” falls directly in line with what Wiz and Curren$y were giving us back in the day. The song is powered by this heavy-hitting yet smooth instrumental, and over it, both Wiz and Spitta discuss how much smoking, stroking, hustling and flossing they are doing these days. Personally, I love how both rappers remind the world about their resumes on their respective verses, giving generation Z a bunch of role models to follow.

This is one of the few songs in which both Curren$y and Wiz ride the beat they were presented with fantastically.

“Benz Boys” features this cold ass instrumental that sounds like it’s ready to stick n***as up at a gas station. Over it, you get a simple/raw ass hook by Ty Dolla $ign that i hope he didn’t get paid for (He put in about five minutes of work laying it down). From there, Wiz and Curren$y trade verses, each talking about bossing up, showing off their luxurious items and keeping it real 24/7 (Their subject matters sound like Deja Vu, right?). What I love most about the song is that you get three completely different styles of artistry on it, which legitimately makes it feel like some authentic gang s**t.

“No Clout Chasin” is one of two opportunities this album has for a commercial hit (“Getting Loose” is the other). The song features a lively instrumental, phenomenal hook by Wiz, and vibes you need for a party to get started. Aside from that, Curren$y and Wiz deliver some pretty humble lyrics on their respective verses, as they each bask in all the great decisions they’ve made in their life up to this point.

I have a few critical takeaways about this album that I need to get off my chest immediately:

OK, now that I got all of that beef out of my system, I’m ready to highlight the good.

“2009” features some serious wisdom from players in the game that have seen it all. Literally from start to finish, both Wiz and Curren$y accept their roles as consultants, schooling us on keeping s**t real at all times. For this reason alone, listeners will be able to overlook times in which they come across as dull (Curren$y), corny (Wiz) or predictable (Wiz). I think the number one goal for this album was to motivate the rappers that are currently in the shoes Wiz and Curren$y were in back in 2009. It’s almost like both rappers are letting the world know that they didn’t have any examples to rely on, instead, they had to figure s**t out all by their lonesome.

In my opinion, the beats on this album were simply alright. I f**ked with “10 Piece,” “Benz Boys,” “No Clout Chasin” and “Stoned Gentlemen,” but absolutely hated “Garage Talk” and “From The Start.” As a whole, I thought too many of the beats sounded like carbon copies of their old s**t, which frfr, should make you start to question how much credit needs to be given to I.D. Labs, Sledgren and Johnny Juliano for the success of both of these guys. Also, I felt like the inconsistency in beat-selections made the album flow weirdly. For a stoner-inspired album, that s**t has to flow well.

At this point, I am aware when Wiz and/or Curren$y has made a good project, and in my opinion, this isn’t one of the cases. I need to feel their s**t, and for reasons such as lack of chemistry, underwhelming production and blahzay-blahzay raps, I simply didn’t. Welp, time to go back to their actual 2009 s**t.