2 Chainz – Rap Or Go To The League (Album Review) 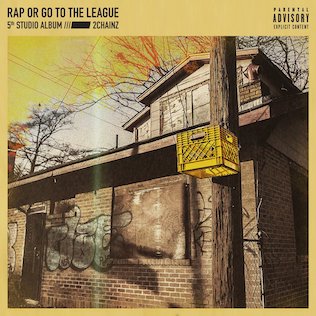 Let’s be real: Did you see 2 Chainz outlasting Ludacris in the rap game? If you said yes, you are a damn lie! When Chainz first emerged onto the scene with Playaz Circle, it felt like he was going to be one of those affiliates that ended up in Luda’s purgatory. Fortunately, through hard work, the Atlanta native has carved himself  out quite the career. On “Rap Or Go To The League,” Chainz gets to elaborate on what the odds looked like for him when he first thought about balling/rapping, and what you get to hear is beyond fascinating music.

“I Said Me” is supposed to be an album-filler, but I think it holds its own as a standout track on “Rap Or Go To The League.” On it, 2 Chainz tries his hardest to convince the world he’s always been this tough ass figure that has stayed true to the street codes through some rugged bars. On some real s**t, there is no way in hell you won’t believe a single testament he delivers.

Everything about “I Said Me” sounds riveting: The compelling instrumental, Chainz’s gritty delivery of his bars, and most importantly, his pressing lyrical content.

If you aren’t aware of what 2 Chainz is all about, this song is a great place to start figuring out.

Much like “Burglar Bars” from “Pretty Girls Like Trap Music,” 2 Chainz keeps it all the way real on “Forgiven,” spitting bars about his dreams to live lavishly, make it in the league and provide for his homies struggling in the trap. What I love about the song is that the former DTP rapper leaves his goofy punchlines and wacky flows by the wayside, instead gifting us with bars that are meaningful and slowly laid out. When you add featured guest Marsha Ambrosius to the mix, you’ll realize this track is arguably one of the best on the album.

Chainz’s soliloquy at the end literally gave me the chills. He’s right, n***as need to start making better decisions in the hood.

“Girls Best Friend” is the epitome of a commercial hit. On it, 2 Chainz and Ty Dolla $ign spit game with the best of them, doing everything they can to woo some bad chicks into their respective lairs. Production-wise, the song has this slight old school feel to it, while both Ty and Chainz give us a mixture of elementary raps, lethargic crooning and tedious lyrical content on their contributions.

Though this song is simple ass s**t, I find it highly enjoyable!

“2 Dollar Bill” is a bit corny (Especially on the hook), but I think it’s trendy/catchy enough to catch listeners attention. On it, 2 Chainz, Lil Wayne and E-40 each drop verses that describe the many different ways they’re rarer than a two dollar bill over this old school west coast beat. What I enjoy most about the track is that you get three completely different styles of rapping on it, and each of those styles are goofier than a muthaf**ka!

Clubs will soak this song up by COB tomorrow.

“Rule The World” is flawless! First and foremost, the song is powered by this brand new version of Amerie’s “Why Don’t We Fall In Love” instrumental that I think listeners will absolutely love (Kudos to Hitmaka)! Over this instrumental, featured guest Ariana Grande was able to lay down a powerful hook about waiting for her man to come home so together they can take over the world. As expected, her vocal performance is top notch.

With 2 Chainz having a great backing from both the instrumental and hook to this song, he absolutely shines, gifting us with slick ass bars about needing his chick for sexual favors, loyalty and protection. Personally, I enjoy how he keeps s**t light-hearted on his verses, ignoring the song’s sacred vibes.

If I ruled the world, I would make two Thanksgiving days.

WHAT I LOVED ABOUT RAP OR GO TO THE LEAGUE

WHAT I HATED ABOUT RAP OR GO TO THE LEAGUE

2 Chainz (AKA Tity Boi) has definitely come a long way. When he first started to establish himself as a solo artist, he got rave reviews for his comical style of rapping on commercial records. Now he’s elevated to OG status, schooling the youth on important s**t and making timeless-sounding music. In “Rap Or Go To The League,” I literally listened to every single ounce of knowledge he spewed out, even when it was delivered using wacky deliveries. With that being said, I am proud of what he’s become, and wonder how successful he could’ve been if he continued to hone his skills on the basketball court like he did with his rap career…