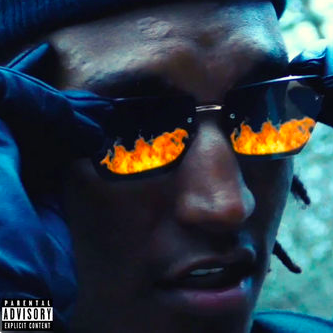 On “Whatisreal,” ChrisDaCEO gets on his lyrical s**t, putting to bed haters, indulging in promiscuous women and making serious cash all over Lil Yachty’s “SaintLaurentYSL” beat. While I love how Bellicose Chris raps on the track, I think it’s the bop he spits with that impresses me the most.

I f**k with the swag Chris shows on this track.

“Asken Why” is a dark banger that I think is impossible to dislike if you’re into some gangsta s**t. It is powered by a cold ass instrumental that has plenty of trap vibes attached to it, and over this instrumental, ChrisDaCEO sings soulfully on the hook, while dropping violent bars on his verses. On the real, I can see myself bumping this joint when it’s time to do some mobbin’.

Play this song if you want to test how strong your car speakers are.

ChrisDaCEO is known for rapping over some of the hottest beats in hip-hop today, instilling his own unique flair into them. In “Alot,” he decided to rap over one of the hottest beats out in “Alot” by 21 Savage and J. Cole, dishing out introspective, personal and profound lyrics. Personally, I’m feeling the track a lot (ironically), so much so that I think he has his best rap performance on this album on it.

“Money Addiction” is a mean ass banger! First and foremost, the track is powered by this bass boomin’ instrumental that literally shakes walls when played loudly on some serious speakers. Over this instrumental, Chris lets the world know what his priorities are, and they revolve around making money moves, dismissing h*es and s**tting on the weak. Personally, I enjoy the melodic, yet aggressive nature Chris raps with on this song, as he makes sure to put everyone that needs to be put in their place in their place.

“Friends” is tough as f**k! While I love the sinister instrumental that powers it, I think it’s the real ass subject-matter ChrisDaCEO raps about on the track that catches my attention the most.

When you are boss like ChrisDaCEO, it can be hard to trust anyone around you — even friends. In “Friends,” Chris touches on this difficult predicament, coming out unscathed. Not only does he and his featured guest hurl out ferocious bars about being solid in every type of way, but there’s this level of trillness in both of their verses that compliments their carefree lyrics masterfully. All in all, I’m f**king with this joint a lot!

The Ratings Game is very fond of ChrisDaCEO. In the last two years, he’s dropped a few projects that we’ve rated favorably. Each step of the way, I’ve noticed improvement in his music-making skills, with “Legacy III” featuring his best work.

“Legacy III” is pretty explosive. From the moment you press play on it, you are greeted to bangers that are cold, gritty and electrifying. On ChrisdaCEO’s contributions on the album, he talks his s**t, making sure we understand his opinion on everything from shady h*es to making money with the best of them. What I like most about Chris’ approach to this album is that it is extremely versatile, as he picks his spots when it comes to being melodic, rapping tough or a combination of both.

If you are a fan of a solid mixtape that features some strong hip-hop music, I think you should give “Legacy III” a shot.