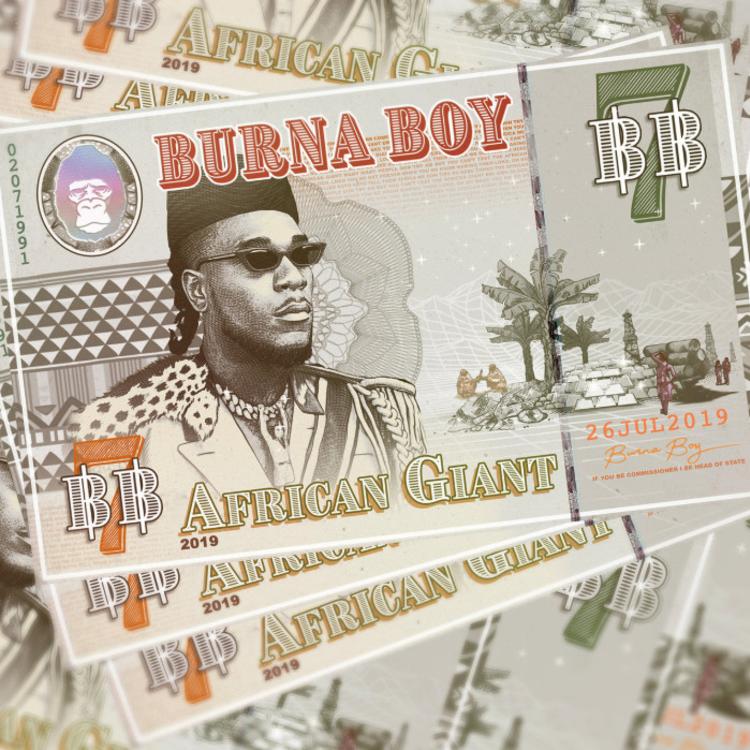 Nigeria’s very own, Burna Boy, attempts to take the world by storm with the highly-anticipated “African Giant.”

“Omo” is one of those tracks that straddles the line between afro-pop and reggae. With it being powered by this commercialized Caribbean instrumental, Burna Boy sings passionately, but gloats cockily, as he does his best to woo this bad chick back to his crib. In my opinion, what makes the song is special is its playa vibes — a style of vibes I can no longer relate to.

I think this song is too trill, catchy, infectious and appealing to pass up.

“Pull Up” is a smooth hit that has plenty of afro-fusion vibes, sensual feels, and fearless singing from a dude that sounds like he could pass for a middle lineman. Personally, I f**k with the song a lot, especially when it comes to its unapologetic approach to caressing bad chicks.

Don’t let the sweetness of this song fool you, Burna Boy can kick your ass.

I shook my ass from start to finish listening to this song.

Burna Boy is the closest thing to a young Nigerian artist with an old school soul. When he makes music, I hear flashes of the afro-pop sound you hear today, but also this classic afro-jazz sound that the Fela Kuti’s of the world made famous. In “Dangote,” he blends both worlds together once again, creating this fantastic tune that features smooth vibes and nothing but infectious melodies.

I just love how commanding/forceful Burna Boy is on this song, despite the fact that he has a pretty smooth instrumental backing him up. On the real, that is the definition of composure, to me.

As a proud Nigerian, “Another Story” hit a chord with me. The song starts off with a bogus history lesson on how Nigeria came about, followed by some smart brother denouncing that story. From there, the song turns into a beautiful gem in which Burna Boy and M.anifest sing and rap proudly about repping the true version of theirs and my home country. What I love is that the track is fun and spirited, while also very deep.

Back when I would go to African parties almost every week, songs like “Anybody” would play loudly. On it, what you get are festive vibes, a splash of haziness and confidently crooning by Burna Boy in which he comes across as the king of his jungle. Additionally, the rhythm of the song is catered for sophisticated ass-shaking, so I wouldn’t be surprised if I heard an abundance of individuals requesting for it to be played at their traditional wedding.

Burna Boy has been dominating Afro-fusion for some time now. In “African Giant,” I thought he ended any argument that he wasn’t, as he was able to drop something so undeniably smooth, organic and sly, you won’t believe it’s not butter.

You know what makes Burna Boy so special, to me? When he makes music, it feels like he’s in his own little world. I hear slight influences from Fela and other artists such as WizKid in his music, but it’s so slight, I wouldn’t even call it a big deal. Aside from that, I love his burly voice, and how he uses that voice to woo his women, stand tall, represent his country, and of course, brag his ass off (What Nigerian doesn’t have a splash of cockiness in them?). Lastly, I believe Burna Boy’s melodies are so contagious/transferable, he can make an akata want to invest money in his artistry.

Personally, I could’ve done without the features on this “African Giant.” Don’t get me wrong, Damian Marley shined, M.anifest shined, I thought Future helped bring out a competitive Burna Boy, and YG was OK (If you took him off of “This Side,” it might’ve ended up one of my favorite songs on this project), but I didn’t need any of them to enjoy this album. What this tells me is that Burna Boy is such a dynamic artist, he can keep a listeners interest all by his lonesome (That’s very hard to do).

There were a few watered down songs on this album. I thought “Gum Body” was cheesy, “Show & Tell” was too hip-hopish for Burna (Even though he absolutely murdered his rap verse on the track), and “Destiny” was simply corny. With that being said, these songs were still better than anything Lil Pump or Quavo dropped in their lives (Lil Pump is so easy to pick on, right?).

Obviously the instrumentals on this project were flawless. Majority of them featured smooth vibes, afro-roots and plenty of energy. To me, it felt like the beats were alive, as I pictured them with heartbeats and healthy lungs. Anytime instrumentals make you think like that, they must be special (Shout-out Kel P and Kelp Amba).

Burna Boy may or may not be the best Naija musician out right now, but in my humbling opinion, he’s the most grandiose/powerful/grand one. When he speaks, he demands attention — an aspect I absolutely love about his artistry.