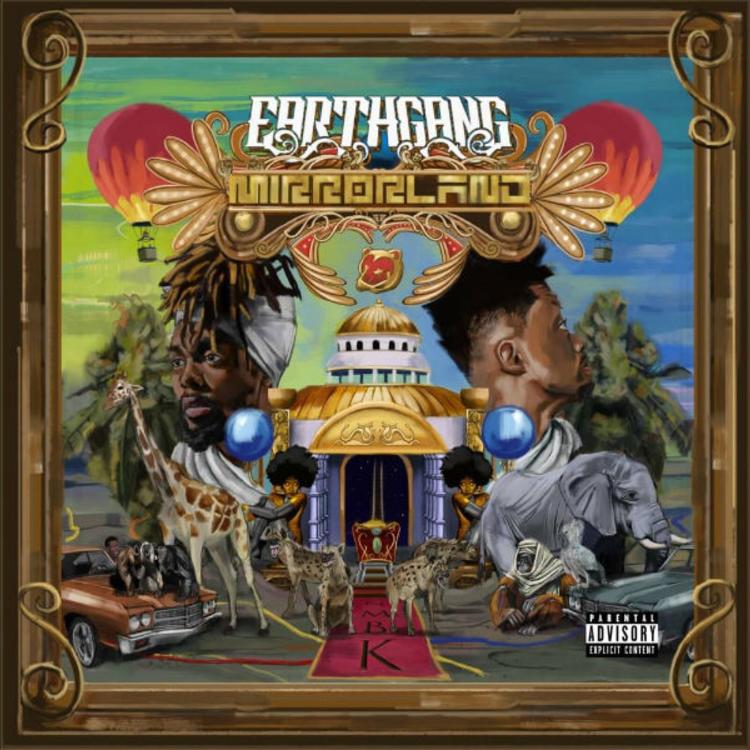 EarthGang puts on a circus-like hip-hop show in “Mirrorland.”

I love “Tequila!” I love the drink, I love Tila Tequila, I love this song!

“Tequila” is way too real to pass up on. Instrumental-wise, what you get on the song is something that is both jazzy and hard-hitting. Over this instrumental, EarthGang and featured guest T-Pain talk about dealing with exes, self-identity issues, and bottles of tequila that are friendlier than Ned Flanders.

T-Pain has fallen in love with a stripper, a bartender, and now a bottle of Tequila… Is this n***a missing that one Y chromosome that’s needed for a human-being to love properly?

It’s impossible to not at least respect “Swivel.” On it, EarthGang blesses us with something that is trill, tough, painfully honest, and old-school-sounding. Throughout listening to the track, I bopped my head violently, but also internalized the duos deep thoughts of paranoia and self-improvement.

“Bank” is an absolute club banger! Matter of fact, it sounds like a Migos song that is being played on a Talkboy.

Anyone else get super excited once you heard “MMM Cap productions?” Holy s**t, I haven’t heard from that n***a since Shawty Lo’s “Foolish” track! Anyway, MMM cap productions (aka DJ Montay) blesses EarthGang with this screechy trap instrumental for “Bank” that forces the duo to show off their trill side for a good amount of the song. Not only do they hit us with bars full of threats, but they also spit with cooler than cucumber deliveries and flows. No need to worry, they have their weird ass moments on this song, too (There’s moments in this song in which the duo sounds like ghetto Darth Vaders, constipated pimps and children with strep throats), but fortunately, it isn’t the key parts of this song.

“Proud Of You” features a bunch of n***as that forgot to take their ADHD medicine this morning.

On some real s**t, if Young Thug ever decided to join EarthGang, he would fit in nicely. With that being said, in “Proud Of You,” a duet with Thugger and EarthGang, the trio shines by being their wacky ass selves, blessing us with this unorthodox/feel-good banger that features heartwarming/braggadocios lyrics, GOD-Awful singing (Actually, in the very beginning of the song, the singing was solid), and some of the most bi-polar contributions I’ve ever heard in my life.

N***as was probably sippin’ on all kinds of deadly concoctions before they made this song.

“Top Down” is rebellious, youthful, fun to sing-along to, and both vintage and modern-sounding. While I enjoy the myriad of vibrant vocal contributions you hear on the song throughout, I do admire EarthGang’s verses on this joint a bit more, as they perfectly exhibit the minds of unforgiving figures that can care less what their parents, naysayers, and state troopers think of them (Ain’t no half-steppin’ when it comes to being a rebel).

Ironically, I believe EarthGang makes out-of-this worldly music. In “Mirrorland,” they shatter eardrums with their singing, rap with the craziest of styles, and chastise instrumentals like they were squirrels in a backyard. In other words, they are a rebellious tandem that I believe has a voodoo doll of the box you want to put them in.

Do you know what my biggest takeaway from “Mirrorland” was? The impressive bars both members of EarthGang were able to deliver on the album. Personally, I love how the duo mixed wisdom-filled bars with both comical and gangsta-inspired bars throughout, coming across as individuals that have no fear in being role models or taking on the best hip-hop has to offer. To get even more specific, I loved EarthGang’s animation, their effortless punchlines, wacky flows and confidence when they rapped on this album.

Even though I praised the rapping on “Mirrorland” a paragraph ago, what truly makes the album special, to me, is the unpredictable moments you get from EarthGang throughout it. On some songs, you might hear n***as trying to sing with all of their might, while on other songs, I swear that the duo is just f**king around with us. Whatever the case may be, I love unexpected s**t when it comes to music, and trust me, you should expect so much unexpected s**t on this album.

The beats were really good on this album, but it’s not like you noticed them. Each and every one of them was filled with something unique (Jazziness, alternative elements, trap vibes, etc), but none were able to overshadow the outlandishness of either member of EarthGang. Matter of fact, I would be very interested in hearing just the instrumentals on this album one day.

The features were really good on this album, but it’s not like you noticed them (Hold up, is this deja vu?)… Each and every guest artist brought a different twist to the song they were featured on (Except Thugger, he sounded just like them EarthGang n***as in “Proud Of U”), as they did their best to bring something normal to an otherwise wahala environment.

EarthGang are a mix between Outkast, B.o.B., Young Thug and Danny Brown, to me. They are southern-styled wise like the former (Everyone knows Southern people are a different type of wise), very experimental like the second guy I listed, cartoonish like the third guy I mentioned, and polished lyrically, yet extremely goofy like the last guy I mentioned. In “Mirrorland,” the first project I cared about by EarthGang, I thought they put all the different traits they do well together, creating a body of work that not only symbolizes who they are as people, but also challenges listeners to look past delivery when it comes to crowning who we think are the best MCs in the game.