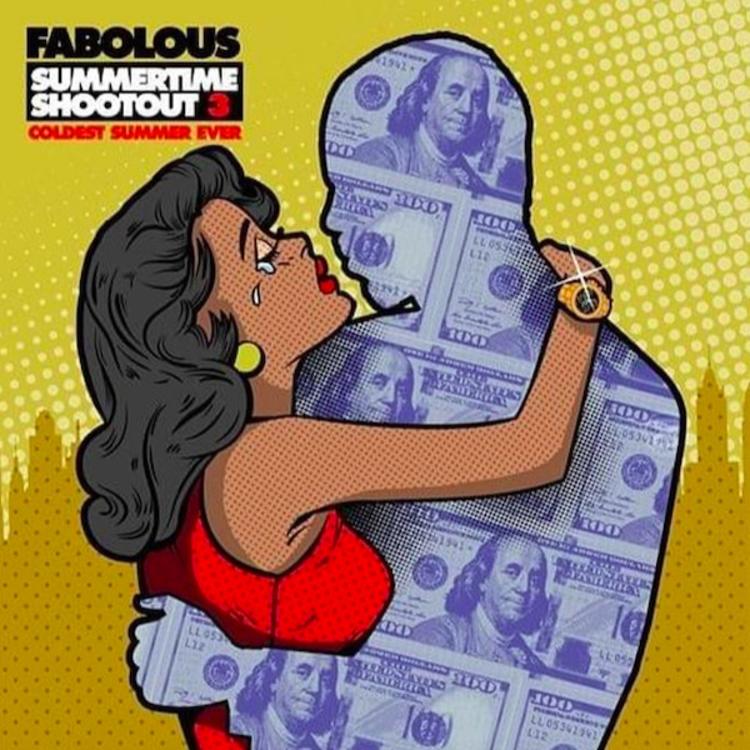 Fabolous puts up a vintage rap performance in “Summertime Shootout 3?”

If you grew up in the 90s, the instrumental to “B.O.M.B.S.” should give you the chills, as it samples the Chicago Bulls’ entrance music during the Michael Jordan days. Fittingly, Fabolous plays raps version of MJ on the track, hurling out nothing but punchline-heavy bars about balling, f**king with real ass chicks, and destroying competition.

For those of you that are amazed at Fabolous’ clever basketball punchlines, remember, his rap moniker used to be ‘Fabolous Sport.’

4. TALK TO ME NICELY

“Talk To Me Nicely” is one of those tracks that rely on infectious melodies, a sacred trap instrumental, and reckless bars to succeed.

Just like you, I prefer Fabolous and Meek Mill to rap without singing; however, I enjoy how they come across as savage, bossy, and gritty in “Talk To Me Nicely.”

When older rappers sing, something about it sounds off, to me…

3. GONE FOR THE SUMMER

“Gone For The Summer” is trill as f**k! On it, featured guest A Boogie Wit Da Hoodie gifts us with a melodic hook that has him talking about both his lavish life of living and street-certified ways. As for Fabolous, he spits nothing but aggressive bars about staying true to himself and putting his naysayers to shame in his verses. While you’ll love Fab’s gritty lyrical content on the track, it’s his clever punchlines that will catch your attention the most (So many of them went over my f**king head).

Fabolous and Lil Durk slay “Cap!” First and foremost, Durk does a great job of hyping n***as up on the track by gifting us with an exhilarating hook that encourages dread swinging and rowdiness. From there, I love how Fab and Durk go ham on their respective verses, letting listeners know that they are savages when it comes to confronting opps, serious when it comes to making business moves, and remorseless when it comes to f**king with thirsty chicks. While Durk kills his contributions by relying heavily on his energy, Fabolous kills s**t by slyly hurling out clever bars in his raps.

Let’s not forget, some of Fabolous’ best songs are on some R&B s**t. Well, “My Mind” is on some R&B s**t, and as expected, the track is one of the best on “Summertime Shootout 3.”

“My Mind” is powered by this old school R&B instrumental that flips Case’s “I’m Missing You” instrumental from back in the day (I feel like that instrumental gets flipped a lot). Over this instrumental, both Jacquees and Fabolous do their thing; with the former gifting us with a silky smooth hook that is designed to get ladies out of their skinny jeans, and the latter blessing us with raw ass verses that are designed to get ladies out of their skinny jeans, underwear, and any other remaining garments. When it’s all said and done, the mixture of both serene singing and raw rapping makes for quite the bedroom track.

For some odd reason, Fabolous’ name never gets brought up when it comes to the best rappers in the game. Honestly, I believe he can go bar for bar with anyone of your favorite rappers. Anywho, in “Summertime Shootout 3,” the Brooklyn rapper’s punchlines are top-notch, his lyrics are genius, his flows are outstanding, and the urgency in his voice is prevalent. Does he strike out on a few songs trying to play a singer? Yes, but at the end of the day, everyone is singing nowadays, so why not give it a stab from time to time, right?

I loved the topics that were covered in “Summertime Shootout 3.” To me, Fabolous sounded like an elder on the album, as he talked about certain things like bossing up, parenting, embracing challenges, mentoring, and demanding respect from anyone and everyone. All in all, I feel like Fab shows how much he’s grown as a person on the album, while still maintaining a competitive nature in the process.

The beats on “Summertime Shootout 3” are excellent! Some are hard-hitting and ferocious, while others are laid back and soulful. When you mix all the different styles of beats you hear on this album together, what you get is a body-of-work that entertains at all times.

There are a lot of f**king features on “Summertime Shootout 3,” but most are meaningful. To me, every single r&b act on the album was needed, while the youthful rappers on the album helped Fab sound juiced-up and extra hungry. There were a few collaboration tracks that sounded like some ‘plug-a-rapper-in’ s**t (cough, cough “Choosy”), but those have already been deleted from my iTunes library.

At 41, Fabolous sounds as crisp/motivated as he’s ever sounded. While he is still hitting us with punchlines that are nothing less than dynamic, it’s his grown-up bars that take his raps to another level. With that being said, in “Summertime Shootout 3,” it feels like Fab is intent on reminding the world that 40 is the new 30. If 40 really is the new 30, we need to start appreciating these next ten years from him.