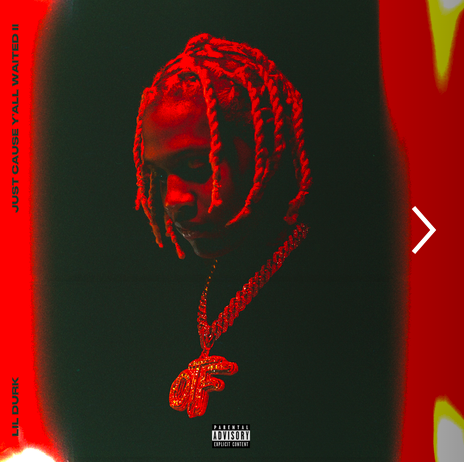 Lil Durk’s career has been pretty bizarre. He’s always had a buzz but hasn’t been able to reach the mountaintop of rap. Right when I feel like the 27-year-old is starting to get the recognition he deserves, he does something to get himself in some trouble (TMZ). With that being said, “Turn Myself In” feels like a goodbye of sorts from the rapper, as, in the song, he sings soulfully about wanting to make sure his kids, his girl, and his friends are good when he goes to jail.

While there are some songs that I think are better on Just Cause Ya’ll Waited 2, there aren’t many that are as important as “Turn Myself In.”

On “Viral Moment,” Durk proves to the world that he is an OG in the game by spitting knowledgable bars about hood loyalty and street codes.

While “Viral Moment” isn’t all that dynamic, it is way too trill to ignore. Though you get a version of Lil Durk that is melodic, throughout the song, he simply vents to us like someone who can care less about creating something catchy or infectious.

“Different Meaning” is a fantastic intro.

“Different Meaning” is the following things: Hood-emotional, infectious, catchy, and powerful. While the lyrical content you hear on the song is beyond intriguing, I think it is the spirited/soulful singing that you get from Durk that makes it special.

“3 Headed Goat” is mean! Not only does the song feature a chilling trap beat that just tried to pick a fight with my car’s speakers, but it also features an exhilarating hook by Lil Baby, a verse by Durk in which he raps slyly about pressing ops, and a competitive-ass verse by Polo G that has him bragging about both his money and violent ways. If you are a fan of gangsta-ass music, you will love “3 Headed Goat” like it was your son.

Polo G absolutely murdered his verse on this song.

“Street Affection” is the most riveting song I’ve heard this year.

“Street Affection” is powered by this piano-heavy beat that damn-there made me tear up. Over it, Durk calls out his fake friends, snitches, and opps. He also reminds the world that he is as solid as it gets when it comes to moving in the streets.

I love how Durk switches between passionate singer and gritty rapper on this song.

Lil Durk’s rise to the top has been slow but steady. Because of this, he has sounded like someone who has had a chip on his shoulder for the last couple of years. On Just Cause Ya’ll Waited 2, that chip Durk has on his shoulder forces him to dish out nothing but infectious street bangers.

I’ve said it before, and I’ll say it again: Lil Durk is one of the most influential rappers in the game today. Not only has several rappers jocked his melodic style, but he has also added authentic gangsta feels to the songs he has featured on. With that being said, on Just Cause Ya’ll Waited 2, Durk continues to straddle the line between melodic and trill, riveting and raw, and youthful and OG-like.

Here’s the thing: I f**k with both the vibes and the beats you hear on Just Cause Ya’ll Waited, but let’s keep it real, a lot of the songs on the album sound similar to one another. At the same time, I didn’t really f**k with the songs that sounded unique (i.e “Chiraq Demons”)… Man, Durk can’t win with me out here!

When Durk speaks, I listen. Though Just Cause Ya’ll Waited 2 features excellent melodies, hard-hitting beats, and solid features, what makes the album special is the believable/gritty-ass lyrics you get from Durk literally from start to finish.