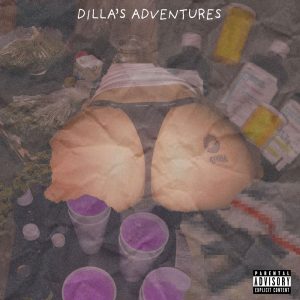 Dilla is such a trill rapper. In his music, not only does he like to keep it 99+1, but he also raps with a style that is beyond gritty. On Dilla’s Adventures, Dilla holds absolutely nothing back!

Dilla’s Adventures is short but sweet. On the album, you get a song in “Intoxicated (Intro)” that boasts chill vibes, a song in “No More” that is hella catchy, a song in “Crime Pays” that is beyond riveting, a song in “Cocaine & Percocets” that dope boys will love, a song in “The Ugly Truth” that you can ride out to, and a song in “Handsome” that is very hypnotizing.