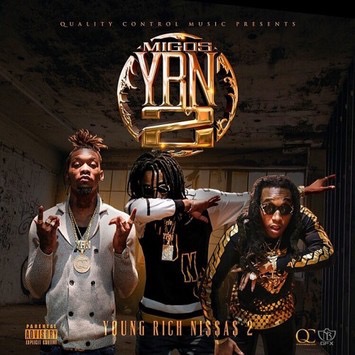 Like it or not, these goons get rotation! Several of their songs are represented in the club, and dare I say they are influential in this here rap game (85% of the songs you hear from rappers nowadays sound like them.) With this new Mixtape, I don’t expect to hear anything spectacular, but I do expect to hear more dabbin’ music (which I won’t mind listening to for say……..The next 4 days.).

The chorus is lovely on this song! Who doesn’t put their hoes on a mission though? I tell my hoes go get that green peppers from Giant food warehouse, a negro trying to cook some turkey spaghetti TRICK!

The song is radio friendly once they switch hoes for another word; let’s help em out here:

Put their “PROS” on a mission? That makes sense right? Maybe their hoes are pros, and you want to put your professionals on missions right?

Put their “TOES” on a mission? Well your toes are the ones doing the walking right? So technically they got the most missions…

Put their “FOES” on a mission? Nahhhhhhhh.

Here goes your certified club banger! The Energy on this track is phenomenal!

My chick is bad too ya’ll! Booty so big that I installed apple TV on it!

They’re still talking about creating dabbin’ on this song…. LET IT GO FELLAS!

I love the chorus, as it has this nice flow to it. I’ma sucka for choruses like this where they mix and match one word after another, It’s like one of those SAT questions!:

The song sounds retarded, but in a good way! It’s Tracy Morgan retarded as opposed to Brad Dassey from Making a Murder retarded.

Though their content isn’t the best, you can’t deny their flow on each verse on this song. One of them is definitely better than the other, I just don’t know who is who.

I like the beat, which is pretty surprising considering the fact that the beat was made by a dude named “Will-a-fool”. The pianos adds that unique element to the sound, while it still maintains its club worthy roots.

I love their flow on this track, as it matches the vibe of the beat. The content on their verses actually has substance too, as they talk about how they run the rap game and creating the dab. This is a big deal to them…….The creation of a DANCE…..It invokes fighting words between multiple artists….The creation of a DANCE! I rather Migos fight over a cake recipe than a damn dance.

Chances shows some humility from the group; I like that. They’re being honest about how they came from smelling like Funions (LMAO), to having a mansion now. That’s a serious come up! You can’t be smelling like funions man.

The beat is typical hip hop, but at the same time, it has some elements that add that passion and struggle to it. a non-Migos fan will like this song.

These dudes really are bitter about people stealing their dab, as they mention it on almost every song. This should tell you the type of lyrics you should expect from this Mixtape…. With that being said, what did you expect from these guys lyrically anyway? Once you accept the fact that they are who we thought they were (In my Dennis Green voice), you would find that this album is very consistent.

Overall, this Mixtape continues the groups momentum. It prepares you for something big in the near future, something.