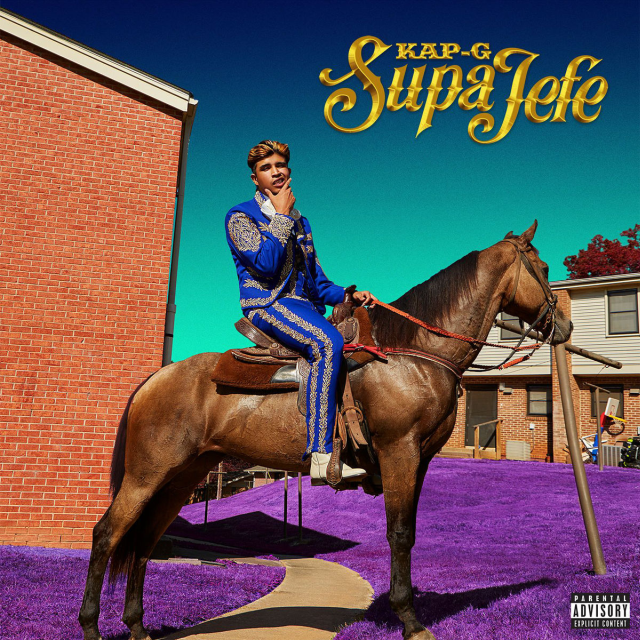 If this album is as interesting as its artwork, it might be an album for the ages.

Everyone likes Migos right? Well this is Migos in the form of a Mexican man! I mean seriously, Kap G does a good impression of Offset on this song from the ad-libs to the flow; f–k, he even picks a beat that I’m pretty sure Migos would pick.

It sounds like three people are on this song, but it doesn’t have any names as features though; Is this the first n—a to have ghost features?

Despite all the reppin and tough talk, the song has a partying sound to it. Kap G goes back and forth with both a singing Chris Brown and a rapping one, providing his huffing and puffing sound to the track. Overall, Kap does nothing for the song, as Chris Brown shines the brightest on a song that is pretty much catered for him.

‘Motions’ has a gentle sound to it, but Kap is kicking some ass on it lyrically.

One thing I really like about Kap is that he seems like a real ass dude, so when he makes records in which he opens up, it sounds really dope to me.

Kap closes his lines out like a professional bruh! This dude rhymes better than the great Dr. Seuss.

This song sounds like both ‘Moves’ and ‘Bounce Back’ by Big Sean: It has the same tempo, and the same vibe to it.

While ‘Basic’ has a very basic theme to it, Kap G does the song justice by creating this catchy ass melody throughout.

‘Rings’ is a smooth trap song by Kap G in which he combines some impressive harmonizing with a flawless flow. The song is put together very well, resulting in the most complete song on the album.

I like the fact that he compares some of the past NBA champions credentials to his scumbag antics; I’m sure Magic Johnson winning 5 championships is just as impressive as getting a Porsche through rap money.

My biggest beef with the artists of today is that they all seem to copy each others styles; while Kap G is one of those people that copies the sounds of today, he also adds some uniqueness to it that distinguishes himself from the pack just a little. You can tell dude has talent, but he needs to find his own lane and sway away from sounding like the music of today to reach his potential.

There is a few hits on this album, and you will certainly enjoy it for like 1 week til the next singing trap rapper comes out.