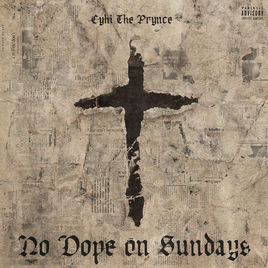 Let’s be real for a minute — Kanye and the great people at G.O.O.D. music hoarded CyHi’s s–t for years! For him to see all these other artists under the label release 2 – 3 albums before he even released his debut is atrocious to me! Here’s the silver lining though: For a gritty MC like CyHi, that boiling frustration probably translates to better music, which means his true fans might get something that would’ve been better than a premature release when he was first coming out. Does that soliloquy I just gave excite you for this debut album ‘No Dope On Sundays?’ if not, before Sunday, do more dope and read it again.

‘Trick Me’ is one of many squeaky sounding songs on this album. At this point, I’m convinced CyHi was inspired by Chip’ N Dale Rescue Rangers during the making of this project.

2 Chainz ain’t playing with n—as anymore! He comes with it on every verse he drops these days, making sure n—as know he’s one of the best lyricists in Atlanta. On this verse, the Hibachi king gives us something dynamic, switching flows like Cleveland Browns switch quarterbacks. It’s definitely some real n–a s–t from him overall.

Both ‘Capital H’s in the middle of their names’ collaborate on this song — and it is a doozy!

With passionate music dominating this album, ‘Movin’ Around’ comes across as that one song on the album that is a bit chill. On it, CyHi sings, he raps (squeakily), and talks about his drug dealing ways pretty effortlessly. I like his part for its club appeal, and even more for his infectious bars.

ScHoolboy Q is such a real one to me! He ain’t with all the flashy raps, instead, he tends to talk about mobbin’ whenever he gets the chance to. However, on this song Q sounds like he wants to start singing, but ultimately changes his mind when he sees his goon homey staring at him with the ‘f–k you doing?’ look.

I didn’t know that CyHi was capable of making a well rounded song like this.

3. NO DOPE ON SUNDAY

I never really associated dope with CyHi, but for Pusha, that is right up his alley.

‘No Dope On Sunday’ is powerful in every way, as CyHi gets a chance to rap over this holy instrumental that allows his lyrics to illuminate. As I stated earlier, I had no clue that CyHi was in the trenches with the wolves until now, so his wise words about the dope game is pretty surprising to me.

Pusha-T joins the song when the beat changes, and for the first time Pusha sounds a bit remorseful for his drug dealing ways. I never thought I would get a reflective verse from Pusha, but that is exactly what you get here.

This song has some blood, sweat and tears associated to it.

It’s so refreshing seeing these two brothers reconnect like this.

I knew a CyHi and Kanye collaboration would have a petty ass chorus like this! It’s still catchy though, as it has this bop to it that is extremely infectious.

On CyHi’s verse, he shows the world his wittiness once again, as he talks that s–t through some very impressive punchlines. The version of CyHi that you get on this song is the one I thought he was all along.

This is such a Kanye West type song, so I expected him to kill it like he does here. I love how arrogant he sounds, but I love how well he rides the beat even more! All in all, it is a very good verse by the don!

I hope this song gets the love that it deserves; that’s no longer a guarantee with Kanye features anymore.

It’s an intro, but CyHI is in middle song form on this song. With religion being a touchy subject, the G.O.O.D. music legend doesn’t tip toe at all on his verses, dropping tough ass bars that cover humility, confidence, and of course morality.

This is one of the best rap debuts in years to me! I can tell CyHi had lots of s–t bottled up for years now, and on this album it explodes in your face like a shaken up soda can.

Does CyHI do anything bad on this album? We all know he has amazing punchlines and that he can rap circles around anyone, but did anyone see his versatility in terms of harmonizing and creating a complete song coming? I feel like I learn so much from the ATL rapper on this project, which is something that I can’t quite say for most rap releases this year.

In all honesty, there isn’t one bad song on this album (Don’t believe me, look at the rating I gave each song up there). CyHi doesn’t only make good RAP music, but I think he makes good music in general….. You know what I can do with that comment? I can say CyHI might just be G.O.O.D. music! I mean seriously, his poetic words, street inspired topics, and soul clinching persona is something I find to be pretty amazing! This s–t is going to be in my libraries rotation for months.