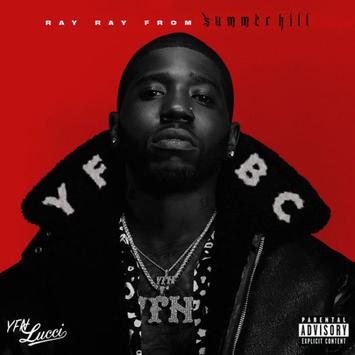 YFN Lucci’s name has been bubbling in the Hip Hop world these last couple of years, meaning it’s about time that he drops his long anticipated debut album “Ray Ray From Summerhill” for us this week. While I’ve praised him as my favorite rap preacher of all time in the past, I also believe he drops some of the most quality trap music out today, too. With that being said, I’ve placed some pretty hefty expectations on him for this album, as I anticipate the ATL rapper impressing us with infectious hooks, truthful bars and real ass content throughout.

I absolutely love “Go Crazy!” It opens the album up, and has YFN Lucci instantly letting the listeners know the type of music you can expect on it. Not only does the track have this hood emotional sound to it instrumentally, but I love the passion that YFN shows on the track, as he addresses the topics of bad seeds, the pressure that has been put on him by the people around him, and the being fiscally responsible.

85% of the reason I like “Down” is because I loved Cam’Ron’s version of the song when I was younger! Anyway, YFN holds his own on this 2018 version of the track, as he drops a couple of heartfelt lyrics that match the soulfulness of the instrumental perfectly. Additionally, the emerging rap star spits with this aggression that is a bit unique for the album, delivering these motivational bars that were meant to be felt and not heard.

F–k all that sentimental s–t, “Boss Life” is all about that honcho s–t, as both ATL rappers let loose about the luxurious lifestyles they’ve obtained through various occupations throughout the years.

Surprisingly, Offset sets the tone of the record by giving us this melodic hook that sounds YFN Lucci-esque, while YFN does his best impression of the Migos star on his verse (This is some ‘Freaky Friday’ s–t!). However, everything eventually returns to normal, as each artist goes back to their respective styles with YFN giving us something harmonic and Offset dropping his signature tongue twisting bars.

The unlikeliest of collaborators meet up for the fervent “Too Much.”

On a good chunk of the records that YFN brings out, he sounds fed up with the responsibilities he has to put up with as one of the few that made it out of his hood. On “Too Much,” he sorta twists that notion up a bit, giving us this (Wait for it!) emotional tune that straddles the line between bragging from start to finish. I’m not mad at it, though, because it makes it feel relatable to the listeners despite the fact that we have about 1/100th of the money he has.

Make no mistake, Wale is bragging on this track, as he discusses all the women, money and game he has in his arsenal through some infectious harmonizing and heavy-hitting bars. I’ve learned that Wale typically spits his toughest on deep south records, mainly because his superior rap skills poke out quite a bit on them.

Both YFN Lucci and Meek Mill are very passionate rappers — they just show it in different ways. YFN usually likes to harmonize, typically creating infectious melodies. On this song, he does that on the hook, but really goes after it rap-wise on his verse. It’s not the best rap verse you’ve heard in your life, but it’s definitely one of the most inspirational ones.

Meek Mill has been through a lot in his life, which is where I think majority of his passion comes from. On his verse for this song, he shows some of that passion (And then some), practically screaming like Stefon Diggs after he made that game winning touchdown in the divisional game of the NFC playoffs. It’s definitely chilling to listen to, especially considering that he is currently doing a jail bid. Free Meek, BTW!

Music is clearly YFN Lucci’s purpose in life, as he uses it to discuss the hardships that he went through in his life. I feel like without it, he would be one depressed dude that sits down at home all day eating pizza pockets and watching hoarders. That might be the reason majority of the songs on this album has this emotional vibe to it, almost sounding like one big song at times. I’m OK with that since it’s his debut album, but I would love to hear a little more versatility from him in his next effort. Anyway, I f–k with the realness that YFN Lucci raps with on this album, as he makes up for his inferior rap skills by showing us a high level of passion in both his lyrical content and vocal performance. Correct, he harmonizes like everyone else in the game, but he does it in a way that is a lot more meaningful than your average rap crooner. When you combine his truthful content with his effective harmonizing, you get this rapper that shares his emotions masterfully for 19 tracks.

Who the f–k was the producer for majority of this Album? Steve Hightower? Seriously, every instrumental has this soulful sound to it that is nothing less than riveting. I’m not complaining, though, because it finally gives us rap listeners a different sound to soak up (And by different I mean Soap Opera-ish).

I think this album is very very solid. I like the fact that YFN Lucci is connected heavily to his streets, dedicating most of his lyrics to the people that either came up with him or acknowledging how it raised him. It’s a body of work that sorta plays out like a book of hood hymnals, something I truly find unique.

MAKE SURE TO LET ME KNOW WHAT YOUR TOP 5 FROM THIS ALBUM IS IN THE COMMENTS SECTION!