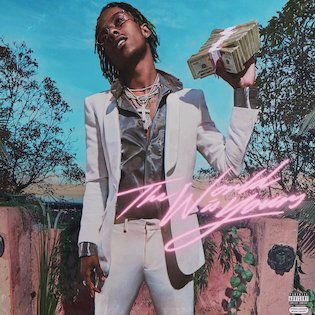 Lets keep it real: Rich The Kid is the poster boy for this new age rap s**t. He’s flashy (See the album artwork), gets plenty of love from the heavy-weights in the game, and mumble raps with the best of them. As a leader of the new school, I think it is imperative that he drops a body of work that confirms his potential, especially considering the fact that there are plenty of ‘Lil Whateva’s” that are willing to knock him off that top spot. I have my doubts and I have some faith in the ATL kid, and expect answers to both on this new album.

Despite having 2/3 of the blazin’ Migos on this track, Rich holds his own on “Lost It,” dropping these explosive bars that remind the people he’s on the winning side of things these days. Surprisingly, I think he’s really good on this track lyrically, displaying this ability to ride the sinister beat like a pro.

Quavo has the second verse, and he definitely makes the track feel like it’s his own. Despite sounding like a stuck up child content-wise, I feel like he’s able to put the beat on a leash, hitting us with several different flows including the ‘bad internet connection/herky jerky’ one that he’s mastered these last couple of months.

Offset kills his verse with some outstanding wordplay. I also like his exuberance on the track, as he comes across like a n***a that finally got a chance to tell this riveting story that he was holding in all day.

Don’t you like the brotherly love this track gives off? It’s almost like Quavo and Offset are playing Rich The Kid’s ‘old n***as that aren’t s**t’ mentors on it.

I love the youthfulness this song gives off! Trippie Redd and Rich The Kid literally remind me of a trap version of “Pete & Pete” on it.

There are plenty of bright spots on ‘Early Morning Trappin’: The dark yet amped up instrumental, Trippie Redd’s rockstar like contributions on the hook, and the duo’s outstanding chemistry. It’s also one of the most unique tracks on this album structure-wise, as it appears there isn’t one.

Trippie Redd stay sounding like a kid that was just told that he was not allowed to eat dessert until he finished his vegetables.

Is this supposed to be a diss record towards Uzi? I hear a few competitive bars from Rich towards someone on his verses, but I don’t think he’s being direct at all. With that being said, the DJ Mustard produced track is all about vibes that are smooth yet heavy-hitting, while Rich the Kid approaches the track on a mission to put n***as on game when it comes to pursuing young fame. I like the track musically, but thought it was weak if you’re talking about something that was supposed to ignite beef.

I love the fact that Rich wanted to put a strangle hold on the game to end this album. I know ya’ll are probably going to like the tracks with Migos and s**t more than this one, but this is definitely one of the songs that caught my attention.

I see absolutely nothing wrong with “Plug Walk.” The track is club-ready, and has the Atlanta based rapper getting his boss s–t on in both the hook and his verses. I love the swag/confidence Rich raps with on it, as he basks in his new found rap fame in a way that only he could.

Doesn’t it feel like the unorthodox instrumental is perfect for both artists to be their weird selves? Anyway, Rich opens up the track with this looney verse and hook, pumping it with some well-needed adrenaline. Even though I can comprehend about 35% of the s**t he’s saying on his verses, I still f**k with the hyped up vibes he delivers.

Kendrick has fun with the instrumental on his verse, sounding more deranged than Rich does. Nowadays, I feel like you hear more political Kendrick than a loose one, which is why I am ecstatic that he brought out Kung-Fu Kenny for this s**t.

If MJ and Dennis Rodman can co-exist on a championship team for 3 years, why can’t this collaboration between Kendrick and Rich The Kid work?

This album was such a pleasant surprise. Even though I expected it to have all the bangers you heard, what I didn’t expect was for Rich to give off the aurora of someone who belongs in the game on literally every track. Correct, he is probably at the top of the food chain when it comes to mumble rappers, but I feel like boss s**t can be felt just as much as heard.

Another thing that surprised me about this album was how versatile it was. With the album boasting 14 full length tracks, Rich made sure he accommodated every type of young trapper out there: Whether it’s the bubbly trapper that is indulging in reckless romantic behavior in “Too Gone,” or the Rockstarish trapper that is ready to rage in “Early Morning Trappin,’ each song on this album has its own unique trap ID, something that makes it perfect for all the people in the world that like to keep their music libraries on shuffle. Unfortunately, Rich doesn’t quite switch up his rapping style much, spitting with the same approach throughout. I’m confident that he’ll eventually learn to assimilate to the tone of the record he’s on.

I feel like the features on this album were really good! Aside from Swae Lee’s unenthusiastic contribution on “Gargoyle,” every guest came with competitive verses on their respective songs, sounding like they were wary of Rich The Kid’s growing success. I’m typically not a fan of 1000 features on a project, but in this case, it actually worked!

I love to compare basketball players with musicians, mainly because I feel like they are alike in the ways they move. With that being said, Rich The Kid reminds me of rap’s version of Russell Westbrook: He’s relentless lyrically, attacking whatever beat you give him — much like Russell attacks every defender that comes his way on the basketball court. For the most part, Rich will succeed using that approach, but at the same time, he will have a couple slip-ups (or turnovers) along the way. By no means do I think this album is a slip-up, but I also do not think it’s MVP caliber either. What it is is a a solid album that I think shows this hunger from a young artist that watched how his counterparts were making music and wanted to add his own flair to it. I love that approach, and think Rich will have a long and successful run in this rap game if he continues using it.