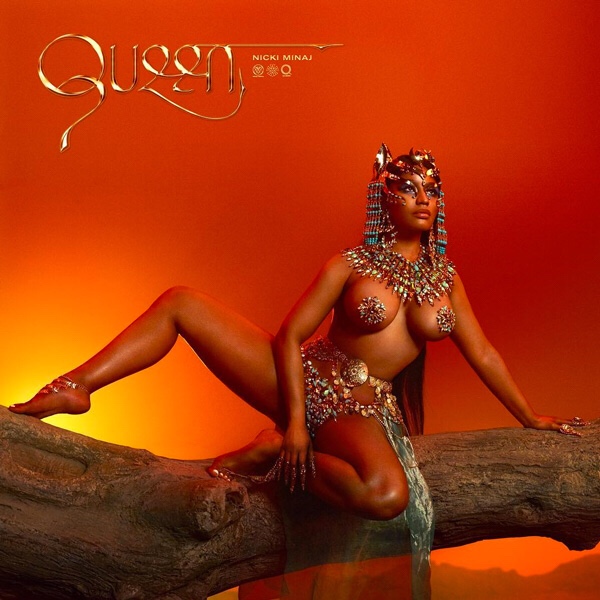 Nicki Minaj is one of music’s most important brands. Her image alone is worth millions, and the influence she has on the youth is impeccable. But honestly, I feel like she hasn’t even reached her potential musically. Don’t get me wrong, she has shown that she can do a lot of different things throughout the years, but I’ve yet to see her take advantage of all of her highly rated skills for a complete body of work. With this “Queen” album, I am very hopeful that hip hop’s first lady can finally achieve that goal.

“Majesty” is beyond bizarre. First and foremost, one side of it has this Charlie and The Chocolate Factory ass instrumental and hook that makes me feel a bit uncomfortable, while the other side is as rugged as the girls section at Forever 21. Labryinth is on the cute part, Nicki is on the grungy, and Eminem is on both.

Nicki’s two verses are trill as f**k on this song, as she brags and boasts about her power in the industry. She also challenges all competitors to a battle, provoking them by doing a bit of John Starks-like trash talking.

Eminem has the third verse, and he starts it off slightly light-hearted, revs things up a few seconds in, and then simply goes ham with some tongue-twisting rhymes that makes him sound like an Animaniac the rest of the way. By the end of his verse, you’ll forget who’s song it is.

Nicki returns towards the end with this troubling medley that has her letting the world know that jealousy is a disease. It’s pretty weird.

I spent half of this review breaking down this song.

“Miami” will be glanced over mainly because it sounds like the epitome of a album-filler, but it is very solid record. It is chorus-less, features this dark/wavy instrumental by Murda Beatz, and excels mightily when it comes to grittiness.

In my opinion, the bars Nicki drops on this song is the best on this album. Using this tricky flow, she shows off her astute word-play while also letting the world know that we aren’t even in her stratosphere when it comes to living life. But what I love about her approach is that it is carefree, as she opts to have fun with the beat instead of scalp it.

This song is very Drake-like.

Nicki approaches ‘Chun-Li’ with the highest level of confidence a rapper could present. Throughout it, she praises herself for being the best in the game while addressing a “bitch” who isn’t coming off the bench. Her similes and metaphors are top-notch, while her words are intimidating. (I really wonder what the “bitch” is doing as she listens to Nicki’s lines.) Lyrically, this is a really good song, however, it sounds too personal to be fully enjoyed.

We couldn’t get Nicki to play nice with Lil Kim, but at least we got something with her and Foxy Brown, right?

So “Coco Chanel” probably won’t get major play on your iHeart radio stations, but it will at your local reggae club. It features this gutter dance-hall instrumental that practically begs you to dutty wine, and some tough ass bars by both of our rap ladies.

There are four things I love about this song:

1. How both Foxy and Nicki ride the heart-pumping beat so flawlessly.

2. How much each artist reps their city on their parts.

3. The buddy-buddy vibes they seem to have.

When you combine all of these aspects together, you get one of the toughest records to come out of the east coast since “Gummo.” I don’t think it’s the best song on this album, but it’s definitely the most impactful.

Nicki Minaj flipped one of my favorite Biggie tracks on “Barbie Dreams.”

As you may or may not know, Biggie’s original version of this song was called “Dreams (Just Playin’),” and in it, he talked about smashing the most popular female R&B artists in the game while also insulting them. I like the track for how raw it is, and absolutely love the instrumental behind it. Fast forward to 2018, and we get an updated version of it in which Nicki takes aim at all the hip hop males of the world, not holding back a single bit. The swag she displays on her verses is unbelievable, she finishes her bars flawlessly, and most importantly, she’s being very disrespectful. How disrespectful? She calls out Thugger for stealing her clothes, makes a DJ Khaled fat joke, and even takes a shot at her ex-lover (Meek Mill). Woo wee, this s**t is tea-sipping worthy.

The track eventually turns into this alarm-heavy banger that has our hero talking about some explicit s**t. I guess this is the last dose of insult to the people she was talking about on the first part, as she pretty much shows them what they can’t have.

You cannot tell me that Nicki Minaj didn’t put her heart and soul into literally every track on this album. When it comes to creativity, I can feel this level of focus from her that is top notch throughout it, and when it comes to her bars, they sound like they were proofread by that Microsoft Word Paper clip guy. In my opinion, this is one of the reasons you can’t hate on Nicki. She tries and cares about what we think of her rapping skills, and does whatever she can to win our approval. It’s literally a case of the seller giving the consumer exactly what we want. However, I think this way of thinking is a blessing and a curse. It’s a blessing on tracks that call for the rawest of bars, because bars only get respected more when they are truly thought through. But when it comes to harmonizing and developing melodies, the listeners can feel when you’re trying too hard to draw us in, and it can penalize the naturalness of a song. Luckily for us, you get more street rap records than forced pop hit on “Queen.” (I say it’s a 80/20)

Let me break down Nicki’s rapping a bit more: First and foremost, you can argue that Nicki Minaj put up the best rap performance for a full length album this year. She finished her bars masterfully, adjusted to the tone of whatever record she was on like a seasoned vet, dished out punchlines like they were free lunch and was killer with both the word-play and metaphors. Do you notice anything missing from that lineup? If you guessed ‘great lyrical substance,’ you’re correct! I felt like Nicki devoted way too many of her lyrics to self-promotion and meaningless s**t, and don’t get me wrong, I like it for a few songs, but eventually, I got tired of it. Mind you, she’s been rapping like this for a while, so I can practically finish her bars when she talks about b*tches being her sons and barbies traveling the world. So my advice to you, the reader, is to enjoy every song as much as you can, but really hold on tight to the ones that have unique lyrical content.

I actually wasn’t the biggest fan of the features on this album. Nicki adhered to whichever guest she collaborated with, and in some of the songs, she simply couldn’t keep up. With that being said, I enjoyed Future’s feature on “Sir” (A Song I didn’t quite like), Arianna Grande’s on “Bed,” and especially Foxy’s on “Coco Chanel.”

As for the production on this album, it was amazing. Everything sounded high-octane, and the mix of trap beats, pop beats, commercial rap beats, Caribbean beats, cartoon beats, beats by dre,, etc. etc., was done brilliantly.

I’m ready to say that this is Nicki’s most explosive/impressive/enjoyable album to-date. As a listener, she kept me entertained for at least 18 of the 19 tracks, and these days, that’s a lot to ask for. And despite the slightly above average rating I gave the album, I do think she lives up to her potential all the way. However, Queen is no overwhelming keeper.