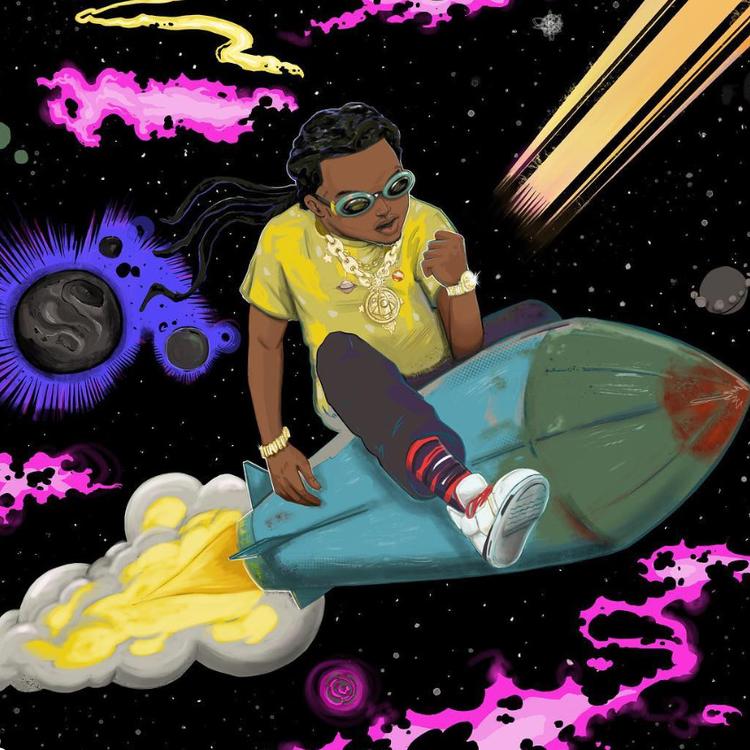 To many, Takeoff is the best member of Migos. I beg to differ, but I understand where the people that think that are coming from. I do see him as the toughest spitter out of the three, though, as he typically adds a layer of grit to whatever song he’s featured on. In “The Last Rocket,” he looks to make people like myself look stupid as hell, dropping off a full length project that showcases his ability to draw listeners in.

If Takeoff is leading the wave, I’m pretty sure we’re going to end up at the strip club.

“Lead The Wave” is similar to Quavo’s “Big Bro,” as Takeoff talks about wanting to be an example to n***as on the come-up. From time to time, the ATL native outlines how to boss up, preaching forgiveness, reminding individuals to keep their circle tight and imploring artists on the come-up to be self-made. At times, he veers off course a bit, blabbing about useless s**t like getting wasted, but for the most part, I liked the knowledge he dished out on this joint.

When you listen to this album from start to finish, “Last Memory” makes a lot more sense. I feel like it blends in with the overall sound of the project, and sorta serves as a half-time break for all the other explosive s**t before it. On it, Takeoff switches between this drowsy, mellow and intense rapping style, somewhat sounding like a bi-polar n***a. Content-wise, he boasts about his distinct lifestyle, discussing how he woos his chicks, spends his money and relates with other hood n***as.

Each time I play this song, it gets better.

“Casper” is all about its vibes. Powered by this smooth trap instrumental by 808 Mafia, Takeoff gifts us with quite the performance, delivering a catchy hook, some humble bars and gaudy flows throughout. I absolutely love how the song flows, its unique structure, and most importantly, its ability to be a club banger just as much as a record that you can play while you’re chilling on the bed prepping to call it a night.

You think there’s going to be a dance to “Vacation?” I hope so!

If you aren’t feeling “Vacation,” get you ears checked. First and foremost, the beat attached to it, produced by Murda Beatz, is cold, heavy-hitting, and has a great tempo. Secondly, the energy that Takeoff raps with is exhilarating, as he toys with a couple of different flows, flexing on his competition with some real ass lyrics while utilizing this effortless delivery. When you add the trill ass hook he was able to lay down to the grand scheme of things, you may very well have yourself a hit on your hands.

“She Gon Wink” is probably going to be the biggest hit off of this album. It features Quavo on the hook and a ruthless version of Takeoff.

I love the rhythm attached to this song, the melody Quavo was able to gift us with, and most importantly, how both rappers feed off one another’s energy. You can practically hear the chemistry between the two, something I and Steve Kerr find fascinating.

Quavo, you ain’t slick, bro, you tried to take over this song! N***a, let Takeoff shine for once, man!

OK, I am ready to admit that Takeoff is the best rapper on the Migos. No, he doesn’t have the commercial appeal that Quavo has, or is able to turn a beat upside down like Offset can, but what I like about his artistry is that he’s consistent: consistent when it comes to laying down appealing hooks, consistent when it comes to delivering standout bars, and consistent when it comes to giving off street vibes. On “Last Rocket,” the Atlanta native kept the listeners engaged by staying consistent, dropping off an abundance of tracks that the people will feel either for its authentic nature, club potential or gritty vibes. I also felt like his lyrical content was a lot more meaningful than I anticipated. I know, he talked about the same s**t that all the other trap rappers in the game talk about, but I felt the metaphors he used to describe his lavish way of living stood out. In other words, Takeoff showed throughout that he was a different breed from your typical trappers, but at the same time, made sure to acknowledge that he sees what everyone else in the game sees.

The production on “The Last Rocket” was fantastic! Laced with trap bangers from Murda Beatz, 808 Mafia and more, I felt like Takeoff had the proper style of instrumentals that allowed him to do some experimenting while also staying true to his traditional artistry. I felt like this aspect of the album was key, and played a major part in the projects consistent nature.

You know what I loved about this album? There were only two features on it. Takeoff took care of a vast majority of the responsibilities, proving to the world he is more than capable of appealing to your average rap fan. In comparison, Quavo’s solo project had twelve features, and in my opinion, majority of them were unnecessary.

Takeoff impressed me with “The Last Rocket.” I felt like it was a body of work that was passionate, from the heart, and as dynamic as any other rap album I’ve heard this year. I’m not ready to say it’s better than the first Culture, but I will say it is probably better than any other full length project the Migos dropped in the last couple of years.