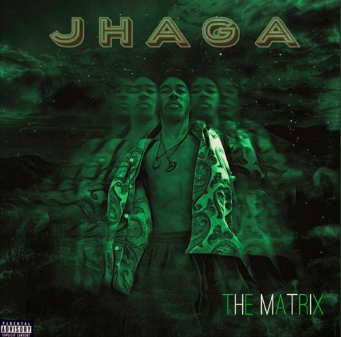 JHAGA is motivated to blow, come hell or high water. On “The Matrix,” his latest album, he shows an array of skills, which ultimately makes for some of the most enjoyable hip-hop music you would hear in the industry today.

“The Matrix” is the title of this album, so you knew the one song named after it would be fire!

On “The Matrix,” JHAGA drops some very dynamic bars over this futuristic instrumental. What I like about the song is that it serves as a theme song of sorts, as JHAGA gets a chance to explain what motivates him, keeps him energized and makes him paranoid. What I like even more about this song is that he decided to use this complex approach to explain these feelings.

I knew JHAGA wasn’t from this planet!

For those of you that love old school hip-hop, you will love “A Player In The Game.” It boasts these 90’s rap vibes, while JHAGA shows off his ability to deliver some boom bap flavor on his verses. Content-wise, you get bars centered around loyalty, being woke to what’s going on around the world and appreciating life every single moment. If you can’t f**k with some real s**t like this, you must not know what real hip-hop sounds like.

You cannot convince me that “Find Love” is not a hit!

“Find Love” is special. It is powered by this Caribbean instrumental that brings out nothing but vacation vibes from start to finish. Over this instrumental, JHAGA shows off his R&B skills, crooning softly about finding love in the midst of a busy schedule. On the real, I f**k with the melody JHAGA was able to produce on this song, especially when he begins to glide his way to the finish line.

In my eyes, a rapper who decides to spit over a soulful instrumental can do no wrong. In “All My Real Ones,” that is exactly what you get! On it, JHAGA spews some wisdom-filled bars about everything from grinding to staying true to oneself. I love the erratic flows he uses throughout, the occasional melodizing he does, and most importantly, the passion he shows literally from start to finish. I also f**k with the punchlines he dishes out.

Is there a better way to start an album off than with “All My Real Ones?”

JHAGA shows the world how much of a talented rapper he is in “These Jabronis.”

Anybody questioning JHAGA’s mic skills (I don’t know why you would) should listen to “These Jabronis.” On it, the Jaguar records signee absolutely decimates this traditional trap instrumental with an impregnable flow, sick ass punchlines and a level of wordplay that is out-of-this-worldly! I also love how he practically challenges his ops throughout, calling them out for their sub-par rap skills and flaky personas. Uh huh, this s**t is fire!

JHAGA is one helluva musician. He sings really well and raps even better. I also think he shows a level of passion in his music that is hard to ignore, which truly makes The Matrix entertaining to listen to.

I don’t know about you, but I love when rappers are competitive and serious about their craft. On several different songs, JHAGA challenges his competition, never holding back a single second. He also does a great job of spewing out knowledge whenever he gets the chance, usually discussing lessons learned, motivational tactics and how to stay true to yourself. However, my favorite part about JHAGA’s rapping on this album is his outstanding flows, punchlines and word-play. Trust me, it’s top notch!

One thing that caught me off guard on this album was JHAGA’s ability to sing. On songs like “About U” and “Find Love,” he flexes his vocal skills, hitting notes similarly to R&B singers. I also like how he shows no fear opening up on these songs, directly showing the world his true feelings about deep topics such as relationships and ambitions. I think this side of JHAGA is the one all types of music fans will love.

The Matrix is a really good listen. If you’re a rap fan, I can guarantee you will like it!