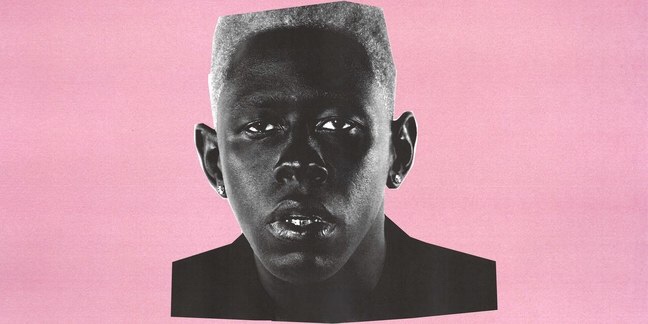 In order to fully enjoy a Tyler, The Creator project, I feel like you have to appreciate the ins and outs of the creative instincts that go into making music. In “IGOR,” the Wolf Gang rapper shows that he’s still lapping the field when it comes to that department, gifting us with a twelve track body of work that is fantastic in every facet of music.

Never in a million years did I think I would be provoked to break-dance to some Tyler, The Creator s**t…

”I Think” is a high-octane track that features this disco-like instrumental. Over this instrumental, Tyler opens up about this lover of his driving him astronaut lady crazy both when he’s (I speculate his lover is a man) around him and when he’s not. Personally, I get the sense that Tyler wanted to make it seem like he was too nervous to say how he really felt about his relationship situation on this song, so he got a few boisterous singers to help him convey his thoughts in the background. If you recall, that is how Shaft got his confidence.

Tyler, I get it, you are gay, just come out and say it! We embrace you, and are so ready to have a creative mind like yourself be a major staple for the LGBT community.

I swear to you, the way this album opens up is fantastic! “IGOR’S Theme” is hard-hitting, erratic, and most importantly, disruptive. While you don’t hear much from Tyler on this song, the soulful singing you get from everyone else on it makes up for his absence.

Hearing “Yea Hoe” reminded me that Tyler’s petty spirit was written all over this song.

Tyler says that he draws inspiration from Pharrell Williams, and listening to “EARFQUAKE” confirms that, to me. With the song being powered by this trunk-rattling instrumental that has glossy elements attached to it, listeners are treated to some Pharrell-esque singing throughout, which results in music that can be felt just as much as heard. Additionally, you get random sprouts of hip-hop on the song (From presumably Playboi Carti), which I think makes it acceptable for thugs to bump in their cars.

Tyler, The Creator makes a brief appearance on this song, sounding like a n***a that tried to sing after having a stroke. You know what his part reminded me of? A manager that thinks he can do your job for five minutes, but burns s**t because he or she doesn’t know what the f**k they are doing in actuality.

“A Boy Is A Gun” is one of the only songs (if not the only one) in which Tyler raps from start to finish. On it, he spills his guts about a relationship he’s in, (which I believe is with a boy) in which their love seems concealed, toxic, but at the same time, filled with pleasure when s**t is going good. With the song featuring a soulful instrumental that contains this crying ass woman singing throughout, Tyler did a great job of making sure you were engulfed in his love story, feeling OK with coming across as the dreaded Flower Scum F**k Boy.

Hey Tyler, it’s me again! Since I passed Spanish with a D in high school, I am kind-of well-versed in the language. I know ‘Hombre’ means ‘man’ in Spanish, so you are going to have to fess up to being gay! I think it’s OK, and can actually be a positive to those that don’t quite have a voice like you.

”New Magic Wand” is probably the closest thing to a trill cut on this album. On it, You get a full vocal performance by Tyler in which he sings angelically and raps devilish throughout. Production-wise, the song specializes in shifting gears, having its moments of soothe and its moments of tumultuous-ness. The combination gave me a seizure.

Aloha Tyler, it’s me once again! Ladies say I have a magic wand, so when you talk about craving one, I understand what you mean. I know, I am not gay like I think you are, but that doesn’t mean I don’t understand what it means to crave something lusty.  I think it will be dope if you come out! Matter of fact, I will retweet whatever you want me to retweet to show I stand in unison with any orientation you decide to pursue.

4. EXACTLTY WHAT YOU RUN FROM YOU END UP CHASING (N/A)

When I wasn’t putting two and two together about Tyler’s sexual orientation, I was really enjoying the music on this album. Below, I will tell you why:

“IGOR” felt like some Tyler The Creator on ice shit. You get full on symphonies, heartfelt subject-matters and deep ass instrumentals on it. As expected, you never know which direction the Odd Future honcho will go in each song, which makes for an unpredictable body of work that has more twists and turns than a roller-coaster.

Tyler, The Creator left his rap persona behind for a good chunk of this album, opting to play this weirdo version of a sappy singer. Nonetheless, his persona is felt on every single vocal performance you hear him on — whether it’s good or bad. It’s clear Tyler’s vocal contributions aren’t the best thing on this album, (I’m sure he’s fine with that), however, his vulnerable lyrics (Whether it’s coming from a sarcastic place or not), passion and attempts at being the second coming of Luther Vandross was intriguing to listen to.

The amount of soul that you get on this album is astonishing. From start to finish, you get serious melodies, emotional instrumentals and pretty deep subject-matters centered mainly around heartbreak and love. (Whatever the f**k Jaden Smith did to Tyler in their relationship has turned him into the second-coming of Stevie Wonder.) I’m not going to call this project the greatest thing since The Temptations last album, but I do respect its timeless feel.

”IGOR” isn’t a traditional listen, (Especially for someone with a low IQ like myself) so I won’t pretend like I’m going to play it night and day or understand the intricacies of what it is about. What I will do is understand the complexities behind it, especially how it promotes creativity and approaches self-identity, heartbreak and love from an angle I’ve never heard before.