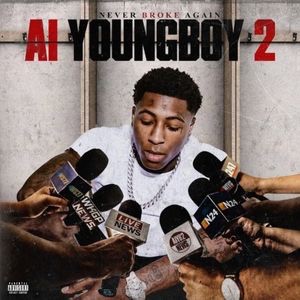 In “AI YoungBoy 2,” YoungBoy Never Broke Again has revenge, money, and real love on his mind.

YoungBoy sounds like he’s hurting bad on “Lonely Child.” Not only does he sing very emotionally on the track, but lyrically, he opens up about missing his father, kids, and real friends (The n***a definitely sounds like he needs both a home cooked meal and a hug on this song).

“Rich As Hell” is probably the most riveting song you will hear this year. Not only does it feature this piano-heavy trap instrumental that Shakespeare would be proud of, but the terrorizing bars that you get from YoungBoy Never Broke Again on it will give you the chills.

If you like audio books about revenge murders and drug-dealing, I think “Rich As Hell” is for you!

“Carter Son” sounds like some sacred rap s**t, to me. As soon as you press play on it, what you are greeted to is a hard-hitting/ardent instrumental that feels like it earned its hood stripes back in the 70s. Over this instrumental, YoungBoy spits both focused and heinous bars about everything from mobbin’ to growing up in an environment that is meant to make the weak crumble.

Personally, I love how YoungBoy switches between gritty and soulful on this song, finding completely different ways to solidify his gangsta to the listeners.

“Time I’m On” feels like YoungBoy Never Broke Again’s theme song. For starters, the track features this heavenly trap instrumental that has quite a tempo attached to it. Over this instrumental, YoungBoy gifts us with a highly infectious hook and terrifying lyrics about blowing n***as away, sleeping with choppers, f**king with dusty h*es, and sipping on codeine (Yikes).

I feel like this song has a helluva bop, feel-good vibes, and a pretty dope melody attached to it.

“Seeming Like It” is deeper than Drop Zone’s drop. With the track being powered by this cold ass trap instrumental by Mike WiLL Made-it, YoungBoy lets loose, singing like a hood preacher on the hook, and rapping like a trill n***a on his verses.

The topic behind “Seeming Like It” hit me hard. On it, YoungBoy comes across like a dude that can’t help but make terrible decisions, even though he’s seen how his terrible decisions have created inescapable problems for him. What makes the song even scarier, to me, is that at times YoungBoy sounds proud of his devious ways, while in other times, he sounds disheveled and frustrated by them.

Every YoungBoy Never Broke Again project I listen to makes me feel slightly heartbroken. What you usually get from the Baton Rouge rapper on his projects is lyrical content that is violent, troubling, and distressing. On some real s**t, listening to YoungBoy is like listening to a child that knows his time on this earth is probably going to be short.

“AI YoungBoy 2” doesn’t lack in drama. If the gospel-like instrumentals don’t get to you, then YoungBoy Never Broke Again’s soulful singing and tenacious rapping will. In other words, never for one moment does this album lack realness or gutter vibes, which in my opinion, will have you at the edge of your seat from start to finish.

What “AI Youngboy 2” does lack is creativity, as on it, you get similar tracks to what you heard from YoungBoy in the past five to six albums/mixtapes. Whatever the case may be, it’s clear that Youngboy loves staying in his pocket when he makes music — an aspect that I believe makes him authentically street to some, and slightly stale to others.

Though you might think you are unqualified to relate to Youngboy’s music (S**t, the only thing me and him have in common is that we were both born in Baton Rouge, Louisiana), he definitely does a good job of making his unfathomable war stories sound lifelike and naturalistic on “AI Youngboy 2.” If you ask me, that’s a helluva talent!

LET’S START A DISCUSSION! LET US KNOW YOUR TOP 5 FROM THIS ALBUM IN THE COMMENTS SECTION BELOW!