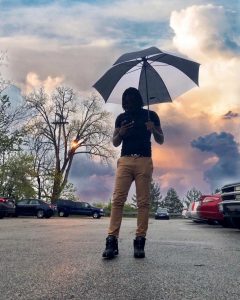 ChrisDaCEO tackles some deep topics on “Till I Drop.”

I love how “Till I Drop” opens up Mafia Season II. For starters, I f**k with the beat that powers the song and how, over it, ChrisDaCEO gifts us with a vocal performance that is passionate, inspirational, and melodic. I also like how he opens up about his personal struggles in the song, showing no fear in talking about his baby mama drama and more.

“Peace” is easily the catchiest song on Mafia Season II.

“Peace” will definitely strike a chord with you. Not only does the song feature a slow-paced beat that is intoxicating, but you also get a singing performance that is beyond emotional and lyrics that are deeper than Pacific Ocean’s water. If you are someone who has dealt with someone that isn’t quite up to par with what you want to be with, you will find the song to be relatable.

ChrisDaCEO is both fiery and heartwarming on “Middle”

ChrisDaCEO proves he’s about that life on “Dying Breed.”

“Dying Breed” is my favorite song on “Dying Breed.” On the song, you get a beat that features both Country and trap vibes, and lyrics by ChrisDaCEO that are both gangsta and real. If you are putting in work in the streets, “Dying Breed” should definitely strike a chord with you.

ChrisDaCEO gets disrespectful and nasty on “Lick.”

On “Lick,” ChrisDaCEO shows off his savage side. On the song, he leaves behind his melodic ways in favor of a style of rapping that is a grungy as it gets. He also talks about snatching b*tches that aren’t his and doing some pretty serious things to her (Ooh wee).

“Blew Pazzed Up” was made to galvanize the real.

On “Blew Pazzed Up,” ChrisDaCEO is ready for smoke and some good punani. What I love about the song is that it has this hypnotizing feel. I also f**k with the way ChrisDaCEO switches between gassed up and cold vocally on the song. Matter of fact, at times, he sounds like a hood Terminator.

“Nu Wave” is an absolute hit!

“Nu Wave” is powered by the following: A bass boomin’ beat that is meant to f**k speakers up, a hook that is beyond catchy, lyrics that only real ones can relate to, and a myriad of flows. Though ChrisDaCEO displays tons of swag in his music, on “Nu Wave,” his swag is on another level (Or a Nu wave).

ChrisDaCEO lets the world know that he is really about that life on “Round Trip.”

ChrisDaCEO isn’t a killer, but don’t push him. On “Round Trip,” he raps melodically/coldly about sliding on his opps. He also reminds his foes that he is the king of his city. Though the song is as violent as it gets, what makes it interesting is that it gives off hood gladiator feels.

“MC Hamma” is a clever, trill, and inspirational banger.

Let’s be real: ChrisDaCEO talks a lot of s**t on Mafia Season II. On “MC Hamma,” he talks so much s**t, you can build a house with it. Not only does he brag about his ability to replace h*es, sell records, and shoot guns, but he also brags about his come up, too. While you’re going to love how rawly he raps on the song, you can’t ignore the relentless flows he raps with.

There is a string of heinous-ass songs on Mafia Season II. “Firecracker” changes the pace of the album, as, the song boasts a beat that is smooth (It still has hard-hitting elements, though), a vocal performance by ChrisDaCEO that is more soothing than gritty, and lyrics by him that revolve around unadulterated love-making. If you and your chick are on the verge of doing some freaky s**t, this song should make s**t happen.

“Excuses” is probably the most passionate song on Mafia Season II.

“Excuses” is powered by this emotional trap beat that has its fair share of bops and cold vibes. Over it, ChrisDaCEO sings his heart out, discussing the impact that the streets, his friends, television, his relationships, and his mindset has had on his life. If you are someone who is currently trying to figure out your own life, “Excuses” should definitely strike a chord with you.

Mafia Season II is yet another solid project by ChrisDaCEO.

As someone who has covered ChrisDaCEO for a few years now, I have heard the growth in him as an artist. With that being said, on Mafia Season II, his melodies are crisper, his lyrics are more exact, and his raps are more appealing. I also love how personal the Cleveland musician gets on the album, as, throughout it, he unapologetically talks about his rough come up, his love life, and his beefs. All in all, Mafia Season II is a great listen if you are into high-quality trap music.