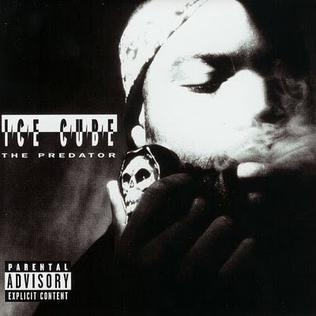 “The Predator” captures the race wars of the 90s from the perspective of an angry black man.

5. WHEN WILL THEY SHOOT

“When Will They Shoot“ sets the tone for The Predator.

Ice Cube takes shots at racists, the US government, and his critics in “When Will They Shoot.” What I love about the song is that it features a version of Ice Cube that is unchained and controversial.

I can see an old white guy saying “Oh My” over and over again while they listen to this song.

The beat that you hear on “The Predator” is way more chill than the other beats on The Predator. The sturdy rap flow Cube uses over the song’s beat is outstanding, to me.

Cube talks about “raping the statue of liberty cause it’s a lazy hoe” in one of his verses on “The Predator”… That should tell you where his mind was when he made the song.

“We Had To Tear This Muthaf**ka up” will literally make you want to tear something up. Matter of fact, while I was listening to the song, I tore up my ‘Reading is fundamental’ t-shirt that they gave me in elementary school (F**k reading).

The xylophone that you hear on “We Had To Tear This Muthaf**ka up” makes the song feel like some activist s**t. As for Cube, his lyrics about the corruption going on in White America complements the song’s vibes really well.

“Check Yo Self (Remix)” is way more respected than the original version of the song.

When Ice Cube raps about being the person you don’t want to mess with, it’s believable. Matter of fact, Cube sounds like he had about three people in a headlock while he was laying down his verses on “Check Yo Self (Remix).”

Isn’t the chorus on “Check Yo Self (Remix)” one of the best of all time? Kudos to Das EFX.

BTW, I’m pretty sure that a big penis up your ass is bad for your health… (Both mental and physical health)

“Good Day” is easily one of the greatest rap songs of all-time.

Is there a single bad thing that you can say about “Good Day?” Do I even need to explain to you why this is the best track on The Predator? The real argument is whether or not it’s the best rap track ever…

The Predator is one of a kind! The album is political, it’s hard-hitting, and best of all, it’s violent. If you thought that Eminem was the crudest rapper ever, Cube’s lyrics on this album will make you change your mind.