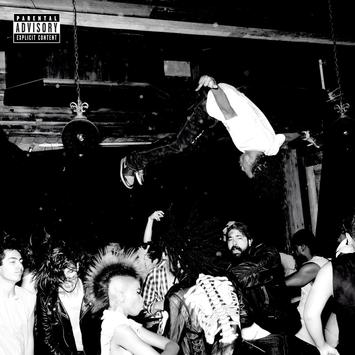 I love how Playboi Carti moves in the industry! You never hear about him in the media, and he never lets the world know when he’s ready to release his music. Instead, he just silently puts out fire and keeps it moving. Today, our guy decided to release his second album in as many years, and trust me, like you, I know/knew next to nothing about it.

Love does hurt…Did you see that elbow he gave DeRozan in Game 1 of the Raptors/Cavs series?

I guess you can call what Travis Scott and Playboi Carti are doing on this song ‘Trading Bars’, as each artist gets a chance to get their rockstar on over this erratic instrumental. Playboi opens it up with his usual karate sounding ad-libs, but ultimately starts handing out bars that revolve around bragging and boasting about his reckless ways through his signature choppy flow. Travis shares the same sentiments as Carti on his verse, but uses more of a melodic approach to get his point across.

Rappers get being a ‘rockstar’ mixed up with being ‘reckless’.

Playboi Carti and Uzi have built up quite the rapport, collaborating on an abundance of records these last couple of years. Their buddy-buddy relationship really manifests itself on this banger, as both young rappers go full out ape s**t over this dramatic/bass boomin’ instrumental.

I love how Uzi starts the track off dropping bars on the build up to the song, then Carti loses his s**t when the beat breaks down. It’s almost like Uzi is Cliff Paul and Carti is Chris Paul.

“Old Money” has this bop to it that gasses Carti up to be that version of himself that we’ve all come to love — you know, the version in which he comes across like a hype man for a headlining act. Well he’s become the headliner these days, and his tales of old money and new hoes that he spews on this song has now become his words of wisdom.

Carti and Tiller are bringing awareness to anti-socialism in hip hop by collaborating with each other on this track.

Much like everything else on this album, “Fell In Luv” is one big catchy tune that never lets up in infectiousness. The instrumental combines these R&B vibes with litty ones, allowing for both Bryson and Playboi to get their playa on.

Just like anti-social brothers would do, Playboi and Bryson share similar feelings on their respective verses. While Playboi’s rapping is a bit more spotty than Bryson’s rapping — and Bryson’s singing is a lot more polished than Playboi’s singing, I do feel like they make quite the tandem on this song.

I can already see the Instagram models of the world losing their minds and pants to this song.

“Poke It Out” is that one colorful song on the album that focuses solely on catchiness and cliche lyrics. It’s also very repetitive… But I happen to like repetitive for Playboi Carti.

Playboi sounds like a dude that was staring at Nicki’s booty while he was laying down his verse on this song. He’s very erratic, and at times sounds like a n***a that is trying to impress a ratchet chick.

Lets keep it real: 93% of the people who clicked on this song came for Nicki Minaj. Why not? She has been killing s**t lately, and this song is no exception. Initially, she comes across like a groupie on it, saying Playboi’s name over and over again like he was the Candy man. But she does eventually get to it lyrically, dropping yet another bossy verse that never lets up in grit.

You don’t want Nicki to ‘poke it out’… If she did, I would have to call off of work.

On the real, Carti is not a man of many words, and that might be the reason you don’t hear much from him other then when he drops an album. With that being said, this approach results in some of the most repetitive music you will ever hear in your life, which means you may have to lower your IQ level just a tad bit to fully enjoy it.

One thing I like about Carti is that he understands his sound and never deviates from it. Every song seems to have similar cadences, bouncy instrumentals and erratic subject matters on this album, and as a result, it straddles the line between consistent and tedious. The good thing is that he is never void of energy, as his jumpy approach runs rampant from song number 1 all the way to 19. I’m an advocate for these young cats utilizing their youthfulness, so I’m not mad at the approach.

Carti’s first album only featured A$AP Rocky, Leven Kali & Lil Uzi Vert; this one features Nicki Minaj, Young Thug, Uzi, Bryson Tiller, Skepta, Chief Keef, your momma, my momma, etc, etc. It’s safe to say Carti’s wave is one that other artists in the game are happy to be apart of. With that being said, every collaborator gave an extra boost to the song they were on, and added clarity to an album that was mumble-heavy.

These new rappers like Carti are hard to figure out… In a sense, they lack useful content when they rap, utilize the same flows, and rap over the same beats; but something about their simple-minded approach continues to draw people like myself in. Is it their charm? Is it their ability to tap into your body as opposed to your mind? Whatever the case may be, music like this continues to win despite what Cole thinks.