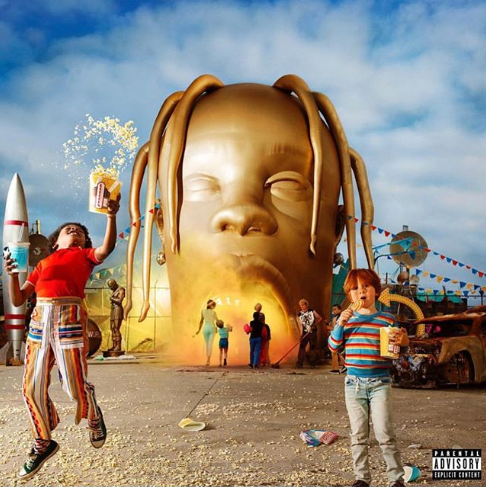 Doesn’t It feel like something is missing in the hip hop industry when Travis Scott isn’t dropping consistently?  I think that is one of the main reasons people have been waiting for “Astroworld” like it was a sequel to Casablanca. If you think about it, in this new wave of ‘out-of-this-worldly’ rappers, Travis reigns supreme, mainly because he always finds a way to step outside of the box while still associating himself with the same styles your ordinary trap rapper uses. In this new project, I expect him to continue to use that same method, but at the same time, I feel like I’m making a mistake by trying to enter into the mind of a man that usually sounds out of his mind when he makes music.

5. STOP TRYING TO BE GOD

“Stop Trying To Be God” is special. First and foremost, it features this emotional instrumental that features some hard hitting 808’s and a f**king harmonica (Played by Stevie Wonder) that keeps poking at my soul. Throughout the hook, Kid Cudi does that whole humming ad-lib that has historically left engravings on my heart, and Travis does some Bone-Thugs-N-Harmony-esque singing that’s soothing to my ears. (Yep, people, here comes the waterworks)

On his verses, Travis discusses some of the realest s**t I’ve ever heard him discuss, touching on topics such as treating people right, judging individuals and being loyal to fam. It’s deep s**t, and quite honestly, some s**t that had quite the effect on my conscience.

OK, the pastor at the end of this song was the icing on the cake. I need to go to church, ya’ll!

“Stargazing” is exactly how I expected this album to open up: With a heavy-hitting beat, some catchy lyrics and lots of drug-influenced chitter-chatter! Travis made sure he reminded you that he’s the bizarre king of the world on this song, going back and forth between a normal and Looney Tunes sounding n***a throughout. Appropriately, you don’t get many words from our hero on this portion of the track, just some zoned out sentiments about being high out of this world and enjoying life.

About halfway through this song, it switches into this tough ass record in which Travis talks about how he doesn’t see the new problems and enemies surrounding him these days, instead, he sees new money and bad chicks. Much like how the first portion of this track reminded you of Travis’ astute artistry, this portion of it reminds you of his grittiness.

I have reason to believe that this is the song that pushed Travis into legendary status.

First off, how did La Flame know that Butterfly Effect was one of my favorite movies of all time? This dude is a muthaf–kin genius! Ok, now to the actual song…

In my opinion, Travis Scott has dropped a few songs that sounded similar to “Butterfly Effect” (‘Sweet Sweet,’ ‘Pick Up The Phone’), but something about this particular go-round sounds a lot more polished. I feel like Travis heard the beat to “Butterfly Effect” and understood that the most important thing he needed to do to it as an artist was ride it until the muthaf**kin’ wheels fell off! He did just that, and added all the other magnificent s**t you hear in the background to trip you out in the process. I mean seriously, do you care what he’s talking about on this song? “Take a sip?” “M&M’s?” “Heating up?” “Icy like a hockey puck?” What is he talking about? I do know this, he’s zoned the f**k out!

N***a, I put curry powder on my cheese pizza, I’m the sickest of them all!

The build-up that you get on this song is probably appropriate, and that is because it is not an everyday thing to get Drake and Travis Scott on a song together! (We should actually pay taxes on this song) Unfortunately, it leads to a beat that was kinda ‘meh’, but it’s all good, things only look up from here.

Thankfully, one minute in, the beat to this song switches. Not only does it switch, but it switches to something tougher than that one white girl on “Wild-N-Out” that out-raps everyone. Much like the second half of “Stargazing,” you get this version of Travis that is intent on dropping serious bars on this part, bragging about all the clout that he currently has and talking about his growing fame. I like this version of Travis!

OK, so Drake is back, folks, and this time around, he raps aggressively over this terrifying instrumental that will make you feel like you’re at the same strip club them n***as from Belly went to. Anyway, Drake drops his toughest rhymes on this portion of the song, re-validating the gangsta card he received for his contributions on “I’m Upset.” (You know how you know Drake is rapping tough? He starts talking to himself on his lyrics and taking random breaths of air). Not to be outdone, After the 6 God’s part, Travis drops a quick verse in which he tries to match Drake’s heinousness, rapping slick and sly with auto-tune turned at it’s lowest level. Unfortunately, he didn’t beat him. Moral of the story, folks, never try to out-rap Drake on a song (Travis tried to sneak out-rap Drake).

Whenever The Weeknd and Travis Scott link up for a track, they are undefeated.

First and foremost, Travis Scott and the Weekend have great chemistry. I think they feed off of each other’s energy really well, and never step on each other’s toes when they collaborate. In “Wake Up,” they do just that (Or don’t do that… OK, I’m confused now), excelling at creating this smooth banger that doesn’t shy away from uncomfortable honesty.

As expected, The Weekend sets the tone for this track, giving us this passionate first verse that has a phenomenal melody and some pretty risky lyrics about this chick that he’s enamored with. From there, Travis Scott takes over, showing off the obsession he has with his own chick, harmonizing, but doing it in a way that sounds a lot less mushy. Eventually, the track turns into an all out crooner duel, as Travis does his best to reach vocal levels the Weekend can reach, failing successfully. At the end, The Weekend snatches the mic from Travis, ultimately showing him how a real singer sounds, giving the track a breakdown that was well needed. Moral of the story, never challenge the Weekend to a crooner battle.

This album is exactly what the hip hop game needs right now. It has club bangers, but club bangers that are tasteful and unique. It has tough ass records, but tough ass records that are actually meaningful and authentically gritty. It even has drug-talk, but drug-talk that doesn’t sound forced. Overall, it’s music that sounds great, but most importantly, organic.

I’ve always felt like Travis Scott was really good at collaborating with other artists. What he does well is cater to their strengths, plugging them into places that they can succeed and sorta blend in with all the other experimental s**t going on in the music. It’s something Kanye is really good at, which is one of the main reasons I see Travis as baby Kanye. With that being said, I thought Drake and The Weeknd put up phenomenal performances on their features, but don’t sleep on what Frank Ocean and Juice WRLD were able to do on their respective guest appearances.

Travis Scott has been a bit mute when it comes to talking about his personal life, and understandably so, he’s not quite wired like us decent human beings. But on this album, you do get a chance to hear him speak on topics such as his daughter, rise to fame, and relationship with Kylie Jenner. With his style of music already giving off this riveting feel, plugging in such discussions only adds to its intrigue, and this is one of the many reasons I think people will connect with this album more than any of his previous ones.

If Travis Scott is Michael Jordan to this album, the production is Scottie Pippen. Every beat had the same sorta feel, but somehow/someway, was unique in its own special way. I feel like all the beats were open to changing according to the many different moods Travis displayed, which tells me two things: He didn’t download them from SoundClick, and that he was heavily involved in the making of them.

So, the big question everybody will want to know is whether or not “Astroworld” lived up to the lofty expectations that was put on it; I think so. For 17 tracks, I entered into his complicated world, which means he accomplished at least one of his goals, right? But aside from that, the biggest reason I think this album was a success, was because I saw substantial growth from him on it. He never settled or relied on any present day sounds to carry him through, he just stuck to a sound that he’s been progressively growing and never looked back. In my book, that is the definition of an artist that has finally come into his own. Congratulations, Travis.