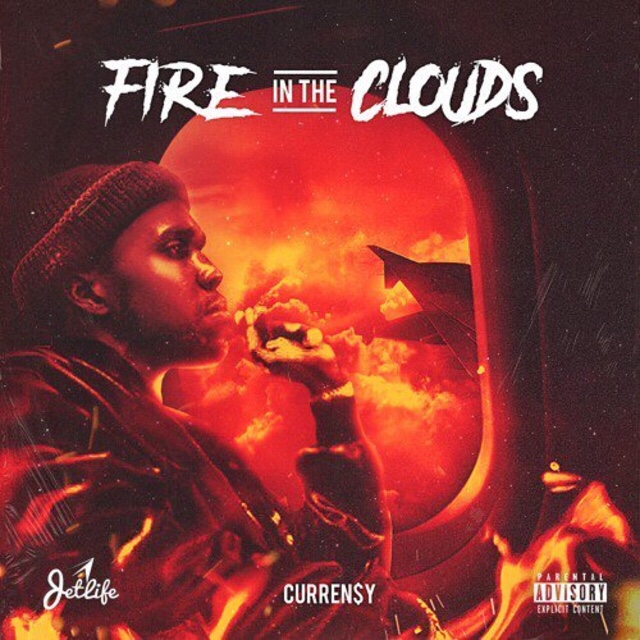 Curren$y has truly been on another level of focused as of late. I feel like he’s had this extra emphasis to drop some of his wisest bars to-date — something that has brought great solace to my heart. In “Fire In The Cloud,” I expect this new version of Curren$y to truly manifest itself for twelve tracks, separating himself from both the rest of the competition and his 9000 other mixtapes released in the last couple of months.

Powered by this droopy instrumental, Curren$y and featured artist Larry June go back and forth about their bossy lifestyles, doing their best to out-cool one another. Their demeanors are cold as hell throughout, as they bask in their playa-ways and money obsessions throughout.

This might be the first song that was recorded while sitting on a chair with a recliner.

Since “Bottom of The Bottle” featuring Lil Wayne, Curren$y and August Alsina came out, I’ve yet to hear anything remotely close to being a commercial hit for Spitta. If I were to guess, “This & That” is one of the closest things to it. On it, our hero raps with a pep to his step and dishes out lines that are both catchy and appealing. Aside from that, the instrumental he decided to rap over has this fast-paced/heavy-hitting sound to it that is infectious, while his talks about the luxurious things he has and doesn’t have in his possession is pretty intriguing to listen to.

Knowledge, knowledge and more knowledge is what you get on “300 Thousand.” On it, Curren$y talks about his rags to riches story with the listeners, specifically pointing out how he used to struggle back in the day, and how now, ballin’ out of the gym is all he’s been doing as of late. Interestingly, the tone of his voice on this song is pretty rugged, which tells me that he wanted to let the kids know that seeing success doesn’t mean you should let your foot off the gas.

Honestly, “Foreign Summers” is one of the low-key toughest tracks I’ve heard Curren$y make in his career. It features yet another vintage instrumental that is heavy on the percussions and bass booming side, while Curren$y boasts about living the good life, admiring his suited up car and lavish diamonds on his raps. It’s almost like listening to a boss who just got his bonus and couldn’t hold back being humble anymore.

T.Y. Is featured on this song, and honestly, he sounds nearly identical to Spitta. On his verse, he raps with the same laid-back demeanor, however, he’s slightly more gritty content-wise, as he issues threats of gunfire out and brags about smoking on some good good throughout.

“A Sign Of Things To Come” is as debonair-sounding as its title.

In this particular song, Curren$y takes his smooth s**t to the next level, linking up with Drupey Beats to create this sophisticated banger that I can easily see the trap’s version of Pink Panther rapping over. As for his bars, they continue to be half braggadocios/half humbling — a combination that at least keeps you feeling good about yourself after you listen to it.

I can say all these wonderful words about Curren$y’s rapping on this song, but honestly, the beat is what’s fire.

So here’s the thing: Curren$y’s music on this album isn’t the most exciting s**t since the emergence of sliced bread, and doesn’t feature even a semblance of trap vibes or mumble rapping, but something about it is intriguing to listen to. Never did I imagine I would enjoy hearing twelve records of a droopy rapper talk about his luxurious lifestyle over some snoozey instrumentals, but I did. You know how I viewed the album to enjoy it? I looked at it as the cliff notes version of a hip hop head honcho’s keys to success, and the lessons are so detail-oriented that you can’t help but soak it all in.

Rapping-wise, Curren$y and his few features really come with it. They are confident, braggadocios, focused, mellow, and most importantly, high-sounding. mechanically, they send body blows to whatever calming beat they are on, but do it in a way that sounds so damn stress-free. How were they able to do that?

My favorite part of this album is the beats. (Jesus, they were so good!) I felt like each of them had some sort of theatrical element to it, but also trunk-rattling vibes that brought nothing but solace. Kudos to Drupey Beats for dominating this section of the project.

Curren$y’s character continues to be one of the slyest of all time. It’s probably not going to lead to any grammys for him, but for the people who want to hear some s**t to calm their nerves, this project is magical.