Songs Of The Week 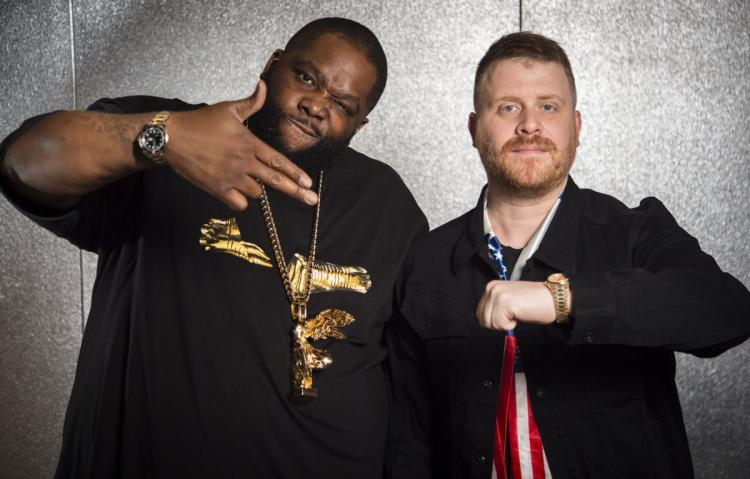 The best song and album from 6/2 – 6/8: Political music reigned supreme this week!

ALBUM OF THE WEEK: RUN THE JEWELS – RTJ4

Boy, did we need this Run The Jewels album in America right now! With so much unrest going on, I felt like it was important to listen to an album that is edgy, political, and downright angry (Let it all out, Americans). Aside from the vibes of the album, you gotta love how Killer Mike and El-P did everything in their power to create a body-of-work that sounded like some old school rap s**t. Salute to them!

ALBUM OF THE WEEK: FREDDIE GIBBS & THE ALCHEMIST – ALFREDO

Freddie Gibbs is on a hot streak. For many people, his Bandana album was the best of the year. Right now, I’m here to tell you that his Alfredo album is just as amazing as Bandana. On it, you get unbelievable beats by The Alchemist and bars by Freddie that straddle the line between gangsta and hood wise. If you aren’t hip to the album, get hip!

SONG OF THE WEEK: DIPLO, YOUNG THUG & THOMAS RHETT – DANCE WITH ME

This week, I was searching for music that would cheer me up a little. One of the feel-good songs that released this week was “Dance With Me.” On it, you get a beat that boasts vivacious vibes and performances by Thomas Rhett and Young Thug that are beyond infectious. All in all, this is the type of pop music I can f**k with!

ALBUM OF THE WEEK: POLO G – THE GOAT

I don’t love it when people call themselves “The GOAT.” With that being said, Polo G clearly comes across like someone who wants to be great on his album titled The GOAT. The verses he drops on it are passionate, the beats he raps over are riveting, and even his song titles are borderline legendary. If you didn’t walk away from that album feeling like the Chicago rapper has next, I don’t know what to tell ya…

SONG OF THE WEEK:  JOYNER LUCAS & WILL SMITH – WILL (REMIX)

Jesus, Will Smith went off on “Will (Remix).” When I first started listening to the song, I remember thinking to myself: Will just dropped a verse that exceeds his standards. When the song finished, I literally thought to myself that the Fresh Prince actor dropped one of the top 5 verses of 2020 (Walahi).

ALBUM OF THE WEEK: KEHLANI – IT WAS ALL GOOD UNTIL IT WASN’T

It Was All Good Until It Wasn’t is a very consistent album. On it, you get R&B jams that are unique, lyrics that are deep, and topics that you can both relate to and be entertained by. Kehlani will have your ears on a string from start to finish, but trust me, she’s far from a magician.

SONG OF THE WEEK: ARIANA GRANDE & JUSTIN BIEBER – STUCK WITH U

I think I appreciate beautiful music more than toxic music being in this pandemic that we are in. With that being said, “Stick With U” is an adorable song that has Justin Bieber and Ariana Grande sounding like two high school sweethearts that never felt love or each other. While Ariana slays the song with her amazing vocals, Justin slays it with his charm.

Ya’ll thought “GOOBA” was going to win song of the week, right? Nahhhhhh.

SONG OF THE WEEK: TREY SONGZ & SUMMER WALKER – BACK HOME

Man, during these trying times, I needed a feel-good song like “Back Home” in my life! On it, Trey Songz and Summer Walker gift us with succulent vocals and lyrics that are more optimistic than pessimistic (That’s saying a lot, because Summer Walker be complaining her butt off).

ALBUM OF THE WEEK: MOZZY – BEYOND BULLETPROOF

I know, Drake released Dark Night Demo Tapes last week, but I personally do not think it was as good as Mozzy’s Beyond Bulletproof album. While Drake’s album may have more hits than Mozzy’s, at the end of the day, the latter’s body-of-work felt a bit more complete, a bit more trill, a bit more unique, and a bit more meaningful.

“Sick & Tired” is a perfect emo-rap song. The energy you get on it is explosive, I love the passionate lyrics you get from both Machine Gun Kelly and Iann Dior, and even think Travis’ small contributions are tight. I have not a single bad thing to say about “Sick & Tired.”

I am a major emo-rap fan!

ALBUM OF THE WEEK: dvsn – A MUSE IN HER FEELINGS

dvsn switched their style up a bit on A Muse In Her Feelings, and came out winners! Don’t get me wrong, you still get tons of passion from the duo on the album, but you also get club bangers and some broody music, too (Ooh!).

SONG OF THE WEEK: KID CUDI – LEADER OF THE DELIQUENTS

ALBUM OF THE WEEK: TORY LANEZ – THE NEW TORONTO 3

I view Tory Lanez as a singer before a rapper. With that being said, he’s still a damn good rapper! On “The New Toronto 3,” Tory hits us with juicy lyrics, serious rap skills, and a level of arrogance that is stunning. If you call yourself a true hip-hop fan, you will absolutely love The New Toronto 3!

SONG OF THE WEEK: DABABY – FIND MY WAY

I get it, Drake released “Tootsie Slide” last week, but in my opinion, DaBaby had the better release. “Find My Way” is well-structured, features unique flows (Mind you, DaBaby rarely switches his flow up), and has vibes that are infectious. The music video to the song is also dope as s**t, to me.

ALBUM OF THE WEEK: THUNDERCAT – IT IS WHAT IT IS

It was a slow week for album releases. While Kiana Lede and Rod Wave dropped impressive debut albums, I thought Thundercat’s “It Is What It Is” album was more impressive. Not only did it feature authentic funk vibes, but it also featured music designed to calm the nerves of every person that is afraid COVID-19 is knocking on their door.

SONG OF THE WEEK: MOZZY & BLXST – I AIN’T PERFECT

It took me a while to start appreciating Mozzy’s music. On the real, I have always known that he can rap his ass off but wasn’t sure if he was capable of putting together a complete song. Well, after listening to “I Ain’t Perfect,” I can officially say that I am woke to Mozzy’s hit-making ways.

ALBUM OF THE WEEK: JESSIE REYEZ – BEFORE LOVE CAME TO KILL US

There’s been a bunch of albums that have tackled breakups in the last couple of months, but none has tackled it like BEFORE LOVE CAME TO KILL US does!

Jessie Reyez is one crazy-ass woman! Throughout BEFORE LOVE CAME TO KILL US, she basks in sounding like someone that has a screw loose lyrically. Not only does she play a jilted ex throughout the album, but she also comes across like someone that is more than willing to put a cap in a b*tch! On the flipside, Jessie sings fantastically on the album, as, throughout it, she switches between vintage and youthful singer, giving a young Amy Winehouse a run for her money. All in all, BEFORE LOVE TO CAME TO KILL US is raw, bluesy, timeless-sounding, and low-key tenacious.

There were some tough-ass bangers that released last week; the toughest was “Lotto” by Joyner Lucas.

“Lotto” features a beat that practically begs to be slayed and bars by Joyner Lucas that beg to be tested. The combination results in a banger that will have you motivated to kill whatever comes your way (Including the CoronaVirus).

ALBUM OF THE WEEK: JAY ELECTRONICA – A WRITTEN TESTIMONY

On some real s**t, I’m beyond baffled that there are people in this world that think “A Written Testimony” wasn’t that good… I get it, it’s technically a Jay Electronica project, but Jay-Z was all on it like he was Puff Daddy. But when it’s all said and done, the album features amazing raps, cinematic beats, and spoonfuls of the greatest rapper of all-time (How can you complain about that?)

I’m going to be completely honest with you, I’ve bumped “Oprah’s Bank Account” over 20 times this past week! I get it, Lil Yachty sounds like he’s on the verge of upchucking on it, but at the end of the day, you can’t deny the catchy hook and playful lyrics he drops in the song. As for Drake and DaBaby, they do what they traditionally do well on the song — the former gifts us with a nice little melody and softly-spoken lyrics, while the latter gifts us with an aggressive verse that has him talking about stealing our women and s**t (Ahhh, normalcy).

If I’m being completely honest with you, Jhene’s “Chilombo” was probably the best album that came out this week. But at the end of the day, no album pushed rap forward, had clubs jumping, sold more records, or was talked about more than “Eternal Atake.” All hail devil boy!

SONG OF THE WEEK: AMINE – SHIMMY

Aminé is a very heartwarming artist to listen to. However, in “Shimmy,” he shows the world his savage side.

Aminé’s performance on “Shimmy” is charismatic, gangsta, and timeless-sounding. If you were sleeping on him before, this song should wake your ass up!

ALBUM OF THE WEEK: LIL BABY – MY TURN

Lil Baby is an A-list rapper right now: He makes hits, he has a unique sound, and most importantly, he makes really good albums. My Turn, his latest album, is really f**king good! Not only does Baby fork out tons of explosive hits on it, but he also finds ways to turn everyday trap stories into some cinematic s**t.

Categories: Songs Of The Week