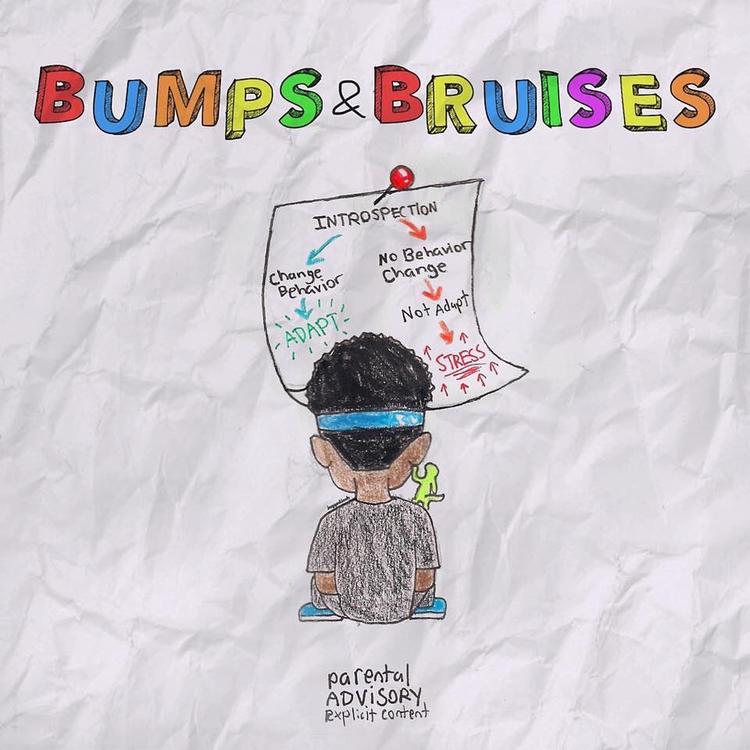 Late last year, after listening to “Imma Dog,” I realized that Ugly God was actually an artist that I can take seriously. With the release of “Bumps & Bruises,” his debut album, the Texas rapper continues to tease us with his low-key potential, blessing us with fourteen short, but sweet tracks that features catchy hooks, carefree sentiments, and surprisingly, tough ass bars.

In “What’s Up,” Ugly God wants nothing but smoke from foes and women all over.

Throughout “What’s Up,” all you hear is rowdiness, as Ugly God boisterously calls out n***as in the club, and even more importantly, seeks booty like a barbarian. While our hero will probably have you a bit taken aback by his explosiveness, I think it’s impossible to not end up hypnotized by the track’s Three Six Mafia-like vibes, hook and instrumental.

“One Two” is a bit corny on the hook (It steals from Freddy Krueger’s “1, 2, Freddy’s Coming For You” anthem from back in the day), but once you shove that aspect of the song aside, what you end up with is a tough ass banger that has Ugly God relentlessly putting his competition in their places through gangsta bars.

With this song being an intro, I thought it served as a great reminder of how savage Ugly God can be.

3. BACK TO THE BASICS

Much like “For Real,” “Back to The Basics” has a very smooth tone to it, even though Ugly God’s lyrics are savage as s**t on it.

I can see K. Camp making a song like this.

I understand, “Hahaha!” has the name of a horrible song, but on the real, it’s not! In my opinion, the song is slick, it’s catchy, it’s trill, and most importantly, Ugly God shows us the same charisma he showed us on his smash hit from back in the day titled “Water” on it. Personally, I think fair-weather and die-hard Ugly God fans will like this song a lot.

Doesn’t this song sound like a remix to French Montana’s “Marble Floors” track from back in the day?

“Batman” is one of the few songs on this album that sounds complete. On it, Ugly God brags about whooping ass and getting guap with the best of them (My n***a!).

What makes “Batman” special is that it has plenty of trill energy attached to it, as on it, Ugly God spits tenaciously over this hard-hitting Tay Keith-produced instrumental. Aside from that, the hook Mr. God was able to deliver on the track was damn-there flawless, to me, as it blended catchiness with gangstaness (I am aware that both of those words aren’t real words).

There’s no way a n***a named ‘Ugly God’ can call himself Batman.

Ugly God has an atrocious name, but he’s not that bad of an artist… On the real, the “Water” creator is comfortable in his own skin, even though that skin of his is reckless and carefree. In “Bumps & Bruises,” Ugly God spits ferociously over both explosive and chill instrumentals, playing enemy to his foes, and role model to up-and-coming assholes.

You know what’s interesting about Ugly God? He’s a pretty solid rapper! (He rides beats well and has great confidence) However, the one thing I dislike about his artistry is the lack of topics he covers. Every single track on “Bumps & Bruises” revolved around either f**king b*tches, shooting up ops, or ballin’. Ugly God never really dove deep into his introspective side, so I can honestly say I learned nothing positive listening to this album. With that being said, not every album should be about learning something positive, so if you are down for partying and bulls**t, this s**t’s for you!

My favorite aspect about “Bumps & Bruises” is the production. I thought Ugly God chose some pretty dope trap instrumentals to rap over. Overall, when you compile all the beats you heard on this album together, what you get is something that is very consistent/dynamic-sounding.

Ugly God is not the greatest rapper of all time, and I’m sure he doesn’t care to be. With that being said, never take “Bumps & Bruises” seriously, because I’m not too sure Ugly God takes HIMSELF seriously.