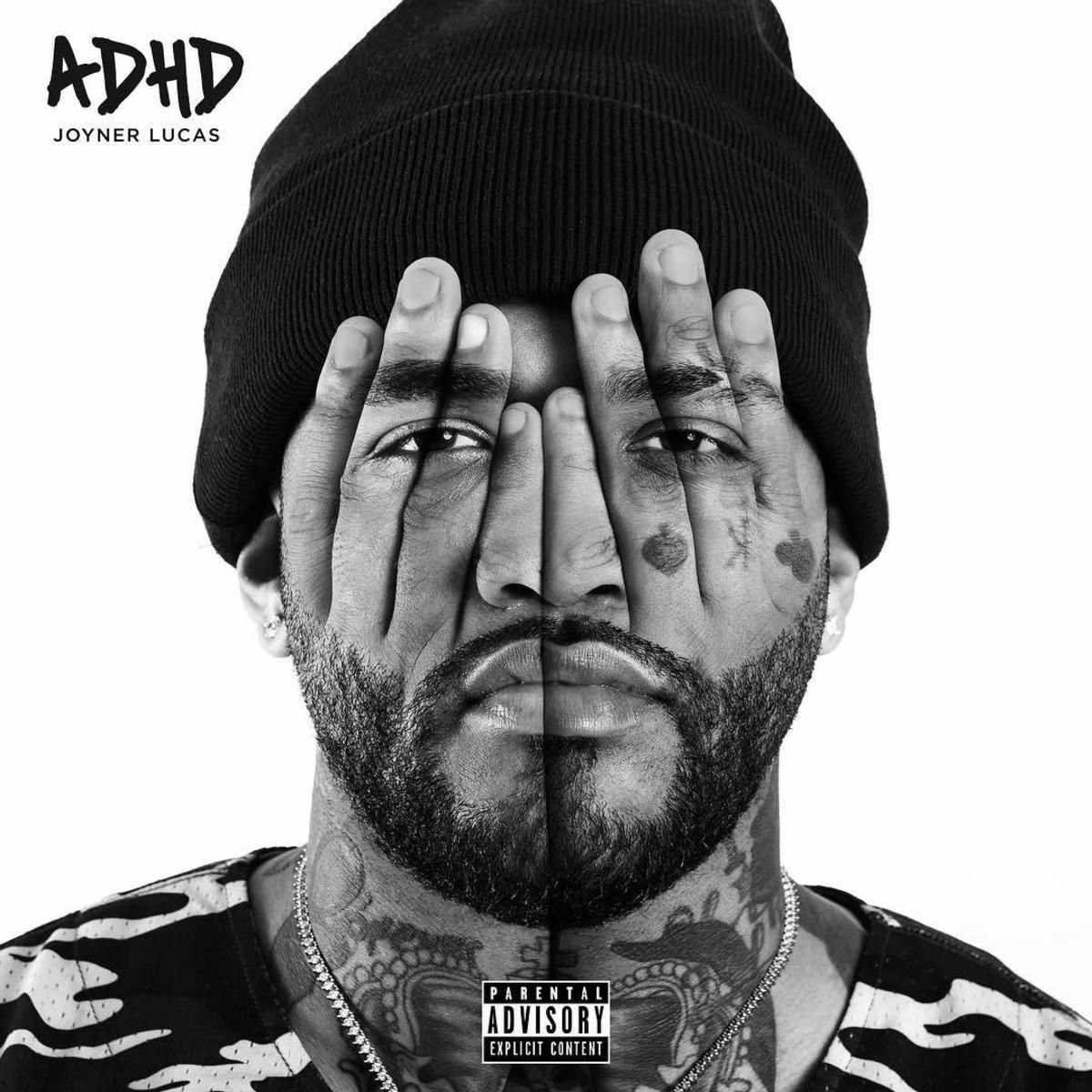 “I Lied” is very important to the grand scheme of ADHD. With the track following a very emotional skit in “Screening Evaluation,” on it, Joyner raps explosively about his rough come-up and the effect money has had on him throughout the years.

While you’re going to love the abominable flows that Lucas raps with on “I Lied (Intro),” you can’t ignore the raw emotions he displays on the song.

“I Love” is Joyner Lucas’ theme song. On it, the Worcester rapper drops off a very melodic/infectious hook, flows that range from fast to slow, and most importantly, lots of competitive lyrics aimed at his competition. As a club-banger, I think you will love the song; as a lyrical banger, well, I think you will love the song! (Lucas combined the best of both worlds on this song)

“Broke and Stupid” is kinda like an exhibition for Joyner Lucas. On it, he hurls out bars utilizing a consistent flow, touches on powerful topics such as overcoming hate and embracing change, and most importantly, spits with this level of electricity that is just as impressive as it is infectious.

Why the hell is “Dear Summer” on Memphis Bleek’s 534 album? (Jay must’ve thought the song was garbage)

Joyner Lucas is a helluva rapper. When he gets passionate about a particular topic, he is capable of being an all-time great rapper! With that being said, on “Devil’s Work,” Lucas puts up one of his best rap performances yet!

Over this beat that sounds like a combination of some ‘Meek Mill intro’ and ‘black movie where the protagonist finds out his homie just got shot up’ s**t, Joyner lets his heart bleed, pleading with the LORD to bring back fallen soldiers like XXXTENTACION, Nipsey Hussle and Aaliyah and take individuals like R. Kelly, Tami Lahren, and Donald Trump. While the subject-matter behind the song is a bit wicked, I can’t help but be impressed with how focused Joyner’s bars, flows, and sentiments are on it.

On some real s**t, wishing death on people (Even if you don’t like them) isn’t the way to go, Joyner… How about you wish food poisoning on them instead?

Typically, Joyner Lucas dishes out both wise and rugged lyrics in his music; on “Lotto,” he only gifts us with rugged lyrics, as, throughout the song, he brags about plowing women, having shooters, and being the man in his city.

As expected, Lucas spits his bars with a style of rapping that is confident as hell on “Lotto.” After you are finished listening to the song, you’re going to be convinced that he is one intimidating mulatto!

Do you know what I love about Joyner Lucas? He wears his heart on his sleeve. Not only does he spit like his life depends on it in his music, but he also tackles topics that are sensitive to him every chance he gets. With that being said, ADHD is a body-of-work that is passionate, raw, tenacious, and hella eye-opening.

Joyner Lucas is a clever, explosive, and concise rapper. When he creates a song, he makes sure you feel and hear every bar he spits. Throughout ADHD, you can tell that the 31-year-old rapper knew he had our ears on a string, as, from start to finish, he puts extra emphasis on controversial lyrics on the album. Does he force s**t at times? I think so, but at the end of the day, you have to respect his fearlessness when it comes to keeping it real.

I thought the hooks on ADHD were pretty solid. Don’t get me wrong, I hate it when Joyner tries to do his best impersonation of Gunna on a song (Like he tries to do on “Gold Mine”), but I do love the fact that he isn’t scared to turn into a fearless singer from time to time. I also thought Joyner did a great job of feeling s**t out from song to song on the album. If a beat he was handed sounded emotional, he did a great job of sounding emotional; if a beat was hard-hitting, he did a great job of turning up the heat vocally. (BTW, the beats on ADHD are amazing! A bunch had rivetting vibes attached to it, while others were simply put on this earth to f**k up housing foundations)

I’m so glad that Joyner didn’t fill ADHD with a bunch of features. With that being said, I enjoyed the skits by Chris Tucker and Kevin Hart more than the guest appearances by Young Thug, Chris Brown, and Fabolous. Don’t get me wrong, I thought each artist did a great job of giving the album some unique flair, but at the end of the day, Joyner’s chemistry with them on the songs they were on felt shaky.

I get it, it took Joyner Lucas 100 years to finally drop ADHD, but If you think about it, it probably took him that long to release the album because he wanted to give us something great. ADHD is not a great album, but it’s definitely better than a bunch of other debut albums I’ve heard in the last couple of years.