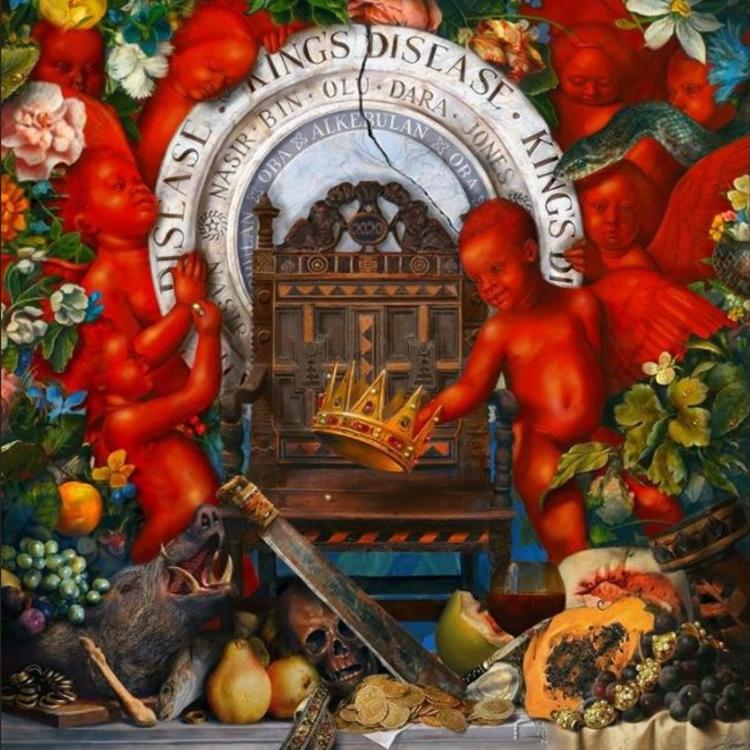 After a two-year absence, Nas returns with “King’s Disease”

Nas holds nothing back on “27 Summers.”

I feel like Nas swags his way to the finish line of “27 Summers.” Throughout the song, he hurls out bars about his luxurious lifestyle, his famous friends, his kush addiction, and his love for everything black utilizing an effortless style of rapping.

I don’t love how “The Cure” begins, but I absolutely love how it ends!

I don’t know what I love more: The tough-ass beats that powers “The Cure” or Nas’ gritty-ass demeanor on the song. Whatever the case may be, when you combine the two, what you end up getting is a hit that is supposed to hype bosses up, invigorate shooters, and big-up day ones.

Nas isn’t rapping on “The Cure;” he’s teaching a class on realness.

Nas and Lil Durk’s unique styles mesh well on “Til The War Is Won.”

“Til The War Is Won” is probably the most important song on King’s Disease. On it, both Nas and Lil Durk rap about the importance of protecting, helping, and motivating our women. They also promote forgiveness and denounce black on black violence. While Nas raps rawly on the song, Lil Durk sings fearlessly.

I love how Nas connects with younger rappers.

I grew up listening to 90s rap, so I had to put “Full Circle” on this list!

I feel like The Firm could’ve been one of the greatest rap groups of all-time if they stayed together long enough. Their chemistry was amazing and each rapper was in their prime at the time their first album came out. 24 years after their creation, the Firm decided to reunite for “Full Circle.”

Did Dr. Dre hit us with bars at the end of “Full Circle?” If that’s him, he sounds very rusty…

I can see “Replace Me” being a commercial hit. At the same time, I think the song will be beloved by gangstas that can appreciate a smooth street banger.

On “Replace Me,” Don Tolliver, Nas, and Big Sean play slick-ass lovers that know exactly what to say to a woman that might have trust issues. While Tolliver gifts us with a hook that sounds highly infectious, Nas and Sean gift us with raps that are delivered slyly.

If Nas isn’t on your top 10 rappers list, I don’t respect your list. Since he dropped Illmatic, he has found a way to remain relevant by releasing music that is both meaningful and thought-provoking. On King’s Disease, Nas doesn’t only do what he does best, but also blesses us with music that all-kinds of hip-hop fans will love.

I will be remiss if I didn’t mention how great the beats are on King’s Disease. Some beats are multi-faceted, some beats gave off old school vibes, some beats gave off legendary vibes, and some beats did everything in its power to knock pictures off of walls. Though Nas put up fantastic rap performances on the album, kudos must go to Hit-Boy for blessing us with pure heat production-wise.

Nas sounds just as crisp as he did 20 years ago on King’s Disease. Throughout the album, he’s gassed up, he rides beats well, and he blesses us with content that is hood-certified in every kind of way. Nas also adjusts really well to the many different types of beats that get thrown his way. On the real, after listening to King’s Disease, I’m ready to call the New York rapper immortal.

Nas’ style meshes really well with the guest features on King’s Disease. Not only did he sound like he was on the same page lyrically with every single person on the album, but he also made sure to stay true to himself stylistically while letting his guests shine by doing what they do best. Way to take a backseat but still poke out like Kim Kardashian’s booty at a local library on the album, Nas!

King’s Disease is a fantastic album. You don’t have to be an old head, a millionaire, a rap fan, or a former drug-dealer to enjoy it; you simply have to appreciate good music.