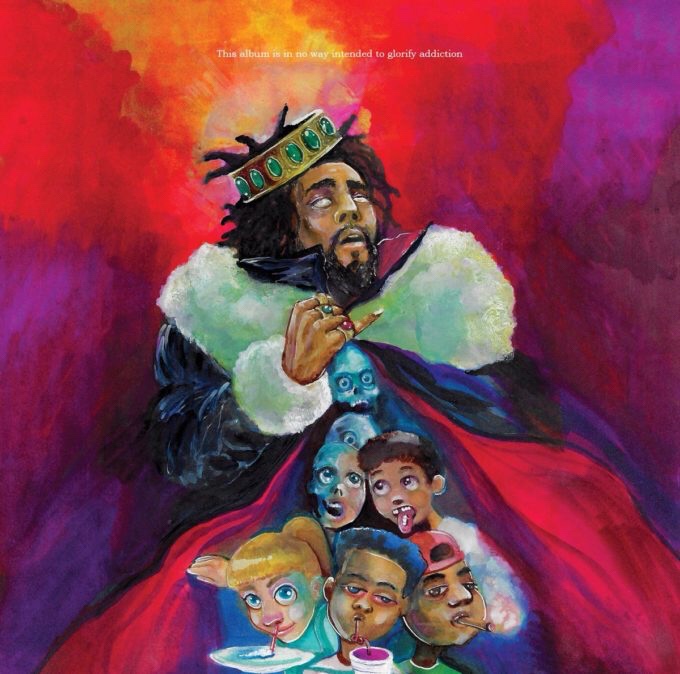 It’s Saturday afternoon, I’m in the hospital with my brother because his wife just gave birth, and the NBA Playoffs are set to begin with a match-up between the San Antonio Spurs and the Golden State Warriors. After getting past all the analysis from the commentators, the intro to the game finally emerges. On it, we get a chance to see some of the best plays from this years NBA season, narrated by a riveting verse from J. Cole. For me, hearing this version of Cole for even 45 seconds was a pleasant surprise, because I feel like this version of Cole was missing the last couple of albums. Sure, his feature on “Boblo Boat” with Royce Da 5’9 was absolute flames, but think back to his music from “For Your Eyes Only” — It wasn’t as lyrical as his past first few projects (Mind you, he had a song about folding clothes on that album). For “KOD” (An album with a cover that features our hero with a crown on his head and a bunch of kids beneath him that are clearly indulging in the toxins that hip hop artists promote today), I expect a fiery Cole (aka Playoff Cole) to show his face, putting his oddball competition in place while entertaining true hip hop fans everywhere.

Lets be real, the flow Cole is rapping with on this song is what makes it special. Throughout, he spits with such a good rhythm, never slipping up a single moment. At the same time, I feel like Cole also sprinkles in some appealing bars on his verses, sticking his chest out like he just made an “AND 1” in a nail-biting road playoff game.

There are so many quotables on this song, and they are delivered so effortlessly. This reminds me just how easy this Rap s**t comes to him.

“The Cut Off” has this old school vibe to it, as Cole discusses his willingness to alienate himself from a couple of his problematic homies from the past. Throughout the track, he sounds convinced that doing this is the right decision, but eventually stumbles, falling prey to the troublesome temptations that comes with being around them.

Ironically, this song is very soothing to me. It utilizes these calming piano notes and consistent percussions throughout that are therapeutic to my ears. In my opinion, it’s the type of song that is perfect for a small little concert at your local Bus Boys and Poets. (Probably an empty one, because no one knows who the f**k kILL Edward is!)

“KOD” has Cole spitting with the same flair as all of your favorite rappers in the game right now: I’m talking Blocboy JB, Lil Xan and even Kendrick Lamar. I would expect such thievery from The Game, but not from you, Cole!

While I think this song is definitely a banger, I do have this feeling that Cole is trying to make a mockery of us simple-minded rap fans throughout it. For the people that do not think he’s trying to do that, enjoy it for its unique flows, heavy-hitting beat and catchy hook. For the people that can’t look past his perceived bashful behavior, make sure you ask him who the f**k he thinks he is for being so goddamn sarcastic about the music of today.

I love how Cole lets the world know that he’s back and ready to kick some ass on his first verse, but goes on a tangent about a bunch of pointless s**t on his second verse. It’s obvious that both the regular version of himself and the Lil Yachty version of himself are at war with one another, and the prize to be won is rap supremacy. I say both sides need Jesus.

“Photograph” falls in line with the “Dreams” and the “De-ja Vus” of the world. On it, Cole gets obsessive with what he considers his dream girl over this gloomy instrumental. When it comes to artistry, this is the Cole that I expected to hear throughout his career — One that can give us an infectious melody, calculated bars, and this awkwardness that resonates with us all because we were all awkward at one point of our lives.

I can sympathize with what Cole is going through on this song… One day I saw a picture of a Big Mac with bacon on it, and damn there s**ted my pants at what such savoriness can mean for my taste buds.

Can you believe this is an outro? I feel like it’s better than 99% of the s** t Smokepurpp has dropped this year.

Cole absolutely pours his heart out on this song. On the hook, he delivers something that is very melodic, giving thanks to the man upstairs while fighting to truly understand what it takes for him to be happy in life. As for his verses, he shows a bit of frustration, outlining the careless things he has seen the people around him do throughout the years. Overall, I like the storytelling approach he uses throughout, as he paints this vivid picture of the Ville that may look similar to your nearby projects.

I think it’s pretty obvious that “KOD” has a tone to it that is different from Cole’s previous albums.  The production is mellow, a bit drowsy, and very simplistic. At times, Cole does give in to the vibes of the production, harmonizing and delivering a few sentimental lines here and there, but for the most part, “KOD” is all about its message(s). Cole’s message(s) mainly revolve around the disappointment he has with a couple of bad seeds he’s either run into or seen in the urban culture today. In typical Cole fashion, he doesn’t always attack the hot topic head on in this album, at times making a mockery of it by using the youth’s words and actions against them by aimlessly plugging it into his raps. In the songs that he doesn’t use this approach, he goes Trump Twitter account on folks, showing little to no restraint when it comes to telling it how it is. If you ask me, mixing the two styles on this album makes for an interesting concoction.

I’ll be honest with you: Listening to this album made me miss the days when Cole simply rapped. Don’t get me wrong, a few of the songs on this album contained a version of Cole that was fiery and ready to gnaw a rapper’s head off, but for the most part, I feel like he was focused on trying to shove knowledge and wisdom down our throats as opposed to giving us something in line with his musical peak. It’s almost like Cole’s aim was to make an album that the urban media would want to punch in its face, and I’ll be the first to tell you that it crossed my mind at least 7 times while listening to it. But that means his message was effective, right? Before he can get back to feeling free on the mic, he has to play savior to a genre that many perceive as deteriorating. Like many, I am guilty of turning a blind eye to the recklessness that rap has become from time to time, and Cole made sure I was veered back on course by dropping this album. It was a good ole ‘slap in the face’ to wake me up from my lean coma. Job well done, sir!