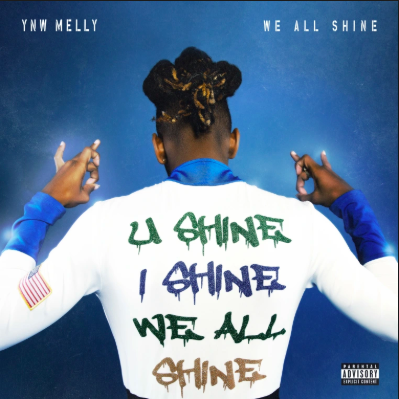 Does YNW Melly actually shine in his sophomore mixtape “We All Shine?” We let you know below for free-99!

“Never let her f*ck with my keys/Cause all of my n*ggas some kings.” I can get behind sentiments like that!

“Why You Gotta Walk Like That” is fairly short compared to the other tracks on the album, but the beat is infectious, and I haven’t really heard YNW Melly get the space and opportunity to talk his sh*t. These are the reasons it crawled its way to the number 5 spot.

I’m always here for a good Kanye feature. Although this song is mostly sung, I think it’s pretty clear that this was the standout single for the album. On it, we can hear YNW Melly battle some complex emotions, as we all do as humans. It’s relatable, but I would’ve liked to see Kanye more involved on it.

This song should resonate with anyone who has suffered through a really bad heartbreak. The first few bars on YNW’s verse are, “So heartless, b*tch, i hate you/I can’t believe you did me,” as he tells the person that broke his heart that he’s gonna break hers into centimeters. The melodies, the catchy hook, the savagery, and the smooth instrumental make for a perfect match here.

YNW Melly gives his all on this song, as he moans and groans at the mic.

I should have made this 1b, because its tied with “City Girls” for my favorite song off this album. YNW Melly is able to fold some real sh*t into a song based off melodies and a catchy beat on it.

“I don’t want to take no losses, so I play it all for keeps/And my heart can’t take no more of all this pain attacking me.” That’s some real sh*t. “I been through a lot of sh*t, yes, I done seen some crazy things/Every time I go to sleep I got some demons chasing me.” Some more real sh*t, and thats’ just in the hook/bridge. On top of that, Fredo Bang’s small feature is a nice touch to break off the monotony of the song. I find myself constantly going back to this track.

In most cases when the intro to an album is number 1 in your top 5, it’s a bad sign, but “City Girls” is really good. YNW Melly proves off the rip that he’s able to straight murder melodies. I feel like Melly shines the most when he’s on a song by himself, and after the first few listens, I found myself humming along with the hook. In a way, “City Girls” sets the pace and tone for the rest of the album.

You have probably heard or have come across the name YNW Melly before, but weren’t able to put a face to it. Hell, I’m sure you have heard “I wake up in the morning, I got murder on my mind/AK-47’s, MAC-11, Glocks and 9s….I got murder on my mind, I got murder on my mind” from “Murder On My Mind,” or even “White coupe, butter pecan/Thick bitch, Puerto Rican” from “Butter Pecan.” With all that being said, I’m sure you’ve asked yourself, “why should I even give a f*ck about this album?” and I’ll tell you why: First and foremost, you need to understand that YNW Melly is only 19 years old (young af right?), so the music he creates is made for a younger generation (duh). Once you get past that, on some songs you’ll see that YNW Melly has an uncanny ability to put his pain and strife into amazing rap ballads. For example, I’m not sure if YNW Melly has addressed these incidents in any interviews, but the inspiration for “Murder on My Mind” was a deadly drive by shooting that resulted in the death of two of his life-long friends that took place in South Florida. See? The song makes more sense and resonates differently. His music has heart.

While, for me, this album isn’t full of game-changing or ground-breaking music, it also isn’t terrible. There were 7 to 8 solid/good songs out of 16 in total, which in perspective, isn’t that bad. Granted, there are some points throughout the album where the music is hit or miss, and the lyrics become really basic, but it is what it is when we’re discussing artists from the younger generation. I also believe YNW Melly struggled a little to recreate the same magic of “Murder on My Mind” on this album.  That’s not to say YNW Melly doesn’t have moments on it, but they are reduced to just that: moments… Sophomore slump, maybe?