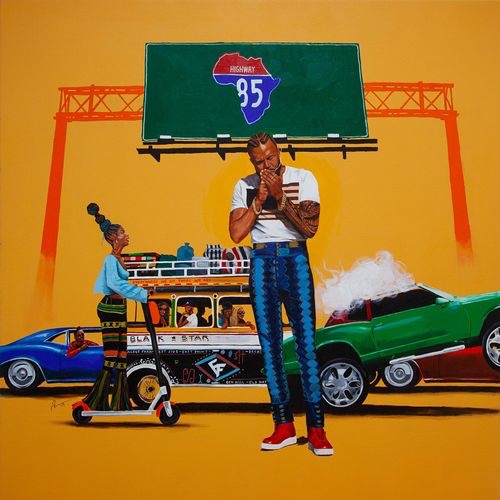 After moving to Africa following an eviction from his Atlanta home, Jidenna returns to his roots musically in “85 To Africa.”

After a pretty soulful intro, “The Other Half” gets real! What it transitions into is this hard-hitting track that features nothing but gritty ass bars by Jidenna in which he lets the world know how strong of a mental he has these days. Unexpectedly to some, ‘Denna kills s**t, effortlessly flowing with the best of them. Oooh, who knew ‘Denna had some kill-a-rapper in him?!

“The Other Half” is colder than some chicken that lives in a household without a microwave.

“Sufi Woman” has a great rhythm attached to it, an unbelievable melody, and plenty of sultry lyrics. Additionally, the track blends this old school afropop sound with bluesy vibes. As a fellow Naija man, I danced confidently and effortlessly to the track, enjoying myself the whole time.

Where can I get myself a ‘Sufi Woman?’ I need someone to help me finish this big ass Margarita I have laying on my desk.

While my favorite song from ‘Denna will always be “Little Bit” (A cultural jam I thought made Nigerians like myself proud), this particular song takes on more of a traditional hip-hop tone to it, as Jidenna spits tough as hell (But still melodically) over this trill instrumental. While I can get behind the message of unity and sticking up for your people this song gives off, I can’t get with ‘Denna sounding like a carbon f**king copy of 2017 Ty Dolla $ign (N***as need to stop copying that dude so much).

If you ignore the copycatting by Jidenna on this song, it’s actually pretty solid!

in “Sou Sou,” Jidenna delivers something that is both trill and motherland-approved, as on it, he blends together Nigerian swag with akata swag.

On the real, I think you will love the way “Sou Sou” cooks up, as it encourages unbalanced dancing throughout (You gotta use nothing but your pelvis to properly dance to this joint).

There’s no f**king way “Zodi” was not going to win number 1 on my top 5 list for this album!

“Zodi” is powered by this Afrobeats version of Busta Rhymes’ “Put Your Hands Where My Eyes Can See” instrumental. Over this instrumental, Jidenna and featured guest Mr. Eazi sing about a girl that doesn’t quite understand how much her man wants to love her. As expected, “Zodi” is full of ass-shaking vibes and Naija accents, in addition to infectious hooks and lovely melodies. The only thing that can beat a combination like that is the ’96 Bulls!

I am someone that is very happy that Jidenna has been able to sort-of rediscover himself as an artist with this album (I know you’re waiting for a “but”). I am also happy that Jidenna didn’t completely abandon his hip-hop roots in the process of rediscovering himself (Still waiting for that “but,” right?). But (THERE IT GOES!), there’s a level of deception I still feel when I listen to his music… You know what, how bout we do this: Below, I’ll highlight the good, the bad, and the unauthentic I hear on this album.

THE GOOD: Jidenna’s ear for music is outstanding! Yes, he can nail a great melody and has the voice of a male angel, but it’s his ability to tap into timeless (I’m talking ’50s timeless) sounds that absolutely blows me away! In “85 To Africa,” there are plenty of times that Jidenna secretly plugs in vintage elements into the grand scheme of things, making an ordinary hip-hop/afrobeats song sound almost Great Gatsby-like.

THE GOOD: I love the Afrobeats songs on this album at face value. They are fun, infectious, and most importantly, soothing. Jidenna speaks and sings like a true Naija man on these songs, nailing the accent and broken-English. He also tip-toes love/love-making just as good as your average Naija artist on a few songs — an approach I really liked (Nigerians are really sneaky with their sex-talk in music).

THE GOOD: Jidenna is a helluva rapper! He has the swagger, the flows, the punchlines, the confidence, and the topics of a top MC, to me. In songs like “The Other Half” and “85 To Africa,” I thought he put up excellent rap performances.

THE UNAUTHENTIC: On the real, my only complaint is that Jidenna seems lost as an artist on this album. Since listening to his debut album in 2017, I’ve felt like he had identity issues as an artist. Those identity issues continue, even though he says he’s found himself after moving to Africa. Throughout “85 To Africa,” there are way too many Drake-sounding moments for my liking, in addition to forced spurts of trillness. It’s almost like Jidenna has to prove he’s hard or African at times, and on the real, it disrupts the naturalness of his music.

Jidenna is hella talented (You’re waiting for a “but” again, right?). “85 To Africa” is a good album (Wait for it…). As Jidenna continues to eat real-deal Jolloff down there in Nigeria, I pray that he truly finds the correct balance between his old and new self in his music (He didn’t quite nail it like I wanted him to on this album… There you go, I guess there goes the “but”).