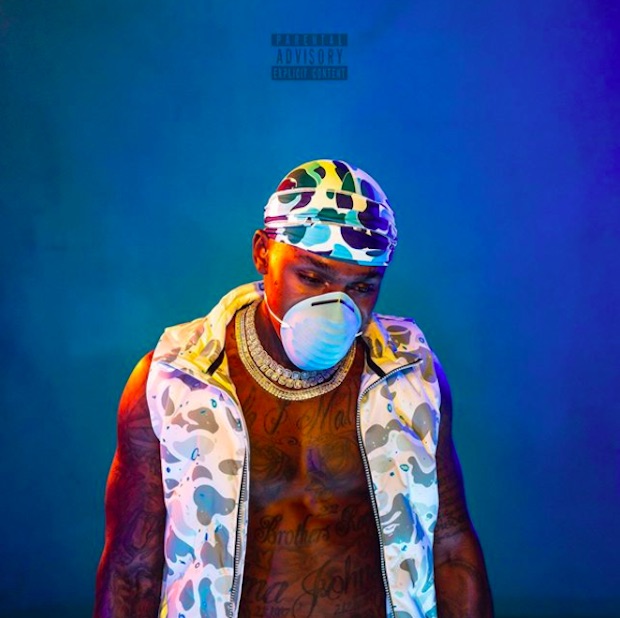 Though it sucks that Ashanti gives us a recycled hook on “NASTY,” you can’t ignore the passion she shows on the track. You also can’t ignore both DaBaby and Megan Thee Stallion’s brash, pornhub-Esque, fast-paced, and raunchy verses.

Ashanti is always on some recycling s**t when she features on someone’s song these days… Can someone let her do some original s**t for once?

DaBaby is hella amped up on “CHAMPION.”

There isn’t a better feeling than accomplishing a goal. For DaBaby, a dude that seemingly came out of nowhere, selling tons of records has to feel like a major accomplishment. On “CHAMPION,” the North Carolina rapper exuberantly reminds the world how much he has hustled, betted on himself, and put trust in his friends throughout the years. Though he doesn’t put up his most amazing rapping/singing performance on the song, at the end of the day, you have to love the emotion he shows.

Though DaBaby doesn’t really switch up his style on “LIGHTSKIN SH*T,” everything around him is unique.

“LIGHTSKIN SH*T” is on some trap-EDM s**t. Not only is the song powered by this beat that boasts nothing but futuristic vibes, but you also get a verse by Future that straddles the line between rugged and melodic. As for DaBaby, he shines on”LIGHTSKIN S**T by fitting out. You’ll love how he approaches the song with the same level of aggression he approached “Suge” with.

DaBaby dramatically switches his flow up on “FIND MY WAY.” (2020 has been so f**king weird)

“FIND MY WAY” boasts this serene beat that has some serious bass attached to it. Over it, DaBaby raps dynamically, sings melodically and hurls out lyrics that are both gritty and hood romantic. Below are some of the things he says in the song:

‘Cause I been busy catchin’ them blessings I used to pray for (Let’s go)
Stackin’ up the backend like Tetris, we playin’ Legos
And every day I pray to God that a nigga don’t try to play, though
‘Cause I don’t like to play, be done gave a nigga a halo (Boom, boom, boom)
Thinkin’ ’bout the people I lost, know I got some angels
Chillin’ with my freak, when we fuckin’, it ease my anger
I’m takin’ selfies with my bitch, she keep switchin’ up different angles
And no, I never kept a bitch, but I always keep me a banger (Boom, boom, boom)

In my opinion, “FIND MY WAY” is one of DaBaby’s most dynamic songs-to-date.

DaBaby and Roddy Ricch are two of raps biggest artists right now. On “ROCKSTAR,” they prove to the world that fame hasn’t changed them a single bit.

“ROCKSTAR” is beyond hood emotional. For starters, the track is powered by this smooth-ass beat that has a helluva bop attached to it (Do you notice a theme yet?). Over it, DaBaby and Roddy talk about keeping guns on them, sippin on codeine, protecting family, and dodging ops. While the former switches between gritty rapper and soulful singer on the song, the latter sounds like he’s suffering from COVID-19 symptoms.

DaBaby talks about killing someone in front of his daughter in this song… Welp, I won’t say another bad thing about dude after this sentence.

You can’t hate on DaBaby’s work ethic. In less than two years, he has dropped three studio albums. With that being said, his style is starting to get stale. On Blame It On Baby, DaBaby doesn’t switch up his flow all that much, but he does experiment with different kinds of beats and melodies.

I am undecided on whether or not DaBaby is a good rapper. While he has outstanding confidence, I do wish he wouldn’t resort to talking about f**king b*tches, balling and shooting people so much in his raps. Nonetheless, throughout Blame It On Baby, DaBaby entertains (Not satisfies) by being both messy and trill lyrically, and by switching between gritty and melodic rapping-wise. (Hey, I am OK with being entertained)

The production is easily the best thing about Blame It On Baby. Producers like London On Da Beat, DJ Kid, and Wheezy must’ve known that DaBaby needed a change of scenery because they gifted him with beats that didn’t rely on bass as much (They had bass, but didn’t rely on them), beats that were smooth, and beats that changed faces more than Renee Zellwegger. Kudos must also go to DaBaby for not being afraid to try new s**t out.

I thought the guest appearances on Blame It On Baby were OK. To me, Roddy Ricch killed his verse on “ROCKSTAR,” YoungBoy Never Broke Again killed his verse on “JUMP,” Future was really good on “LIGHT SKIN SH*T,” Quavo was solid on “PICK UP,” and Ashanti stole the show on “NASTY.” As for Megan Thee Stallion and A Boogie Wit Da Hoodie, I completely forgot they were on the album.

I’m not going to lie, I thought DaBaby would be one of those rappers that would be irrelevant in a year. After listening to Blame It On Baby, I am convinced that he is a rapper that is willing to do whatever it takes to prove to the world that he truly has talent; you can’t underestimate people like that.

7 thoughts on “DaBaby – Blame It On Baby (Album Review)”