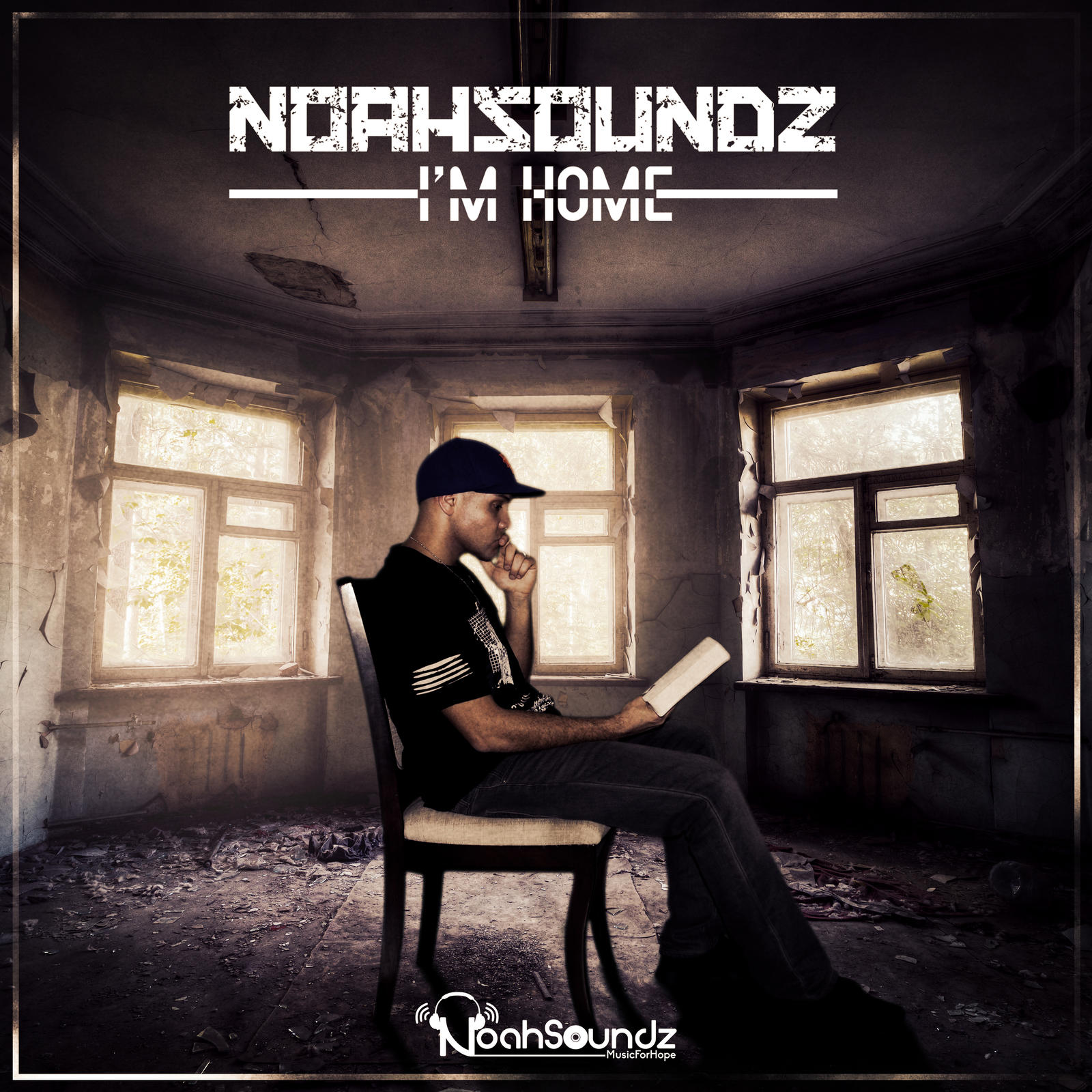 NoahSoundz is a Christian rapper from Brooklyn, NY that loves to blend many different sounds together to create this picture perfect rap canvas for his fans. With his new album ‘I’m Home’, Noah shines brighter than ever, compiling a group of songs that show his ability to deliver wise words through some very colorful bars.

‘Journey’ is the first song on the album, and its the perfect tone setter for it.

Over this enthralling beat, Noah raps heinously, talking about his journey and how he’s gotten to where he is now. You can hear the determination and focus from the Brooklyn rapper on each line he drops, as he gets a bit lost in the emotions of the beat.

‘I’m Home’ is that powerful track that NoahSoundz is more than capable of making.

The hook is laid down tremendously, giving off this passionate sound that is the perfect setup for Noah to speak truthful words on his verses. If you’re not inspired after hearing the chorus, I got some spare Q-Tips I can let you borrow.

Noah hammers down his lyrics in the most relentless way on the verses, dropping heavy hitting bars one after another. Subjectt-wise, Noah shows how thankful he is for the LORD’s blessings, outlining how he’s found his way in life through his guidance. There is no doubt that the words that Noah is spewing is coming from the heart, because I feel like you can hear the blood, sweat, and tears in his voice.

‘Take Me Away’ is a heartfelt track by Noah in which he decides to do some storytelling about a group of lost individuals that needed guidance in their upbringing. The lyrics that Noah drops are vivid, his delivery is complex, and his wordplay is spot on.

I really enjoy the cinematic sound this song has! I can easily see this song serving as the soundtrack for a dramatic movie.

‘Son Rise’ is a beautiful dedication by Noah to his son, as he recalls the feelings he had when he brought him into the world. More than anything, Noah makes sure that his son knows that he’s down for him through thick in thin, giving him some very strong advise that he can use from now til he grows old.

Doesn’t it feel like Noah is trying to squeeze in as much knowledge as he can before the end of the song? It’s like he has only 3:51 to explain everything he can before he goes away…. Very deep stuff.

Noah dedicated ‘Heartbeat’ to his woman, and through some very meaningful words, he shows just how much he appreciates being around her.

Throughout his verses, Noah simply wants his woman to have fun in the moment, both complimenting and uplifting her spirits. You can hear the joy and electricity from Noah on every line, as he takes full advantage of the positive energy that the instrumental gives off.

Noah keeps it all the way real about the negative things he sees in the world on this song.

I love how aggressive Noah is from verse to verse, calling out the things he doesn’t like (And he doesn’t hold back one bit).  Not only does Noah come with complaints, but he also comes with ways to fix the problem (You gotta respect that).

‘Rhyme Session’ is a lyrical exercise by Noah, in which he shows off his ability to rap circles around each and every rapper in the game.

On the first verse, Noah dismisses every other rapper in the game as competition, finding unique ways to prove he’s the absolute truth. On the second verse, he shows off crazy wordplay to the people, putting his words together like an ultimate pro. On the last verse, Noah bigs up his hometown (Brooklyn) by closing the track out with this super hero like feel. After hearing all three verses, I do not know what else he can do for us to prove he’s a pretty darn good rapper.

I had to double check to see if I was still listening to a NoahSoundz album, because this song has this dark/paralyzing sound to it that is different from the rest of the tracks on this album.

Somehow, Noah was able to turn this numb sounding track into this enlightening masterpiece that explains the importance of valuing the right things in life. Through some very animated bars, Noah gives some reasoning behind his way of thinking, and I find his reasoning to be fair and inspiring.

This might be the most dynamic song on the album.

‘Because of You’ is joyful, is colorful, and shows yet another genre that Noah is able to tap into.

Noah dedicated ‘Because Of You’ to his parents, as he discusses how they helped guide him to be the man that he is now. No lyric is wasted by Noah on his verses, as he gets real in depth about the things they did for him growing up.

I for one can appreciate a track like this, because I feel my parents were the best role models for me. You can never thank good parents enough for the impact they had in your life.

‘You Are The Reason’ lets the world know who Noah relies on to give him strength, and that is his LORD and savior Jesus Christ.

I feel like the chorus on this song takes you back to church, as it has this choir-like sound to it that reminds me of a Sunday service. Noah feeds off the energy of the hook, dropping a few verses that revolve around him being thankful for the LORD’s blessings. Noah gives examples of the times he was down, and the times he was up, and how the LORD has blessed him in both scenarios. His part is very relatable, and one that will make you go back and verify how blessed you are by our father.

With many of the songs on this album revolving around NoahSound’s life, in this one he takes the time to tell the story of Christ instead.

Noah’s main intention on this song is to convince the naysayers that Jesus Christ is the real deal, giving listeners an interpretation of how he sees the story of Christ as a whole. I like how exact Noah is telling his version of the story, as he tells it with this confidence that will certainly draw you in.

I enjoy this form of bible studying.

NoahSoundz main purpose on this song is to talk about how he’s overcome darkness through the faith that he’s placed in Jesus Christ.

On his verses, Noah talks about the frustrations that he went through earlier in his life, and how he’s relied on his faith to overcome them all. Once again, this is a song that you can hear the pure pain/passion from Noah, as he raps with this desperation that makes this track feel sacred.

‘Between The Lines’ should not only be Grammy nominated, but it should also be considered for an Oscar too!

On this song, Noah tells the story of two lovers that have been able to endure all the trials and tribulations that come with being in a relationship. Over the dramatic beat, Noah is able to ingrain this idea of resiliency into the listeners minds, giving examples of when the lovers could’ve given up but instead got stronger. The words Noah spews are beautiful, and one that can help anyone that doesn’t see the silver lining in staying in a relationship that might have its toxic times.

‘The Fathers Way’ sorta reminds me of an old school Master P song.

You get lots of fast paced raps from Noah on this song, as he rides the southern flavored beat masterfully. In terms of the content, Noah keeps it real with us about how he moves these days, electing to follow in the same path as our LORD and Savior.

You know what I appreciate most about this song? Noah never tries to shove his beliefs down your throat, instead he gives listeners authentic examples of how he was able to change his life by following certain rules.

On his verses, Noah confirms to us that he gave it his all on this album, explaining to the listeners that he’s opened up in ways that he’s never done before. Additionally, Noah shows his appreciation to everyone that helped inspire him to make the album, and details why he decided to drop his first christian album with this release. For new fans of Noah, this track gives reasoning to where his career has taken him from day 1.

Out of all the Christian rappers I’ve heard in my life, NoahSoundz might be the most dynamic. It is pretty obvious that Noah is a phenomenal rapper, but when you mix his honest/unapologetic style to the equation, you get this compelling sound that stands tall above the rest of the pack.

Production-wise, the tracks are pretty consistent sounding, as most of the songs have this passionate feel. Rapping-wise, Noah keeps the same aggressive approach on each of the songs, attacking each track like it is his last. You can tell Noah was content in remaining himself on this album, something that adds to its consistency.

NoahSoundz does a really good job of talking about a variety of things going on in his life, finding a way to sprinkle in the impact faith has had during his journey. By the end of the album, I feel like you got a truly honest and heart wrenching performance from Noah, indicating to me that he left it all on the studio floor during the albums making.